Russell Wilson is the next Tom Brady, and here’s why 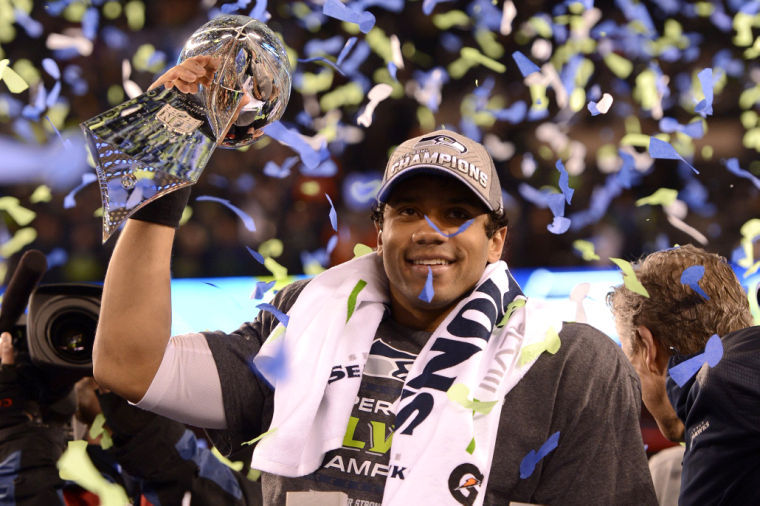 A young phenom surrounded by a talented team that has risen from the depths to new heights, quarterback Russell Wilson is only 25 years old and already has a Super Bowl ring. And now, Wilson has an opportunity to do something extremely special as he enters his third season in the NFL.

He has already won a championship before quarterbacks Andrew Luck and Robert Griffin III, an accomplishment that was not projected for a third-round pick. Luck and RGIII were first-rounders destined for superior achievement. Wilson needed to prove himself on the field, and now that he has the hardware to do so early in his career, his future seems to have no limits.

Sound familiar? It should. Not much was expected of New England Patriots quarterback Tom Brady, either. Yet, despite his poor placing in the draft order and being a backup for the team that selected him, Brady proved doubters wrong, just as Wilson is doing.

In only his second year in the NFL, his first full year of playing time, Brady took his team to the Super Bowl, leaving the door open for many more championships in the future. Wilson is in almost identical circumstances, making his window for subsequent Super Bowl victories similar to the one Brady had in the early 2000s.

The Seahawks just extended cornerback Richard Sherman’s contract by four years. With Kam Chancellor and Earl Thomas still under recently elongated contracts as well, the team has a strong secondary for the foreseeable future. Add in Cliff Avril and Michael Bennett on the defensive line, and it’s easy to see how the Seahawks owned the No. 1 defense last season.

Defenses like that don’t come along often, at least not as a collective unit. The Seahawks led the league in interceptions last season and were in the top 10 for both sacks and forced fumbles, according to the NFL website.

The Patriots, too, were adept in those categories during their reign in the early 2000s. They led the league in interceptions in 2003, and during that year they were in the top 10 in the other two areas as well.

The pattern continued in 2004, when New England was in the top five for sacks and forced fumbles and tied for seventh in interceptions. Defense was not something to be overlooked for either of the teams in their championship runs, and the Seahawks have the privilege to continue with their successful group.

Another important aspect of the Seahawks is their running game, which is anchored by Marshawn Lynch. Although he is currently under contract until the end of 2015, Lynch still has time to prove to Seattle ownership he needs to stay with Wilson to help win more championships.

The Seahawks finished fourth in the NFL in rushing yards per game last season, which is something the Patriots never did during their three Super Bowl seasons in 2001, 2003 and 2004. The only time they finished close to that was in 2004, when they had Corey Dillon’s services, which carried most of the load for the Patriots’ seventh-ranked running game that year.

Don’t forget about Seattle’s receivers, either. One of the biggest reasons New England has struggled lately is the team’s constant influx and departure of various receivers. In the Patriots’ good old days, Brady became comfortable with five targets who played with the team for at least two of their championship seasons.

Wide receivers Troy Brown and David Patten spent time with the team during all three Super Bowl years, while wide receivers David Givens and Deion Branch and tight end Daniel Graham lent their capable hands to the Patriots for the 2003 and 2004 titles. Not all of them had standout years at one time. In fact, none of those pass-catchers totaled more than seven touchdown receptions during those years. Graham and Patten both had that many in 2004. Familiarity made the difference.

Meanwhile, the Seahawks retained Doug Baldwin and Zach Miller, who each caught five touchdown passes in 2013 and tied for the team lead. Sidney Rice also returns and when he was on the field, he presented a serious threat through the air, too. Percy Harvin will be back for his second season with the team. If he can overcome injury and return to the old form he had with the Minnesota Vikings, the receiving corps will be formidable with all the familiar targets Wilson has at his disposal.

The only stark difference between these two teams is the strength of their divisions. The AFC East was soft during the Patriots’ reign and thus were able to compile a 16-4 record against divisional opponents during those three years. The Patriots were at least tied for first place in all three years as well.

On the other hand, the Seahawks were the best in the NFC West last season but had to settle for second place the year prior. Furthermore, the Seahawks posted a 7-5 record against NFC West opponents over the course of 2012 and 2013, meaning their division is much tougher now than what the Patriots dealt with more than a decade ago.

Nevertheless, Wilson and the Seahawks are in a perfect position to build a dynasty similar to that of the Patriots in the early 2000s. Legacies are earned, not given, and at this pace Wilson has the potential to prove himself even more to those who doubted him by leading his team to multiple championships in the near future.