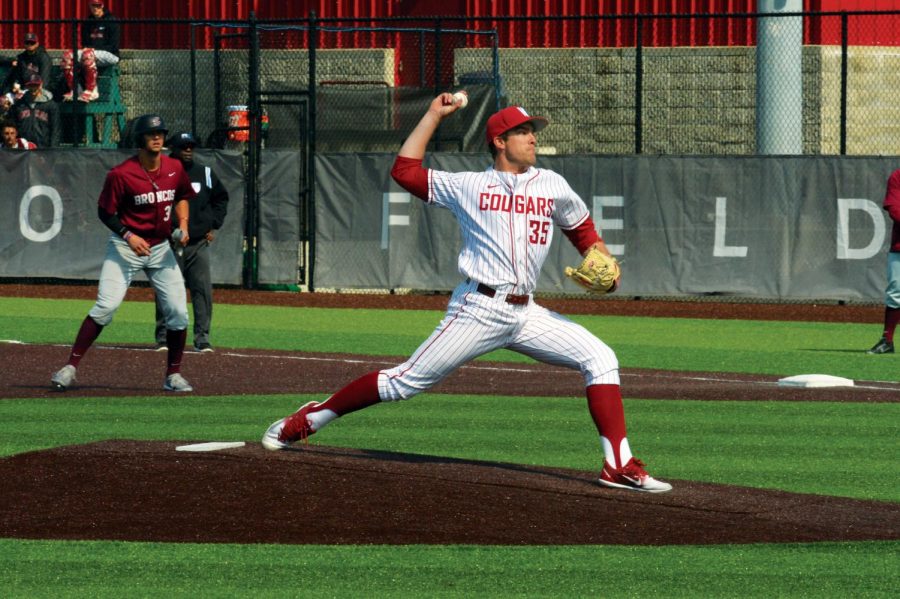 Freshman right-handed pitcher Hayden Rosenkrantz entered the game with a 4.88 ERA and made his fourth start of the season for the Cougars (15-25-1). He worked four innings, allowing one run on four hits.

The Trojans (21-23) got to Rosenkrantz in the fourth inning. Junior outfielder Chase Bushor led off the top of the inning with a double to left field and later scored on a groundout to give USC a 1-0 lead.

WSU answered back in the bottom of the fourth with two runs of its own.

Consecutive walks by senior first baseman James Rudkin and sophomore outfielder Danny Sinatro set up junior catcher Robert Teel for a two-run double. Teel’s double was originally called a home run before the umpires ruled it hit the top of the fence. WSU took a 2-1 lead.

After a 45-minute rain delay in the top of the fifth, WSU extended its lead to 4-1. Clanton added a solo home run over the flags in right field and senior outfielder JJ Hancock scored on a double by Rudkin.

Freshman left-handed pitcher Bryce Moyle worked a scoreless fifth inning in relief of Rosenkrantz. He allowed runners to reach first and third base with one out before getting a strikeout and a groundout to escape the jam.

The Trojans scored three times in the top of the sixth inning to tie the game at four. Freshman left-handed pitcher Conner Nantkes replaced Moyle to begin the inning and walked the only batter he faced before being replaced by senior right-handed pitcher Ryan Walker.

Walker walked his first batter before giving up a two-run double to redshirt junior infielder Stephen Dubb. Freshman Trojan infielder Jamal O’Guinn followed with a single up the middle to score Dubb and make it 4-4.

USC took the lead in the top of the eighth inning. Junior Trojan infielder Dillon Paulson doubled off Walker to begin the inning before O’Guinn drove him home with a single to make it a 5-4 game.

The Trojans extended their lead with three runs in the top of the ninth. Walker allowed a single to begin the inning before being replaced by redshirt sophomore left-handed pitcher Isaac Mullins.

A hit by pitch, a sacrifice bunt and an intentional walk loaded the bases for USC. Mullins then threw a wild pitch that allowed a to score before giving up a two-run single to Dubb that made it an 8-4 game.

Sophomore infielder Dillon Plew singled to lead off the bottom of the ninth. Clanton homered two batters later to cut the Trojan lead to 8-6. Rudkin flew out to right field to end the game.

Game two of the series is scheduled to start at 2 p.m. at Bailey-Brayton Field.