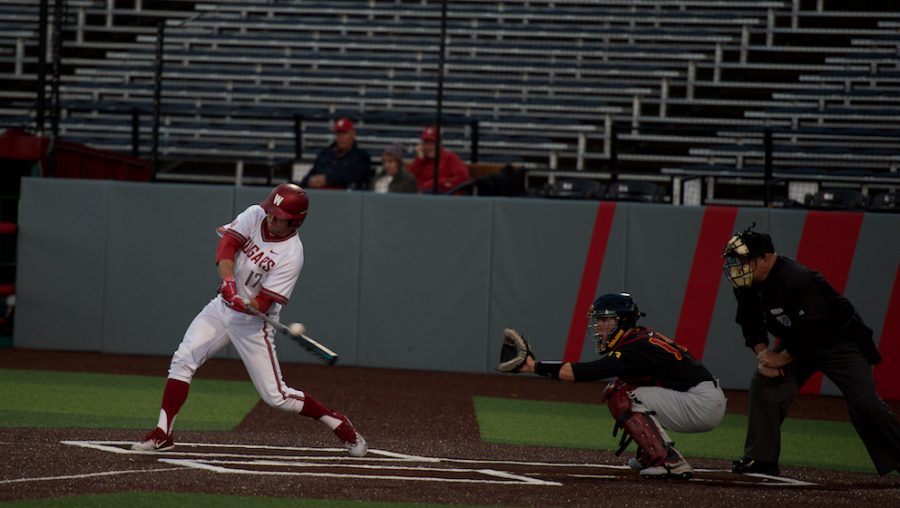 Senior outfielder Blake Clanton prepares to hit a pitch against USC on Friday at Bailey-Brayton Field.

Defense was on display early for the Cougars (15-26-1). Sunitsch allowed Trojans (22-23) junior infielder Chase Bushor to reach second base on a single and a wild pitch in the top of the first inning.

Trojans freshman infielder Jamal O’Guinn opened the top of the second with a single. After a pop out, USC junior infielder Brandon Perez drove a double off the wall in the left centerfield gap.

Sinatro fielded the rebound, threw to junior infielder Andres Alvarez who relayed it home to nab O’Guinn at the plate.

“The defensive plays in the outfield and the relays that happened to bury guys at home plate, I think it gave us good energy and momentum to go out and get a couple runs,” Lees said. “We were set up in the right positions and the relays were perfect and that’s the way it’s supposed to look.”

Sunitsch settled down and only allowed two hits after the second inning. He walked none while striking out five and lowered his season ERA to 2.69.

The Cougars scored two runs in each of the first three innings, something Lees said helped Sunitsch.

“As soon as Scotty got a couple runs on the board he got much better,” Lees said.

WSU added another run in the fourth inning on a double by senior outfielder Blake Clanton to extend its lead to 7-0.

Alvarez got his first career home run to deep left field in the sixth inning.

“It was crazy,” Alvarez said. “I was in a little slump, not having the best swings. I stayed with the plan … got something elevated and drived it pretty well.”

WSU totaled 12 hits including four doubles and two home runs. They drew four walks and only struck out six times. Lees said he was impressed with his team’s plate discipline.

“Proud of our kids, they gave everything they got,” Lees said. “They battled to the end. We’ve had some tough losses at the end but today we just flat out scored more than they did.”

Junior right-handed pitcher Parker McFadden will pitch for WSU in the series finale Sunday. First pitch is set for noon at Bailey-Brayton Field.