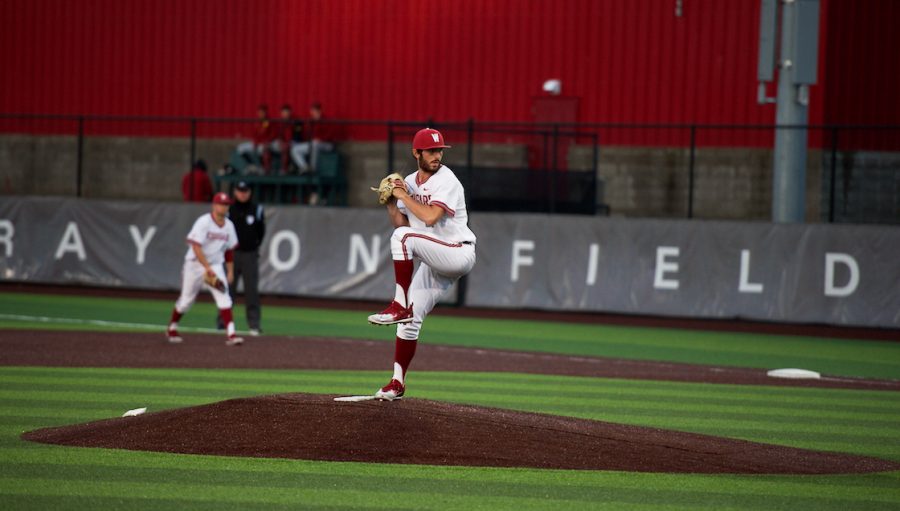 Senior right-handed pitcher Ryan Walker winds up to throw a pitch against USC on Friday at Bailey-Brayton Field.

WSU baseball lost 9-3 in the final game of a series with University of Southern California on Sunday.

The Cougars (15-27-1) faced USC (23-23) junior pitcher Solomon Bates and struggled to string together hits. Bates allowed two runs on five hits over seven innings of work while striking out seven in the process.

WSU drove a number of balls that forced the Trojan outfielders to backup, but few fell for hits.

“I actually thought we had some good swings on [Bates],” Head Coach Marty Lees said. “He’s not a Sunday starter he’s the Friday-Saturday, he’s the best of the three for me.”

Junior right-handed pitcher Parker McFadden started on the mound for WSU. McFadden allowed a leadoff single and two straight walks to load the bases in the second inning. After a strikeout, he allowed two bases loaded walks to give USC an early 2-0 lead.

Sophomore left-handed pitcher AJ Block replaced McFadden in the second inning. He stopped the damage in the second and worked a scoreless third before giving up four runs in the fourth to extend the Trojans lead to 6-1.

The Cougars held USC scoreless until the eighth when an infield popup fell in front of senior first baseman James Rudkin after he lost it in the sun. The next batter faked bunt, slapped a single through the hole at third base and the Trojans later scored on a sacrifice fly.

USC added to its lead with a two RBI double in the top of the ninth.

“We continue to give up two, three and four runs an inning instead of maybe shutting those floodgates and maybe giving up one or two,” Lees said of his pitching staff. “The pitches are not perfectly located whatsoever and that’s why you see balls that are going off the wall.”

The Cougars wrap up their homestand 5 p.m. Tuesday against Gonzaga University at Bailey-Brayton Field before playing Stanford University on the road.