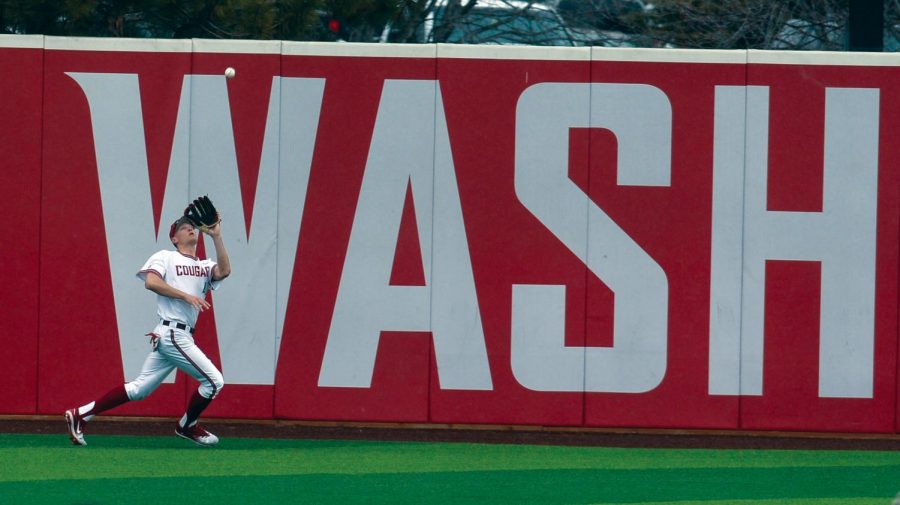 Senior outfielder JJ Hancock looks in a fly ball and prepares to catch it in a game against Saint Mary’s on March 8 at Bailey-Brayton Field.

Nine seniors will step on Bailey-Brayton Field for the final time when WSU baseball hosts University of Utah for a three-game series starting Thursday.

The teams will battle for last place in the conference standings this weekend with WSU (15-31-1) holding a game and a half lead over the Utes for 10th place.

“The only acceptable outcome for the weekend is winning,” Head Coach Marty Lees said. “We just got to play good baseball. I know people have talked about us being real close. We’ve played a lot of one run games, but close is not winning.”

WSU has struggled on the mound this season, posting a 5.51 team ERA. Utah is the only team in the Pac-12 who has fared worse on the mound than the Cougars this year, with a team ERA of 6.58.

Cougar pitchers will have their hands full with Utes junior outfielder DaShawn Keirsey Jr. who sits third in the conference with a .397 batting average and the Pac-12 leader in doubles with 23.

Senior outfielder Blake Clanton leads the Cougars with a .333 batting average and his .633 slugging percentage is eighth best in the conference. Junior infielder Justin Harrer’s 10 home runs are tenth most in the Pac-12.

Lees said he is excited to see his seniors play in a Cougar uniform for the last time and will use the final series of the season to prepare the younger players for the summer and next year.

Despite their record, Lees said he is proud of the way his team has competed throughout the up and down season.

“I am impressed and happy with the way these kids grind,” Lees said. “They compete and they truly never do give up even though they’ve been in some lopsided affairs.”

First pitch is set for 4 p.m. Thursday at Bailey-Brayton Field and can also be seen live on Pac-12 Networks. The second game of the series will be contested at 4 p.m. Friday and the series finale will start at noon Saturday.