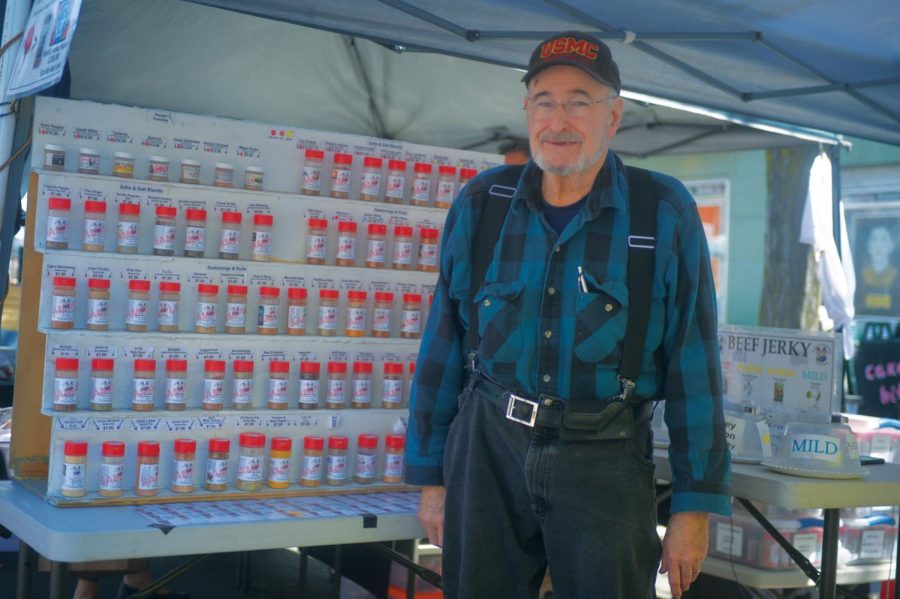 Ray Templeton, owner of Redneck Seasonings, shows off the variety of spices he offers at the Moscow Farmers Market on Saturday.

Ray Templeton, owner and founder of Redneck Seasonings in Moscow, started his business with the goal of providing spice-seekers willing to submit their stomachs and taste buds to a bit of suffering for the flavors they crave.

His son-in-laws were Templeton’s original inspiration and taste testers.

“They’re crazy heat freaks,” Templeton said. “I wanted to make something that was too hot for them, and then I branched out with other unique flavors.”

Redneck Seasonings currently produces and sells dozens of seasonings, from mild barbeque flavors to blends with the hottest peppers in the world. Templeton has to wear a respirator mask while creating the seasonings to protect his lungs from the “vile pepper powder infused air.”

Most of these seasonings are flavors that can’t be found in stores. Templeton’s best-selling seasoning over the past several years has been The Kraken, which he described as “ungodly hot.”

“Vanilla salt is pretty hard to find in stores,” Templeton said. “Charon has a sweet beginning with a lasting, haunting smoky flavor.”
Templeton characterized several of his unique creations as difficult to describe.

“You have to taste it to understand it,” he said about his Memphis Belle barbeque seasoning.

Redneck Seasonings also sells jerky flavored with the spice mixtures Templeton creates. The beef jerky he sells is given high praise by anyone that walks by his booth at the market and has a taste, he said.

Other products Redneck Seasonings has put its spin on include teas, coffees and candies.

Templeton said the creative and unique aspect of creating any spice mixture that finds its way into his head is his favor part of the business.

Templeton has brought Redneck Seasonings to the Moscow Farmers market for the past several years and has become a staple of the event.

“I love getting to talk to people and meet my loyal customers,” Templeton said. “At the market, I get to recommend flavors of my own creation that I think people will like and I really enjoy that.”