Expressing passion through her artwork 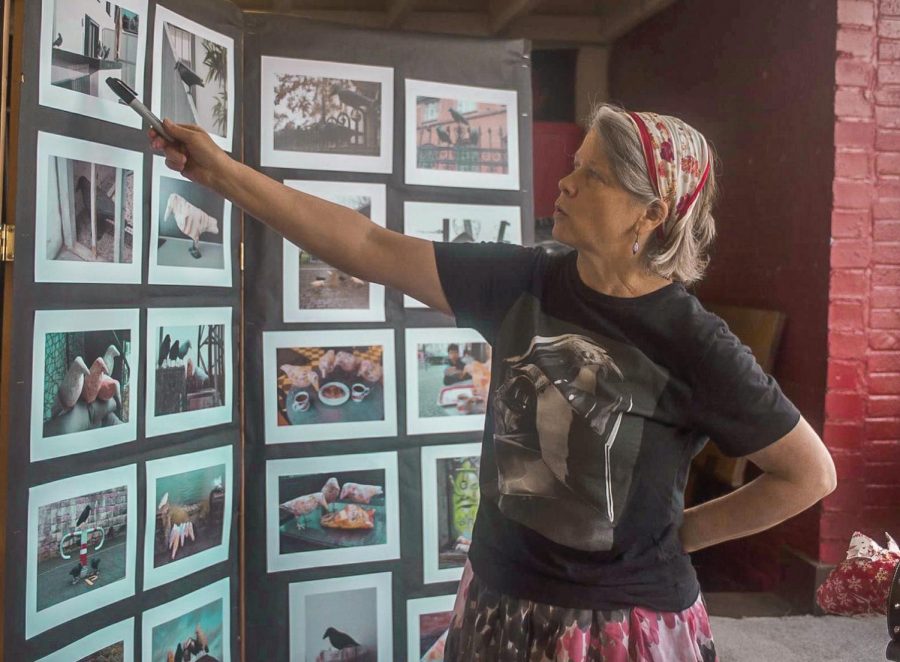 Rhonda Skaggs explains how she was inspired after a trip to Germany to create paper mache birds during the Pullman ArtWalk on May 19.

Rhonda Skaggs has learned to use her artwork to represent many of her different loves.

Skaggs has had an interest in art since she was a child and began her university experience as an art major. For nearly a decade, she volunteered with the Pullman School District and taught art at Jefferson Elementary School.

“Almost every type of learning needs some creative aspect,” Skaggs said. “Teaching children how to be creative and that art is a way to do that is very important to me.”

Skaggs now runs her own art studio in Pullman called Red Dog Art Room and offers art lessons to both children and adults.

As the name of her art studio suggests, dogs have been a huge part of Skaggs life for years. The name itself comes from her current dog, a red heeler.

One of her art series consists of several paintings of popular rock and roll album covers that replace aspects of the covers with dogs. Her first piece is entitled “Bark Side of the Moon” and replaces the triangle in the center of the Pink Floyd cover with an image of Skaggs previous dog, Rio.

In these pieces, Skaggs was also inspired by the idea of street art. She made a stencil of her dog and used only two colors to create the images.
“I found that I had endless possibilities and I loved the challenge,” Skaggs said. “The paintings aren’t serious, but it’s always fun to see how I can work the dog into a popular image like an album cover.”

Recently, Skaggs traveled abroad to Germany, where she began another series. All over Germany, statuettes of ravens are used to deter other birds from building nests in popular areas.

Skaggs was drawn to the statuettes of these ravens and began to make her own birds from cardboard and paper mache.

She later used this technique to teach the students she worked with about different types of birds and wildlife, another passion of hers. She likes being able to share her 3D work with those around her.

“It doesn’t cost a lot and I’m not limited [in] what I can create,” Skaggs said. “I can make pretty much anything out of cardboard and paper mache and I think it’s important that people know they have that opportunity as well.”

Skaggs said she tries to use her art studio to provide adults who want to be creative with a starting point.

“I know a lot of adults who want to do creative things but they’re scared because they don’t know how,” Skaggs said. “I have all kinds of media here that they have the opportunity to play with and decide if they enjoy it or not.”

Skaggs hopes providing community members with an unique experience will drive them to be more creative in their lives.

“There’s no pressure to finish something or even make something you like,” Skaggs said. “If you have an experience, you have a starting point, then you have the ability to be creative in your own life in whatever way you want.”