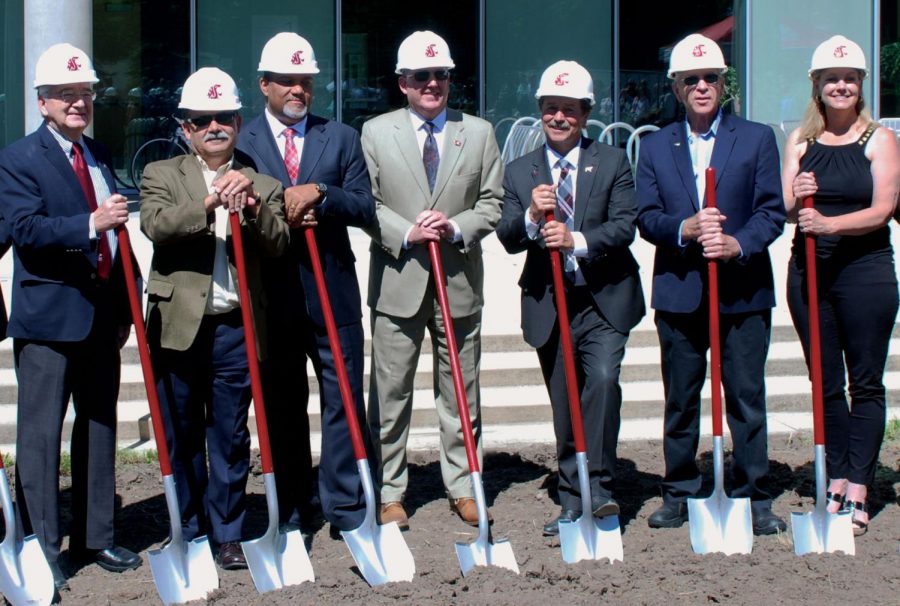 A group of administrators and state officials break ground at the location of the new plant sciences building Wednesday.

The state of Washington will provide $52 million in funding for the project, according to a WSU news release. Construction of the building is expected to be finished by January 2020.

President Kirk Schulz said the building will not only allow for further research, but also shows the level of work being done currently at the school.

Schulz, who gave thanks to many people ranging from state legislators to school faculty and staff, also said Washington is unique for being a state which financially supports higher education, leading to projects like the new building.

He also said WSU has benefitted from support from many outside sources, making these types of projects possible.

“We have people coming to the table with resources that have … allowed us to do some pretty wonderful things,” Schulz said.

He also said this outside support was important not only for students, but also for Washington’s farming industry.

“[They] keep us competitive so farmers and ranchers have the tools they need to be successful,” Schulz said.

CAHNRS Dean Andre-Denis Wright, who began his term a little under a month ago, also spoke at the ceremony and said the addition of new facilities helps with recruitment of high-level faculty.

“They allow us to attract and retain top-level scientists who know they have the tools and support to conduct ground-breaking research,” he said.

Schulz also spoke about recruitment and said this project has helped WSU reach the high level of student enrollment the university expects this year.

State Sen. Mark Schoesler, R-Ritzville, of Washington’s ninth legislative district, who Schulz named as a key force in obtaining the funding for the building, said the ground breaking is a “bright day for agriculture in Washington and the world,” as the research done at WSU affects practices around the globe.

Schoesler also pointed to the new Cosmic Crisp apple created by WSU as evidence of the level of research conducted at the university.

The other speaker was Mike LaPlant, president of the Washington Farm Bureau, who called WSU an “integral part of the agriculture industry.”

LaPlant also said the organization is looking forward to collaborating with the work conducted using the new facility in an effort to help ensure food security for people worldwide.