‘A beacon of light in so many ways’ 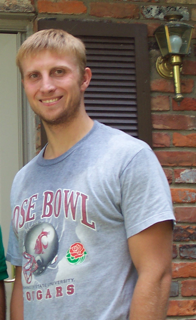 Joy Zornes, her family and the small town of Oakesdale, Washington, have had to deal with the loss of Joy’s closest friend and brother Peter for the past 12 and a half years.

To honor him, Joy, her mother Kathy and father Tom have worked as a family to put on the Peter Zornes Memorial Golf Tournament.

The annual tournament will be held 10 a.m. Saturday at the Colfax Golf Club for the 11th straight year. Joy said her family decided to put on this event so Peter’s life and legacy could continue beyond his death.

“All of us kind of realized that we didn’t want Peter’s life to be only about the end,” she said. “We didn’t want it to be a really awful story, we wanted him to be able to have a better story.”

Peter would return to Whitman County 18 months later for another research position at a bio-tech firm started by a former professor. But on Dec. 10, 2005, he was killed in a double murder-suicide inside a Pullman condominium complex. He was 25 years old.

Joy said when she heard the news, it was devastating.

“We talk about being heart broken, but I felt so broken and heart sick,” she said. “I knew I could always cry on his shoulder, that’s just who Peter was.”

In the days after his passing, Peter’s family began thinking of a way to memorialize him to make his death more about his goals and aspirations and less about what happened at the end of his life.

They decided creating a scholarship in his name was the best way to do this, so they worked with the neuroscience department at WSU to create an endowment called the Peter A. Zornes Memorial Neuroscience Scholarship, Joy said.

To get the scholarship fully-endowed, the Zornes had to raise about $25,000 in five years, Joy said. After realizing they had to raise the money as fast as possible, the family decided to hold a golf tournament, Joy said.

In 2008, Peter’s family was able to organize a tournament and award the first Peter A. Zornes Memorial Scholarship to a neuroscience student at WSU despite it not yet being endowed.

Joy said she and her parents had no idea what they were doing when they first started hosting the event. She even recalled searching the Internet for answers on how to hold a golf tournament as they were setting things up the night before the first tournament and finding results that her mother couldn’t believe they didn’t find before.

The tournament was only supposed to be a one-time event, but Joy said people kept coming up to them and suggesting what they should do differently the following year, so they continued to host it.

“The rest is history,” she said.

People come from all over to participate in the event and remember Peter, Joy said.

“I’ll never forget that for the first two, three months [after his death] something would happen,” she said, “and I would pick up my cell phone to send him a quick text message or call him and I would be halfway and [think] ‘oh yeah he’s not going to answer.’”

For the first few days after his death, Joy said her family struggled coping with Peter’s passing as the details of the incident slowly came out but the 400 or so people living in Oakesdale were there for them when they needed it most.

Joy recalled having half of the town in their living town within 24 hours of the incident and before they officially knew Peter had died.

The town even led the effort to have the scoreboard at the local high school baseball field named after Peter, and the Zornes had to put a stone bench next to his grave because so many residents visited Peter for hours at a time, Joy said.

“We came together and grieved and even though we are all the time working to move past it, we’re doing it together,” she said.

Peter became interested in neuroscience after visiting WSU with Kathy and talking to people within the department, Joy said. Peter quickly became fascinated with it, growing ambitions of developing medicine that could save lives and hoping to learn things about the brain that had yet to be discovered, Joy said.

Peter was also gifted athletically and had to turn down a chance to play on the WSU baseball team in order to pursue his academic goals, Joy said.

The scholarship the Zornes family created aims to continue Peter’s dreams by giving back to neuroscience students at WSU that are headed down the same path and looking to make an impact, Kathy said.

Joy said this scholarship allows all the work Peter started or would’ve completed had he still been alive to be continued by others.

“To us Peter was … just a beacon of light in so many ways,” she said. “It felt like if we didn’t take an active stand against the darks that took him it would ultimately allow that to be his defining factor, his defining characteristic.”

Recipients are neuroscience students of junior or senior based on a number of factors including if they are goal-oriented, compassionate and enthusiastic. Joy said the Zornes gets to review all the applications sent in and offer their thoughts on who should be selected, but ultimately the final decision rests with the neuroscience department.

Kathy said the amount of money awarded from the scholarship varies depending on the quality of the applicants and how the fund is doing, but is usually between $1,000 and $2,000.

She also said the tournament has evolved over the years and become more about what the scholarship fund will do for the recipients who she believes have qualities that Peter possessed.

“Through that tournament we’re providing an opportunity for people to gather,” Kathy said, “and to spend just a pleasurable, enjoyable [time] doing something that contributes … which will matter because neuroscience impacts so many of us in so many ways.”

Neuroscience has had a significant impact on the Zornes family beyond just Peter. Kathy said on Christmas Day last year, her husband had a stroke caused by congestive heart failure and neuroscientists were able to get medicine to him in time to prevent long-term effects.

In March, Kathy said doctors discovered a tumor at the base of Joy’s brain and neuroscientists had to perform multiple surgeries to remove it.

Kathy said they were able to see the impact of neuroscience first hand and what the funding they’re providing students with through the scholarship could end up doing.

“When you think about the lives that will be touched, just the scope of that,” she said. “Maybe somebody else in another town is going to have their daughter or mother or somebody saved by one of our [students] someday.”

The Zornes are still looking for people to register for the golf tournament and have plenty of open spots, Joy said. The entry fee for the event is $85 and includes participation in the 18-hole scramble, a catered meal, a polo, a gift bag, golf balls and involvement in contests and a silent auction.

For more information and to register visit peterzornesmemorialgolftournament.com.

Joy said it’s been difficult not having Peter around, but this tournament and scholarship is helping keep him alive.

“It’s like I have a lifetime of memories that I don’t share with anybody else anymore,” she said.