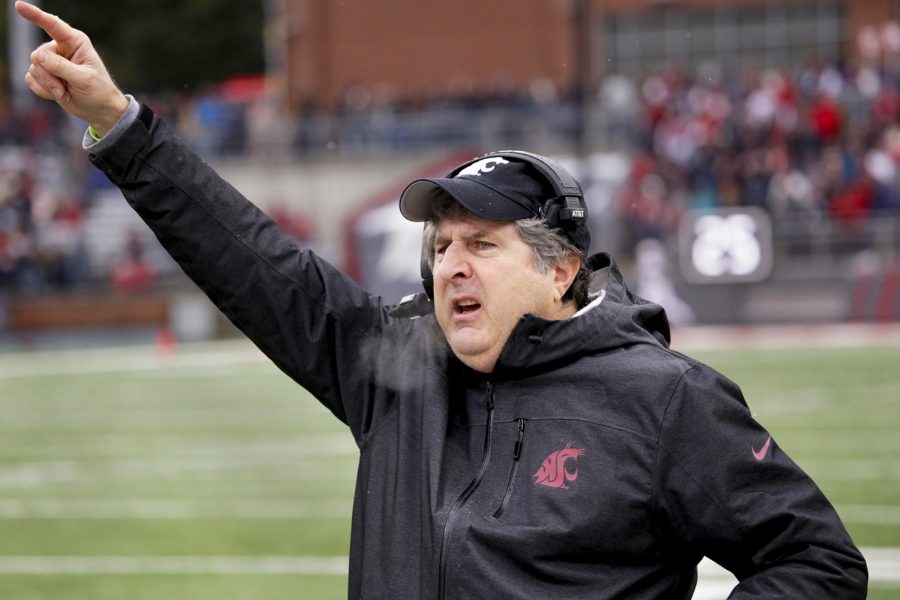 WSU Head Coach Mike Leach disputes a call during a game against Stanford University on Nov. 4.

Some of the usual antics Leach partakes in at his pressers were more reserved while he sat in front of a national audience. His full presser went a little under 25 minutes. Some questions he dug into, some he gave the classic levelheaded coach’s response.

Leach started his presser fielding questions about the death of Tyler Hilinski. Leach kept his responses short and quick when it came to addressing how he and the team have handled Hilinski’s death.

“We all have very fond memories of Tyler, were proud that we had the opportunity to know him,” Leach said. “But then also, he would want us to … move on and have productive lives and elevate what we can do.”

After a few questions regarding Hilinski and his approach to dealing with mental health, Leach was asked about how he gets recruits to come to the Palouse. The question nearly sent Leach into a rant on how terrible traffic in Los Angeles is, but he showed restraint and got back to what makes Pullman a fantastic place.

“We’re a college town and we offer something that they don’t,” Leach said. “You guys might love the traffic in L.A., there’s a lot of great things about L.A., you might sit in the car listen to the radio, look at the person beside you, get flipped off … well you don’t get to do that in Pullman.”

Leach added that the pride Cougar fans have for their team is what sets WSU apart.

Another inevitable question Leach was bound to face was how the Cougars would handle all the coaching changes, with five coaches from Leach’s staff leaving during the offseason.

Leach pointed out he has developed a talented coaching tree over the years that has led to many of his assistant coaches getting opportunities to advance their respective careers elsewhere.

He said the new voices in the coaching room fit in perfectly right away.

“We got another group of guys now, it has been a fairly seamless transition,” Leach said. “That’s one thing that is beneficial offensively with me coordinating the offense, as we get new coaches, we aren’t reinventing the wheel, it’s the same deal. I’m there to plug everyone in.”

The next topic for Leach was the prospect of being forced to give out an injury report, which he doesn’t currently.

Leach pointed out that he is in fact not a doctor, thus making him unqualified to talk about injuries. Then, he cited laws that prevent revealing someone’s medical record and the legalization of sports gambling as a situation where he will be wrong one way or the other.

Whether it is because he isn’t a doctor or he truly believes it’s a legal issue, Leach said he won’t be revealing injuries anytime soon.

“I’m not going to reveal injuries, even if I’m qualified to, until I’m forced” he said. “They might force me, I doubt it, but they might and if they do well I’ll try and figure out a way around it.”

“The challenge for us is going to be to select the right guy,” he said. “But I think we’d probably have three or four choices, all of which would do a really good job.”

For the last seven minutes of Leach’s presser, media members made an attempt to send Leach on one of his classic rants but none of the questions seemed to strike a cord with Leach.

He took a question about Jimmy Buffet’s song “A Pirate Looks at Forty,” being written about him, which Leach responded to nonchalantly stating he doesn’t know Buffet and he has no knowledge of that.

Another reporter wanted to know where around the country Leach loves going, to which Leach answered with his favorite recruiting destination of “The Inland Empire” in Southern California.

Leach didn’t take any questions regarding his Twitter usage that put him in the spotlight this summer after he tweeted out a fake video of former President Barack Obama insulting citizens’ intelligence on June 17.

Leach’s full press conference can be viewed at Pac-12.com and below is a transcript from his appearance at the podium.