Soccer kicks off season against Redhawks

No. 21 Cougars will face two teams in three days at home 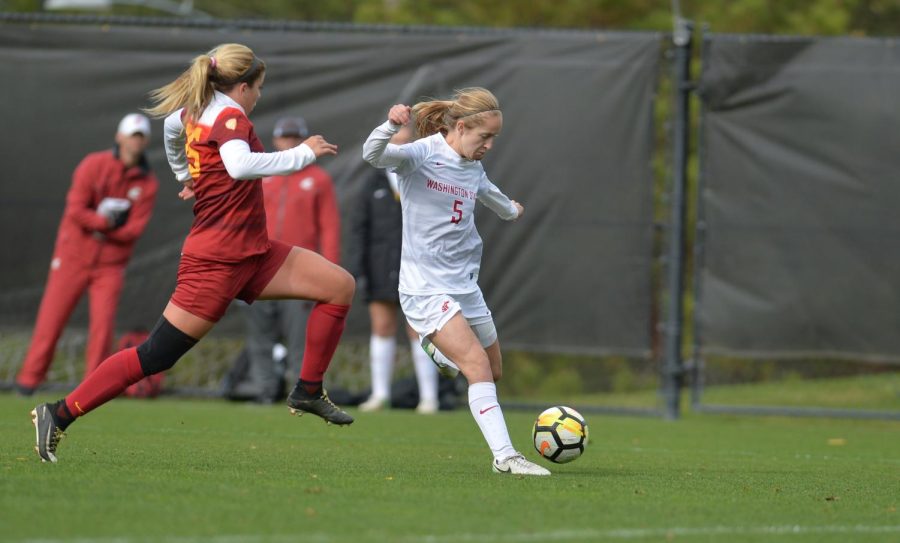 Then-freshman Jamie Rita takes a shot in the final seconds of a game against USC on Oct. 22, 2017 at the Lower Soccer Field.

No. 21 WSU soccer will start their season this weekend when they face Seattle University and Grand Canyon University in Pullman. It starts Friday with a night game against the Redhawks. Then the Cougs will rest up Saturday before they battle GCU on Sunday.

“We know we’re in for a battle Friday night, [there will] be a lot of Northwest players and West Coast kids showcased here,” Shulenberger said. “We expect a great game from Seattle U but we know we’ll be ready too.”

The Cougars lead the all-time series over the Redhawks with a 12-1-2 record against them. On top of that winning record, WSU is 9-3-1 in home openers. WSU is ranked after finishing last season by making program history when it reached the third round of the NCAA tournament.

Sunday will mark the first-ever meeting between the Cougars and the Antelopes. Shulenberger said that GCU Head Coach Derek Leader is a friend of his and has made the team competitive.

“Grand Canyon is new to our schedule,” Shulenberger said. “Derek Leader, a friend of mine [and] a good coach, [is] really turning that new program around … so we know they’ll be ready as well.”

WSU is coming off an exhibition win after defeating University of San Diego last week.

The Cougs visited San Diego for their first and only preseason match, where they needed a late comeback to secure the victory.

The increase in pressure lead to two different Toreros players receiving yellow cards, while another received a straight red card for a late challenge in the 80th minute.

With USD reduced to 10 players, the Cougars pressed on, mounting pressure that culminated in senior defender Maddy Haro’s equalizing goal in the 83rd minute.

With an exhibition victory and a record breaking 2017 season under their belts, the Cougs will look to continue their success under Shulenberger, who signed a new five-year contract at the end of last year’s historical season.

The two upcoming matches will set the tone for the rest of the season, Shulenberger said.

WSU faces Seattle at 7 p.m. Friday. The Cougs finish the weekend when they play Grand Canyon at 1 p.m. Sunday. Both games are at home and will be played at the Lower Soccer Field. The games will also be broadcasted live on Pac-12 Networks.