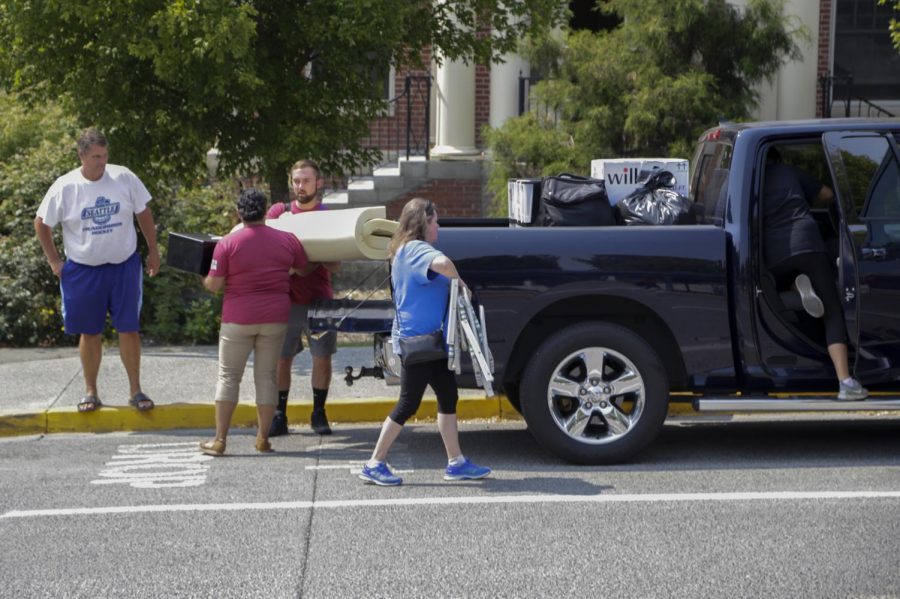 Proud parents flood campus as their children prepare to move onto the WSU campus.

Housing and Residence Life has had to remedy an overflow of housing applications by creating more space in residence halls.

“Our first-year numbers are very important to us to make sure we have those spaces available,” Hamada said.

One solution he said they came up with was reopening Waller Hall, a hall which has not been open for several years, after testing the systems over the summer to make sure they were capable of housing people there.

Another option they pursued was to make half of the rooms in Orton Hall, which is already half-occupied by singles, doubles, Hamada said. This allowed them to yield more space for that facility, he said.

“If a floor is not fully occupied, it kind of feels like a ghost town,” Hamada said.

Typically RAs have their own rooms, but because of the overflow, some RAs are sharing rooms with their residents, Hamada said.

If there is anyone he would gamble on putting a new Coug with, Hamada said, it would be an RA. However, they are trying to limit these numbers because they want to avoid putting people in temporary living situations.

“An RA having a roommate is truly a temporary housing circumstance,” Hamada said. “We want people to have a permanent home for the academic year.”

Getting the exact number of students who will be living in residence halls is a difficult number to collect, he said, but from his understanding, this year’s yield is a little higher than normal.

“It is a very difficult sort of numbers game,” Hamada said.

As for making sure this does not happen again in the future, Hamada said there will be meetings to discuss how to plan better in the future. He does not believe the university was being frivolous with acceptances, but that there were a lot more applicants who followed through with staying in the residence halls.

As for student feedback, Hamada said he did not see or hear anything unusual when he was around for move-in. He said Housing and Residence Life tried to let students know in advance if they would be living in a triple, as well as making sure they were logical about which rooms were turned into triples. He cited the corner rooms in the Stephenson Complex as an example.

However, Hamada said they are also willing to accommodate for people who do not want to be in a triple.

“If people aren’t happy,” he said, “we’d be more than happy to listen.”

In terms of price, students living in triples pay 25 percent less than they would for a double and RAs who have to share a room receive a $200 increase in their perk packages, Hamada said.

Hamada said he was hyper-sensitive when he was going around for hall openings because he does not want anyone to have a lesser experience. He said he wants everyone to feel like they are a part of the Coug family when they come to WSU and wants them to have that same feeling of pride no matter what.