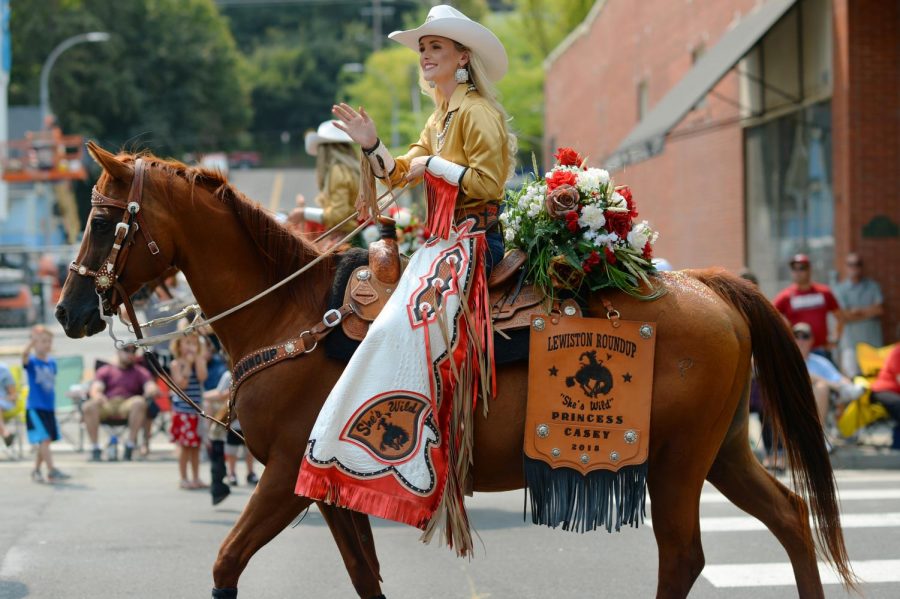 This weekend, Pullman celebrated the 30th annual National Lentil Festival. The city of Pullman’s claim to fame always takes place the weekend before classes start, giving the students the opportunity to explore their new home.

“It’s a great introduction for the freshmen to their new community,” festival director Britnee Packwood said. “It’s free entertainment at the end of Week of Welcome that lets students relax and have fun before classes start.”

As always, the festival began with the world’s largest bowl of lentil chili. New students, community members and even the youngest of lentil-lovers enjoyed free cups of lentil chili and marveled at the massive bowl holding over 350 gallons Friday night.

After getting a bite to eat, festival-goers walked through the marketplace along Spring Street. Many local businesses showed examples of their products and offered fun ways for anyone to get involved in the community. Several different WSU sports teams signed posters and talked with fans and fellow Cougs.

WSU sophomore Emma Adams grew up in Pullman and has attended the Lentil Festival almost every year since her childhood.

“I’ve been my whole life and even ran a booth for a cookie business when I was younger,” Adams said. “I love the chili and just getting to hang out with friends.”

Lentil Land had bounce houses and a juggling school to keep the kiddos entertained in a safe environment, while their parents had the opportunity to enjoy the beer and wine garden and live music.

Saturday activities started bright and early with the Tase T. Lentil 5K Fun Run at 7:30 a.m. Other activities took place throughout the morning, such as the Lion Club Lentil Pancake Breakfast. Several sports groups held tournaments, with one for tennis, mini golf, softball and 3-on-3 basketball.

At 11 a.m., the Grand Parade began with the Little Lentil Sprouts riding their bikes down Grand Avenue and up Main Street. Several distinguished Pullman families and businesses drove through the parade waving to the kids lining the streets and tossing candy to everyone.

“Students are moved in and settled enough to explore their town,” Packwood said. “Businesses get to showcase themselves to students and welcome them to the community.”

Several participants performed dance numbers, cheer routines and even small snippets of plays throughout the parade. Many Whitman County elected officials also participated in the parade to thank the community members for their support.

The Pullman School District participated in a variety of ways to showcase their wide range of clubs and ways students can get involved, such as the younger elementary-level classes dancing and waving to their community and the band programs working together to march in the parade.

The Grand Parade wouldn’t be complete without the town getting excited about WSU. The spirit squad led on-campus groups, including the Cougar Marching Band playing a few classics. Several WSU sports teams showed their support for Pullman by waving to the youngest members of the crowd and offering them candy to fill their nearly-overflowing bags.

Finally, Tase T. Lentil in his Lentil Express finished the parade, exciting the crowd even further.

Over the course of the day, local chefs Jamie Callison, Patty Brehm and Gretchen Stoops Luongo, led cooking demos to teach students and community members alike how to cook with the star of the festival: lentils.

“Lentils are an economic food, they’re really versatile and full of protein,” Packwood said. “The students can learn how to cook lentils in a different way than they would’ve thought and save some money in the future.”

To close out the festival, the Legendary Lentil Cook-Off celebrated the five finalists’ lentil-themed creations. The finalists came from all over the country and cooked dishes that used lentils in different ways. Elizabeth Koseyan made a Mediterranean lentil and eggplant crostini, Hidemi Walsh made a caramel lentil cheesecake, Jodi Taffel made baked lentil empanadas, Margee Berry made Seattle-style salmon bowls and Ronna Farley made cinnamon lentil mini pies.

“The festival brings people together and celebrates something that’s foundational to Pullman’s history of farming,” Adams said.