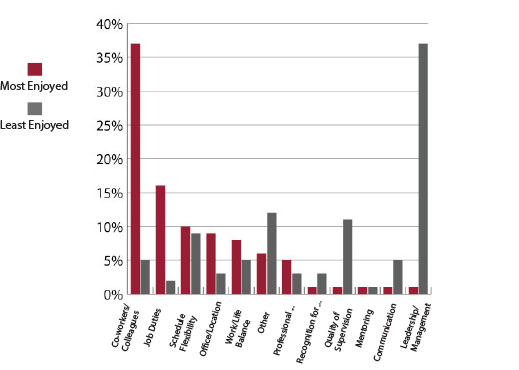 Leadership and management were listed as the least enjoyed portion of WSU’s workplace climate in a fiscal year 2018 survey conducted by Human Resource Services. Co-workers was the most enjoyed.

WSU recently released employee exit survey numbers with outgoing staff and faculty, marking quality of supervision and lack of career advancement opportunities as the most-disliked aspects of their time at the university.

Phil Weiler, vice president of marketing and communications for WSU, said the university tries to look at multi-year trends rather than single-year statistics, but the school is still taking the results about supervision to heart.

“I think the raw numbers are less important than the trend,” Weiler said. “We definitely saw a trend that we could do a better job training our managers and supervisors.”

Of those asked, 29.8 percent responded to the survey, up from the average of 15 percent, according to the data.

Quality of supervision was the most-cited reason for leaving the university, with 22 percent of respondents saying it was what made them depart from WSU, according to the data. Retirement and workplace climate were the next-most cited reasons, both coming in at 21 percent. Lack of advancement opportunities was the next-highest at 15 percent.

Weiler said President Kirk Schulz has asked for action to be taken in regards to supervisor training.

“The President has asked for us … to look at how we do trainings across the system,” Weiler said.

He also said that while the results help the university improve, people should also keep in mind who is filling out the surveys and the differences between those people.

“One thing I would say is you have to think about who is likely to be filling out a survey of this kind,” Weiler said. “There is going to be a number of people that had a certain type of experience.”

He also said the school was happy with turnout for the survey. Weiler commended Human Resource Services for making an effort to gather more responses.

As for the most-enjoyed aspects of working at WSU, benefits packages as well as professional and educational opportunities were the top two areas, according to the data.

The least-enjoyed workplace culture area was leadership and management with 37 percent of those surveyed marking it as their least favorite, according to the data. Twelve percent marked other while 11 percent cited quality of supervision. No other area reached double digits in the least-enjoyed category, with a plethora of reasons, including work-life balance and communication, in the single-digits.

In addition to the other reasons for leaving, salary was an area that former employees were disappointed with, as 26 percent of those responding said they were not pleased with their wages, according to the data. However, it was not a commonly referenced reason for voluntarily leaving. Weiler said this wasn’t necessarily surprising.

“People would like to be paid more,” he said. “I think that’s probably common at most places.”