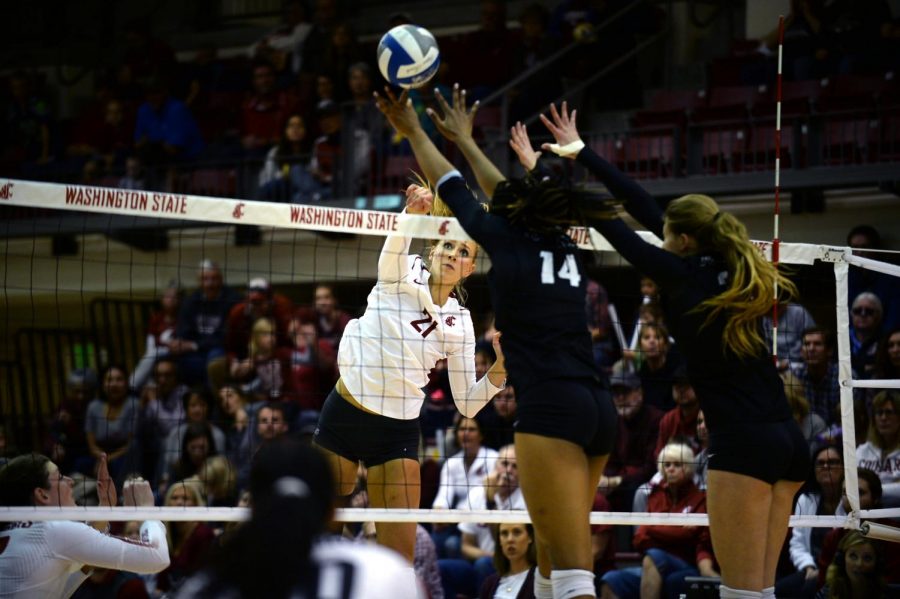 Then senior opposite Casey Schoenlein watches her spike fly past Colorado's blockers on Oct. 6, 2017 in Bohler Gym.

WSU volleyball started the 2018 season with a victory on the road. The Cougars traveled to Raleigh, North Carolina, to face Virginia Commonwealth University who they beat in three straight sets.

The Cougars started the first set off getting the first six points and never looked back. They took the first set by a final score of 25-13. The Rams settled in on the second set and kept it close with WSU.

Constantly battling back in the second set, the Cougs relied on senior outside-hitter Taylor Mims. Three of Mims’ eight kills in the match came within the last five points in the second set to give WSU the 25-22 victory.

The third set of the day started out close and looked to be another difficult set for the Cougars as they were only up 15-14 at one point. From there, WSU closed the set on a 10-4 run and won by a score of 25-18.

Mims recorded her 900th career kill, finishing the match with 915 over her WSU career. Junior libero Alexis Dirige also moved up the Cougar record books as she moved into a tie for 10th all-time in digs with 1,070 career digs.

The win gave the Cougars 28 opening-match wins in their last 32 years. The Cougars are currently playing North Carolina State University.