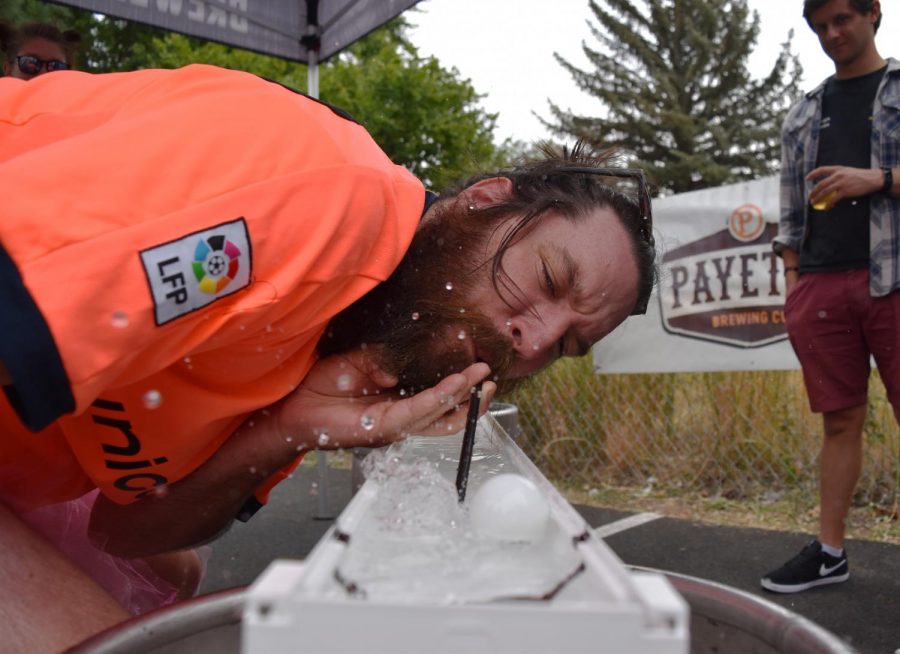 Kyle Howerton, a representative of the Neon Ninja team, shows off his straw-blowing skills at the timed Ping Pong Race during the third annual Beer Olympics at Birch & Barley on Saturday afternoon.

With music blaring, 12 brews on tap and over a dozen teams competing, Birch & Barley put on what many would consider its best event of the year Saturday during the third annual Beer Olympics and Beer Brigade Appreciation Party.

Josh Clark, the owner and founder of Birch & Barley, needed to start planning six months in advance for the event.

“If I stumbled on something like this, I’d be in it in a heartbeat,” Clark said. “With our events, it isn’t just a tap takeover. We think of some unique idea for people to have an experience while they’re here.”

The Beer Olympics began as an appreciation party for the participants of Birch & Barley’s membership program named “The Beer Brigade” nearly five years ago.

Josh Clark decided to host the first Beer Olympics during the third Beer Brigade Appreciation Party and he said the response was so phenomenal that Clark had no choice but to make the Beer Olympics an annual tradition.

Birch & Barley’s manager Jill Bielenberg made a conscious effort to get people involved in the events and community while they enjoy the beer.

“We call it the Beer Olympics because of the good beer we bring in,” Bielenberg said. “None of the games are beer-drinking focused so the crowd we get is just fun. They have an appreciation for microbrews and socializing, as opposed to just drinking.”

As different costumed teams showed up in the parking lot, the crowd engaged immediately in the events. From the superhero-clad “Incredibrews” to the business casual members of “The Aggressively Average Dads,” everyone could enjoy the company they were surrounded by as much as the beer on tap.

Amy Brown, a WSU graduate student and first time attendee of the event, attended with her work friends as a member of the “Designated Drinkers” and hoped to spend her Saturday relaxing.

“This is just to get to know people and have fun,” Brown said.

Clark said Birch & Barley chooses different breweries based off what their Beer Brigade members respond to each year. Many breweries came to show off the best alcohol they had to offer, but the crowd responded well to Tieton Bourbon Peach Cider.

As the evening continued, each team made their rounds to participate in the events. Teams needed to practice their technique in putt-putt skee-ball, the pool noodle throw and the cup stacking events, but they seemed to have the most difficulty with the swinging beer darts.

In this event, a can of sparkling water was suspended from a string and swung in circles. To win, a participant had to throw a dart hard enough to hit and then break the casing of the can, causing the drink to spill everywhere.

Only a handful of people managed to succeed in bursting open the swinging can, but after they did, the winners received rapturous applause from their teams.

Despite the hectic nature of the Beer Olympics, the staff of Birch & Barley were more than content. Head Chef Michael Jones has been working at the company since they began six years ago and has served food for each Beer Olympics.

“It adds extra stress for sure, but it gets you out of the daily grind,” he said as he set up his taco bar.

Chef Jones said events like these are part of the reason why Birch & Barley is still thriving today, bringing their loyal customers an experience they won’t find anywhere else in Pullman.

Music provided by DJ Moonraye, who had never performed in the area until last Saturday, added to the atmosphere. Moonraye brought the colorfully dressed people to their feet to dance along to his energetic tunes.

“Microbrew ale culture has become so awesome. It’s a great place where people can be themselves,” Moonraye said with a smile on his face.

The Beer Olympics ended as the crowd of people shuffled out of the once-unknown restaurant and bar off of Bishop Boulevard.

“I wanted to be more about relationships than food. We told our employees that we wanted them to know all of the guests, have them shake their hands and pick up conversations where they left off next time they come,” Clark said, reminiscing about his time at Birch and Barley. “We’ve put all these years focusing on relationships in the community so when we do something they pour it back into us.”