Volleyball walks away from weekend undefeated 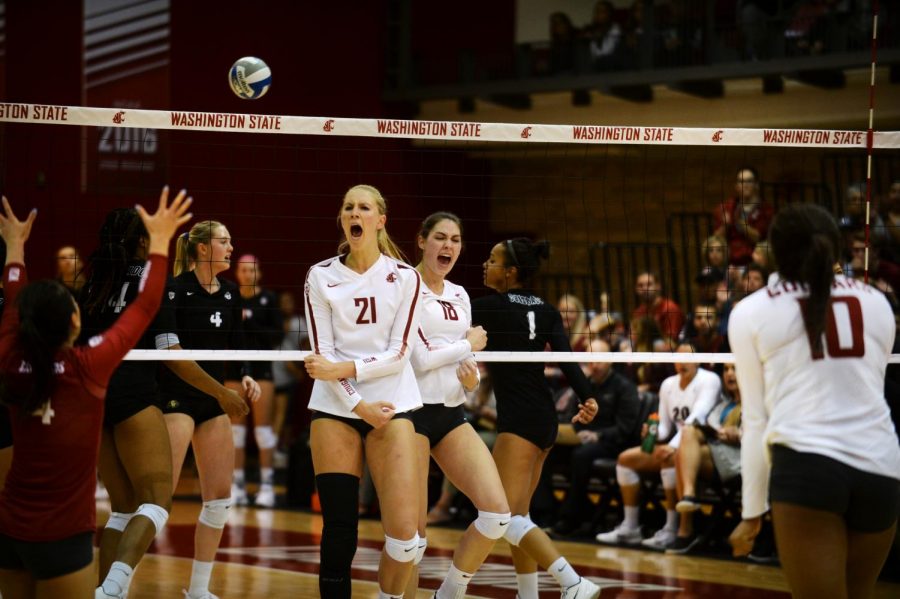 WSU then-senior opposite Casey Schoenlein, left, and then-junior middle blocker Ella Lajos celebrate another point with teammates in the match against Colorado on Oct. 6, 2017 in Bohler Gym.

Long runs of scoring and shutting down the opponent was the theme of the day for the Cougars  (2-0) as they continuously blanked the Wolfpack (1-1) to gain big leads.

The first set started closely, but senior outside hitter Taylor Mims brought the energy with three early kills and helped the Cougs build a lead. Up 15-13 coming out of a timeout, WSU used a 10-0 run to win the first set by a final score of 25-14.

Starting out back and forth, WSU used another 6-0 run to take a 12-8 lead in the second set. The Cougs kept up the success and had a second 6-0 run to pull away from the Wolfpack.

Mims and senior outside hitter McKenna Woodford combined for 10 of the 14 kills for WSU in the second set.

After winning the second set by a score of 25-17, the Cougars were looking to start the season with two straight three-set sweeps. NC State wouldn’t make it easy for WSU, as the third set was yet another close affair.

The difference was that the Cougars couldn’t put together a run as they had in the first two sets. The Wolfpack took a three-point lead late to go up 21-18. Avoiding a push from WSU, the Wolfpack finished out the third set, winning by a score of 25-22.

WSU quickly returned to form in the third set as the team started the fourth set out with a 5-3 lead. The Cougs continued as they then went on a 9-0 run to pull away from the Wolfpack.

WSU won the fourth and final set by a final score of 25-8, completing the nearly-perfect weekend and winning both matches it played.

Woodford came away with player of the match honors as she tied for the match high with 15 kills. Mims, Woodford and junior libero Alexis Dirige won all-tournament honors and Mims also earned the tournament MVP award.

After going 2-0 on its first road trip of the year, WSU will look to keep the winning streak going as it heads to Cedar Falls, Iowa, to face University of Northern Iowa 4 p.m. Friday at the McLeod Center.