Learning another language has networking, cultural benefits all students should embrace 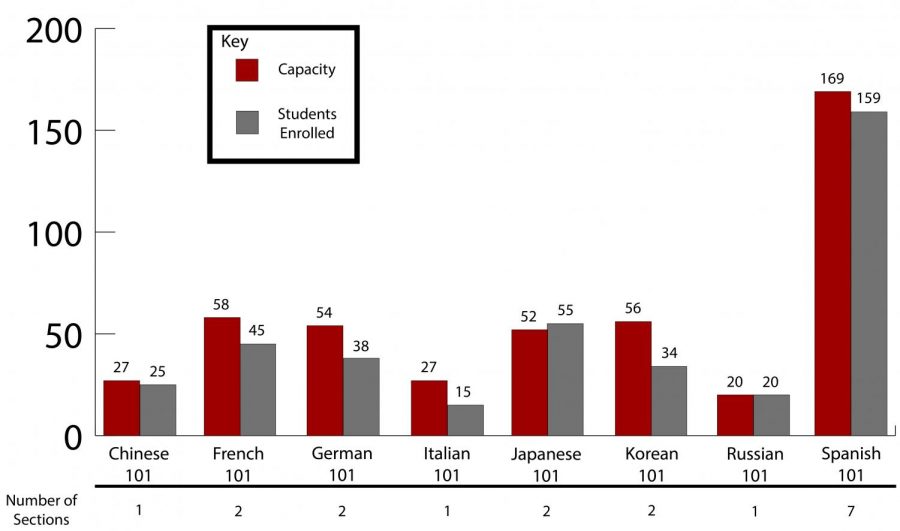 Enrollment rates and class capacities in all foreign language courses, except for Spanish, are very low compared to other courses at WSU. Requiring a foreign language would ensure all students can benefit from them.

As a freshman entering college, I was excited for the opportunity to take new and interesting classes that were not available to me in high school.

Even though I took four years of Spanish and received credit through a college-in-the-high-school program, I decided during orientation to enroll in Italian 101. I loved taking Spanish, but I’ve been interested in the Italian language and culture since childhood, and I knew taking it at WSU would be a valuable and enriching experience.

On my first day, I found that there were a mere 15 students in my Italian class, making it significantly smaller than my Honors College classes, which are supposed to be some of the smallest ones on campus.

It’s shocking that at a school with over 25,000 undergraduate students, only 15 would enroll in any given class. As it turns out, Italian is not the only foreign language class at WSU that faces the problem of under-enrollment.

WSU offers eight foreign languages: Chinese, French, German, Italian, Japanese, Korean, Russian and Spanish. Spanish is the only one of these eight that offers more than two sections of the first-semester class, according to WSU’s schedule of classes.

There are 159 students enrolled across the seven sections of Spanish 101, making it the most popular intro-level language class on campus. Furthermore, of the eight languages offered, only Russian and Japanese are filled to capacity. All other 101 level classes are not as full as they can be – or rather, should be.

Looking at data for just 101-level classes shows there are shockingly few students enrolled in foreign languages. Given that speaking another language is a valuable 21st-century job skill, there should be many more students in language classes.

Learning a new language can make it possible to work or study overseas, learn more while travelling and stand out to employers. The WSU Health Professions Student Center recommends to all incoming pre-health students that they gain experience in “cultural knowledge” which can begin by taking a foreign language class.

“Each language has a realm that goes all over the world,” said Maria Previto, an Italian and Spanish instructor.

Previto firmly believes that students planning to study abroad should spend at least one year learning the language of the country to which they will be traveling.

“[In doing so], you will feel comfortable if you are alone,” she said.

“[These languages] are greatly beneficial to my future career,” Rodriguez said.

Some WSU students are likely to use a foreign language in a career related to their major. Others have signed up based on requirements from various colleges, such as the Honors College mandate that requires students to take four semesters of a language.

Are other students not taking languages simply because it isn’t required by the college as a whole?

Considering how valuable it can be to know a language other than English, it seems other colleges should require students to meet a foreign language standard in order to graduate, but this isn’t the case.