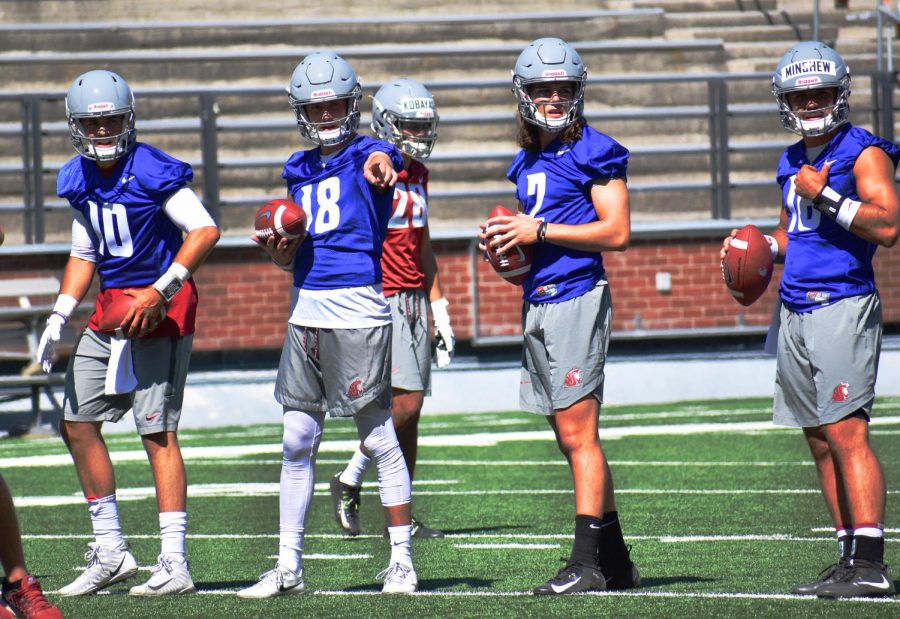 Without even taking a snap, the Cougars already lead the nation in one department: the 19 “or’s” that separate players in the newly-released 2018 depth chart.

It doesn’t come as a surprise to see the word “or” between players. WSU Head Coach Mike Leach has used this particular technique in the past. But perhaps the unprecedented amount of uncertainty is warranted in a season that has seen the most turnover since Leach’s first season at WSU.

The most notable of the “or’s” lies at the quarterback position where Leach elected to name all four of his quarterbacks the starter. But rest assured, with graduate transfer Gardner Minshew II at the top of the list we can expect to see him on the field for the first snap.

Here are some notable “or’s,” or lack thereof, in WSU’s initial depth chart:

No “or” for junior wide receiver Dezmon Patmon

I don’t quite know what to make of it, considering junior Calvin Jackson Jr. is listed below Patmon but still has an “or” next to his name. Maybe I am looking into it too much, but the lack of an “or” next to Patmon’s name took me by surprise.

While redshirt junior Easop Winston Jr. has earned every right to be listed as the starter after making a name for himself in spring camp and continuing his stellar play in the fall, Patmon is the biggest red zone target on the roster, and it is hard to believe with 19 “or’s” on the depth chart that Patmon didn’t earn one of them.

I wouldn’t have been surprised by this if Silvels was named the starter at rush toward the end of spring. But for most of fall camp Silvels had been taking reps at the inside linebacker positions, and playing well at that.

Maybe Silvels played so well that Claeys and Leach agreed he needed to be on the field. Or maybe they were not as impressed with redshirt freshman rush linebacker Willie Taylor III as I had anticipated, who also has an “or” next to his name.

But the sudden change of position is an interesting move, and we won’t truly know what sparked the decision until we see Silvels and Taylor play this week.

No “or” for freshman wide receiver Rodrick Fisher

This could be for two reasons. First, sophomore receiver Tay Martin is the best receiver on WSU’s roster and deserves to be on the field for every offensive snap. It could also be because 19-year-old Fisher was arrested on a “baby” DUI charge earlier this week.

While I think both are warranting reasons to define Martin as the starter, I suspect Fisher didn’t get an “or” next to his name for the latter reason.

Fisher has impressed through spring and fall camp and was poised to contribute for the Cougars in 2018. With the team announcing it would handle Fisher’s punishment internally, it remains to be seen what his role will look like going forward.

Still too close to call in the kicking game

While I typically find the excessive “or’s” to just be misleading, I think they accurately sum up the kicking battle for WSU. I honestly don’t know who is more deserving to be the starter and I don’t think the Cougars know either.

I wouldn’t be surprised if they go with the names listed on top until they miss or produce a poor punt. I would say the kicking game will be decided the same way as the running backs, which is until the team has the empirical data to support one kicker or the other.