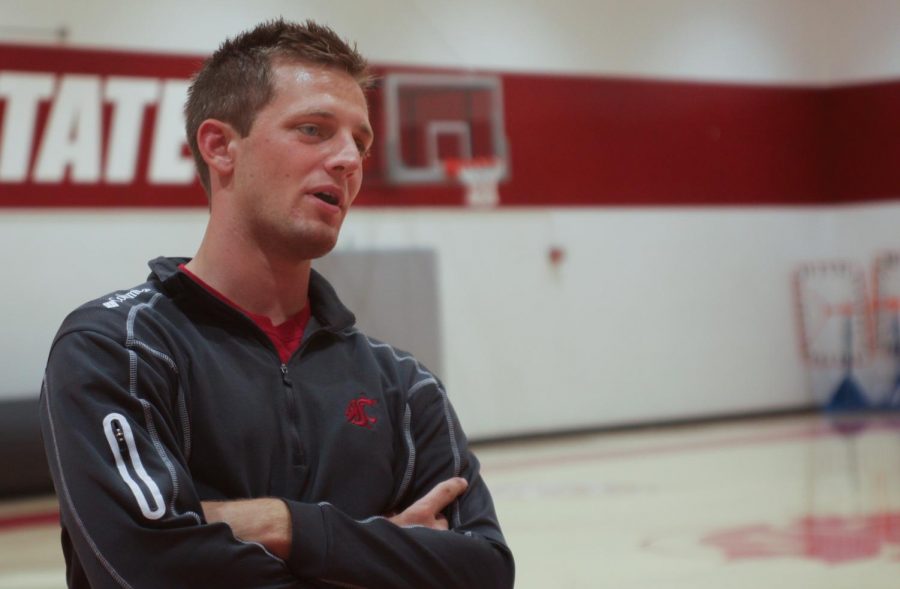 Wrestling Club President Randall Chipman speaks about the team goals he has set for this season, including community involvement, Wednesday in the Physical Education Building.

Finishing a season one victory short of becoming an All-American would be gut-wrenching. However, Randall Chipman, WSU wrestling club president, looks to use that as fuel to help carry his club to success.

The wrestling program at WSU was once an NCAA Division I program until men’s wrestling was cut due to Title IX. However, in 2012, a club team was formed.

Since then, the program has made monumental strides to become a powerhouse in the National Collegiate Wrestling Association, or NCWA, Northwest Division. Last season the club finished second in the conference and 14th in the nation out of 124 teams.

The team is led by senior and club president Randall Chipman. Chipman, who wrestles in the 149 pound weight class, has high hopes for Cougar wrestling this season. He hopes to bring the Northwest Division title back to Pullman, but he knows this will not be an easy task.

“Every year it comes down to us and Grays Harbor College,” Chipman said. “Last year we lost to them by 16 points, but with new talent here and our ability to get things done, I think we can beat them.”

Chipman said he also expects his teammates, senior Jake Lindell and sophomore David Woo, to lead WSU to victory. Lindell, who wrestles in the 184 pound weight class, and Woo, who competes in the 125 pound weight class, both finished top five in the Northwest Conference Championships last season.

The team starts the season off with the Crimson vs. Gray exhibition on Oct. 26 at the Student Recreation Center with all fans welcome to attend.

The club has set its sights on the prestigious National Duals Tournament in Las Vegas and the NCWA National Championship in Allen, Texas, for this season.

Beyond their championship goals, Chipman wants his team to be more active in the community.

“Now that we have proven we can win, I want our team to be more helpful in the community,” Chipman said.

As a first step toward reaching this goal, the team will hold a youth wrestling clinic on Oct. 6.

Despite the strenuous task of balancing schoolwork, wrestling and helping others, Chipman said he wants to ensure he and his peers are as good on the wrestling mat as they are off the mat.

“I mean, you are a student first,” Chipman said. “Then you are a wrestler.”

Most importantly, Chipman wants his teammates to take away at least one thing from their time in the club.

“I want to lead this team to help develop more leaders … That’s why we go to school,” Chipman said. “To learn about yourself and other things that pertain to what you want to do.”

The WSU Wrestling Club starts preseason practice Sept. 4. They will practice Tuesday to Thursday from 5-7 p.m. in PEB Room 144. Season practices start Oct. 1 and those are Monday through Friday at the same time and place.