Athlete of the Week: Taylor Mims

Mims had impressive performance in series against No. 17 UNI 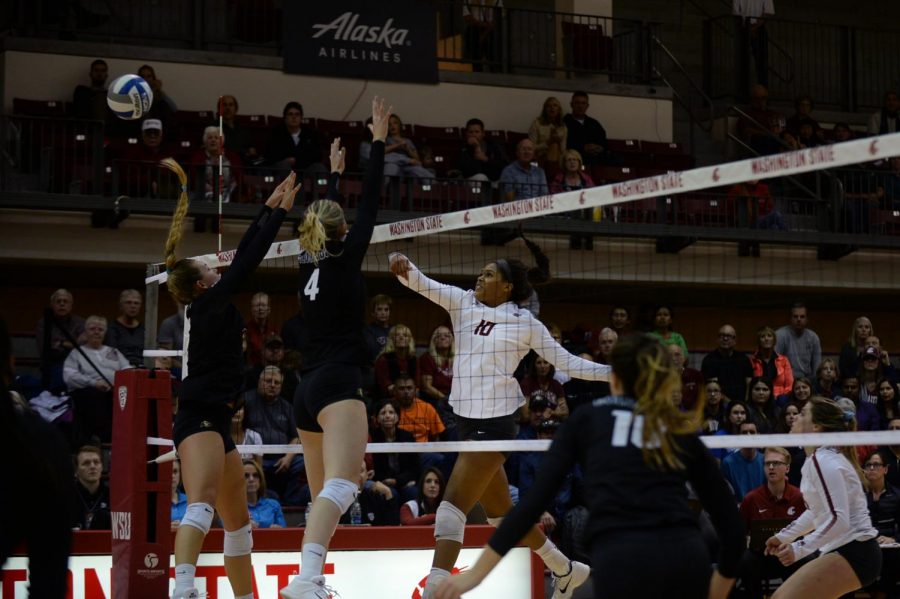 Then-junior outside hitter Taylor Mims hits the ball past Colorado blockers on Oct. 6, 2017 in Bohler Gym.

The Evergreen Athlete of the Week for Aug. 26 – Sept. 1 is Cougar volleyball’s senior outside hitter Taylor Mims.

Mims has played a crucial role in the success of the undefeated No. 23 WSU (4-o) volleyball team so far this season. Each match this season, Mims has led the team in kills and started many game-changing rallies, leading her team to victories.

WSU, then unranked, upset No. 17 Northern Iowa 3-1 on the road in Cedar Falls, Iowa, on Friday. In the first set, UNI was trailing by only one point late in the frame when Mims started a rally with her fifth kill of the set, putting WSU up one set in the match.

Mims continued to bring her explosive energy to the match Saturday resulting in another 3-1 victory over Northern Iowa. In the final two sets of the match, Mims laid down 19 kills and finished with 26 in the match, tying her career high.

Mims and the Cougars will be back in action at noon Friday when they take on McNesse State in Bohler Gym during the Cougar Challenge Tournament.