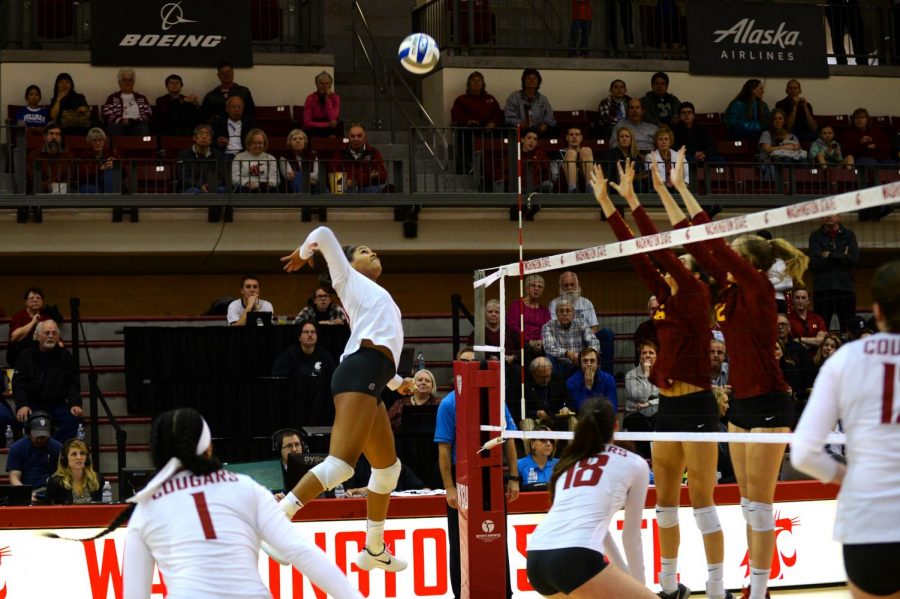 Then-junior outside hitter Taylor Mims attempts to spike the ball against the University of Southern California defense Oct. 29, 2017 in Bohler Gymnasium. WSU will play in Pullman for the first time this year Friday.

Beating a high ranked team on the road is no easy task, but WSU volleyball accomplished that feat twice last weekend.

Those two wins came against the No. 17 University of Northern Iowa (2-4) and notched the Cougars (4-0) a spot as one of the top-25 teams in the country. Now ranked No. 23, WSU wants to gather consistency as it looks toward the Cougar Challenge Tournament this weekend.

Head Coach Jen Greeny said she is proud of the team in general for going on the road and earning those two big wins against a ranked opponent.

“I was really impressed with our blocking Friday night especially,” Greeny said, “It was a big improvement from the first weekend.”

As impressive as the past weekend was, the team is always looking at it they can get better and improve upon mistakes. Greeny said that despite the 4-0 start, she still sees room for improvement and this weekend is a big chance to make steps towards those improvements.

Getting more people involved in the offense, being more efficient as a team and consistency are some ways for the team to improve, she said.

“No team in the country is consistent right now,” Greeny said, “I would be worried if we were, but trying to work on consistency through every aspect of the game.”

This weekend the Cougars will face three non-conference teams. McNeese State, Illinois State University and Stony Brook University will all travel to Pullman for the tournament.

Although none of these three teams are ranked, WSU will have new challenges it hasn’t faced yet this season. Playing three matches in 24 hours will be hard for the team in terms of recovery but is good adversity for them to face upcoming league play.

Greeny said it will be a tough weekend physically, but in terms of preparation for the three matches it is the same as it would be any other week.

The beginning of the year has already been full of travel for the Cougars, so Greeny said they are excited to be back home and have a break from the road trips.

“We love Bohler Gym and the atmosphere our fans bring,” Greeny said.

She said she is excited for the big weekend with soccer and football also having home games, and hopes big crowds come to support all sports this weekend.