Finding a way out 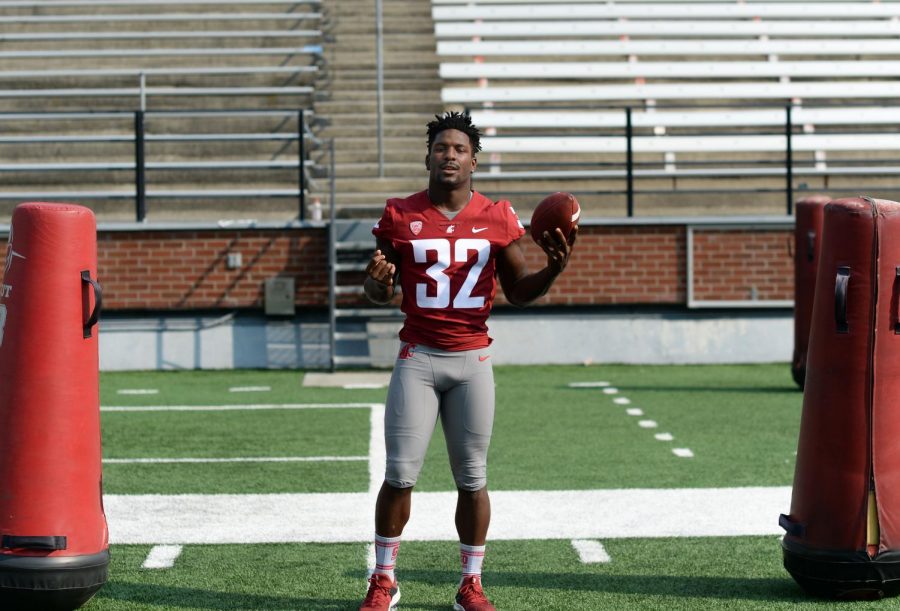 Redshirt junior running back James Williams II slept in motel rooms, churches and the back of a car for nearly a year while his family made the transition to living in California. “What we had was nothing, but at the same time we made the most of it,” he said.

A bed in a Motel 6, the backseat of a Chevrolet TrailBlazer and the floor of a church: all places James Williams II had to sleep and call home for about a year as his family made the transition from Toledo, Ohio, to Burbank, California.

It wasn’t easy, but the redshirt junior running back got through it and will never forget the life lessons he gained from that experience.

“What we had was nothing,” Williams II said, “but at the same time we made the most of it every day, and then was when I started to realize the potential with football.”

He saw a way out. A chance to break down barriers, help his family and play the game he learned to love while chasing his cousins on the streets of Toledo.

It all started at the end of his seventh-grade year when Williams II’s father, James Williams I, decided to spend just about everything he had to move his family to California, to give his children a chance at a better life and education.

Prior to moving, Williams II played football in Ohio and spent the majority of his time on defense, dabbling with defensive end and linebacker despite scoring a touchdown the first time he ever touched the ball as a running back.

As his family struggled to find a place to sleep, his dad stumbled across a football coach for a local Pop Warner team. The coach gave Williams II a chance to play and after seeing him run sprints for the first time, he decided Williams II was made to be a running back.

Williams II took full advantage of this opportunity, getting up early every morning to practice football while he and his brother, sister, mom and dad lived in a TrailBlazer for the entire summer before he started eighth grade.

His dad said he had a plan for housing when he first moved his family to California but things fell through.

“Everything that could go wrong, did go wrong when we got here,” Williams I said.

When Williams II began eighth grade, he and his family got into Family Promise, a program designed to help homeless and low-income families. Williams II said this program allowed his family to stay in a church for about a week before having to move again to find another church to sleep in.

While they bounced around trying to find a place to sleep, his dad was using any money he had to afford a Motel 6. The Williams family would spend weeks at a time in these motels, and once they couldn’t afford it anymore they would all cram into the TrailBlazer or find a local church to stay in.

It wasn’t until Williams II completed his first year of school in California that his family was able to move into an apartment.

“It was a crazy little patch,” Williams II said. “But it got me and my family super close and made me realize how to value a dollar.”

His father shared a similar sentiment.

“It didn’t destroy us, it just made us stronger,” Williams I said.

While Williams II was playing football in eighth grade, Richard Broussard stumbled across him and was immediately impressed.

“He was a stud when I first saw him,” Broussard said.

Knowing the talent Williams II possessed, Broussard, an assistant coach at Burbank High School at that time, was looking forward to potentially working with him as he wrapped up junior high and headed to high school.

But Broussard was worried that a local private school might try to snatch up Williams II and prevent him from ever stepping on the field for Burbank.

Williams II said people around him were telling him to pursue the private school route so he could go to University of Notre Dame, but he decided to go somewhere he would stand out, and that was Burbank.

In his first season Williams II racked up over 2,000 rushing yards playing for the Burbank High School freshman team. Williams II sat down with Broussard immediately following that season and told the coach he wanted to start at running back for the varsity team his sophomore year.

So every day Williams II would sit with Broussard at lunch to go over plays to make sure nothing prevented him from starting his sophomore season. Broussard said he was impressed with Williams II’s dedication.

“You’ll never say no to a kid that wants to learn and put in the work,” he said, “but when he’s a dude like James is, it’s great.”

After months of preparation over the summer, the beginning of the football season was nearing, and Williams II knew he would have to beat out a senior running back to earn the starting job. Luckily for him, the senior got involved in a fight before the team’s first game, giving Williams II the chance to start and prove himself.

Williams II tallied 189 rushing yards and two touchdowns in that game and held on to the starting job for the rest of his high school career.

Broussard said he and the other coaches knew Williams II was going to be the starter the moment his freshman season ended.

Williams II continued to shine and by the end of his junior season, playing for a Division 1 school became a reality when he received an offer from University of Arizona.

“My heart dropped,” Williams II said, recalling how it felt when he received the phone call.

A week later Williams II received an offer from University of California, Berkeley, and a handful of other schools before WSU finally became interested.

On the other end of the line of the initial phone call to Williams II was former WSU running backs coach Jim Mastro. Williams II said the Cougars stood out from the other schools because they were talking to him every other day, and whenever they came down to California for recruiting they always stopped by to see him.

This caused Williams II to commit early to WSU before the start of his senior season — a season Williams II wishes he could have back.

“I’m not going somewhere where I don’t feel wanted, and I felt wanted here,” he said.

Broussard said the injury didn’t slow Williams II down either. Instead, it made him hungrier.

Broussard recalled watching Williams II running sprints and drills while he was recovering from the injury with a handful of games left in his senior season and him wanting to get back on the field.

Williams II also had to deal with issues in the classroom during his time in California, so much so that he was told it was academically impossible for him to go straight from Burbank to a Division 1 school.

The difficulties stemmed from his time in Ohio where Williams II said the school district was nearly nonexistent. He said students in class would mess around and ignore the teacher and the instructor would become so fed up that they would just walk out of the classroom and disappear for weeks at a time.

Those poor grades followed Williams II to California and he was placed in Special Ed for slow learners throughout junior high and most of high school.

But Williams II said he did whatever he could to make it to WSU, including getting A’s in all seven of the classes he took his senior year.

“People don’t recognize they’re blessed with talents all the time and that they can be taken away at any time,” he said. “But James knew football was his ticket. It’s the ticket to change the dynamic of his family forever.”

After he is done smashing the record books at WSU, Williams II hopes to play in the NFL and continue to prove people who doubt him wrong.

“If somebody tells me I can’t do something,” he said, “I’m going to make sure I work my way up to where I need to be.”