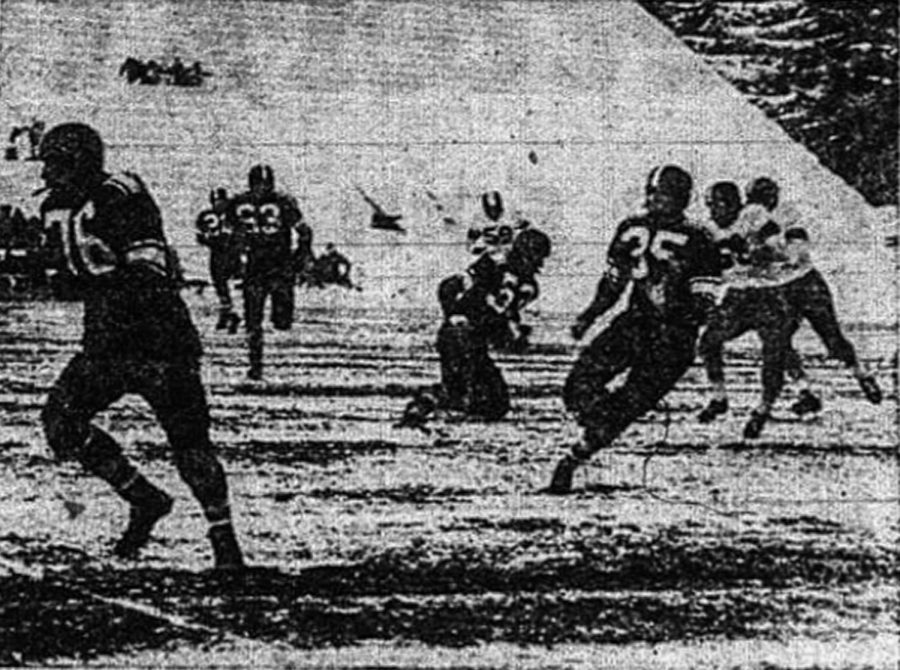 Regardless of how WSU fares in its home opener against San Jose State University, it will be nearly impossible to top the historic matchup 63 years ago.

The game took place on Rogers Field just adjacent to where Martin Stadium currently stands. The now-practice fields of WSU football hosted a game in blistering cold conditions that would end in a 13-13 tie and would forever be remembered as the “Refrigerator Bowl.”

The game was played in the winter of 1955, when Winston cigarettes advertised in The Daily Evergreen and WSU was Washington State College.

Just a day before the Cougars’ game, Head Coach Ray Hobbs and his Pullman Greyhounds football team had captured a massive win against crosstown rival Moscow High School for their 20th-consecutive win in the span of two seasons.

That game was played in sub-zero temperatures with a wind chill that brought it even below that. It was an icy precursor of what was to come for the Cougars on Nov. 12, 1955.

The Cougars were hosting the 5-2 San Jose State Spartans and were largely considered underdogs on their home field. It was in all respects a miserable season for the Cougs. They entered the game 1-6-1, with four shutout losses to their name already. Their only positive result of the season came against the University of Idaho in a 9-0 conference road win.

“It was one of those terribly, terribly cold winter days,” Richard Fry, the former WSU sports information director from 1957-70, said. “I think it was November 12, was it?”

On that memorable day — so memorable Fry still remembers the date despite 63 years having passed — he was with the WSU News Bureau, positioned in the press box to witness the game that was played on a frozen tundra of a field.

He remembers how the Cougars placed steel barrels on the sidelines and started fires in them to try and keep the players warm. Throughout the game both teams tallied 13 fumbles — five from the Cougs and eight from the Spartans — because of the bone-chilling temperatures.

“One incident I remember well, Herb Ashlock was the sports editor of the Spokane [Daily] Chronicle, and I had poured some coffee for Herb and he made the mistake of taking his right glove off — and the bench those days were steel instead of wood — and when he put his hand down to get that coffee, it just froze right there to the steel,” Fry recalled. “So he took the coffee cup and poured a little hot coffee on his hand to unfreeze him.”

Writers who couldn’t handle the freezing temperatures left the press box to watch the game from the senior ballroom, which still overlooked Rogers Field.

Among the writers who were covering the game was The Daily Evergreen’s then-sports editor Tom Gullikson.

“The older members of the press box crew could remember no game ever played on the Cougar home field under such adverse weather conditions as near-zero thermometer readings and the chilling winds,” Gullikson wrote in the Nov. 15, 1955 edition of The Daily Evergreen.

He added: “According to WSC’s baseball coach Buck Bailey the Gonzaga-WSC grid-tussle of 1926 comes the closest to duplicating the conditions of last Saturday.”

Gullikson’s portrayal was not hyperbole. Nov. 12, 1955 was the coldest Nov. 12 in the entire history of the weather bureau.

It was so cold that only 1,600 fans were in attendance at Rogers Field, which sat 20,000. Only one Cougar fan who had reserved a ticket at the box office followed up to purchase the ticket and go to the game. That fan’s name was Charles Moore and he was quickly sought after by then-ticket manager Robert Smawley.

In the Nov. 15, 1955 edition of The Daily Evergreen, Gullikson’s headline read “The Search Is On.”

“Bob Smawley is still searching for the purchaser of the one reserved seat ticket sold by his ticket sellers last Saturday,” Gullikson wrote. “This person if found will be refunded the amount of money he paid for the ticket.”

“If a person buys a ticket in advance he wants a seat at the game,” Smawley said in Gullikson’s reporting. “But if a person braves a storm and buys his ticket amidst a falling snow, he really wants to see the game.”

Smawley eventually found Moore. He was honored and his money was refunded at a Cougar basketball game against then-defending Pacific Coast Conference champions Oregon State Beavers.

This weekend when the Cougars take on the Spartans, it isn’t set to produce headlines quite like the matchup did in 1955. But the Refrigerator Bowl is a small part of Cougar football that deserves recognition as one of the more unique games to ever be played in WSU history.