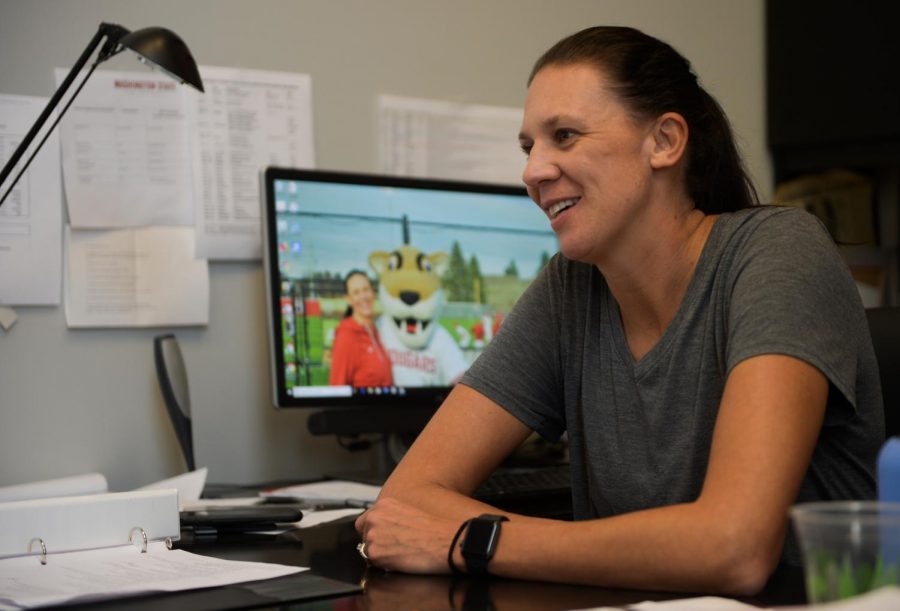 Jen Greeny, head coach of WSU volleyball, talks about coming into the program and becoming coach at the end of the Pac-10 and how the program has changed since then Wednesday in the Bohler Athletic Complex.

From a recruitment host to being in each other’s weddings, WSU women’s volleyball Head Coach Jen Greeny and Assistant Coach Shannon Hunt have stronger relationship than most coaches.

Hunt is a year older and hosted Greeny on her recruitment trip to WSU.

Greeny said there were a lot of factors that brought her here. The team was winning, which always helps bring players in. But she also loved the coaches and atmosphere, not only of the campus, but of how WSU supported female athletes.

Maybe more than all of that, meeting Hunt helped bring Greeny to the Palouse as a member of the volleyball team.

“We connected right away, and we ended up being roommates,” Greeny said.

She said she got a different feeling from WSU than any other place she visited.

In their time here together as players, Greeny and Hunt were co-captains who made trips to the Elite Eight and Sweet 16.

Not only did they share a home and have all volleyball activities together, but they were both elementary education majors.

The year after Greeny got done playing she became assistant coach at WSU. She then left and coached at Pullman High School and at Lewis-Clark State College. After that, Greeny returned to WSU as the head coach.

“As soon as I got the job here I called [Hunt] and wanted her to be on the staff,” Greeny said.

Hunt accepted and was a volunteer assistant in her first year before becoming the full-time assistant coach the next year.

Greeny said having that background and trust in each other is important so they know what the other person is going to do.

She said sometimes it can be hard for their relationship not to be strained in the position they are in, but they both love what they are doing and complement each other well, so it works out.

“I think it’s a little spooky sometimes actually because we dress the same and know basically everything about each other,” Greeny said.

Having been players here at WSU, Greeny said she and Hunt gain an advantage in terms of coaching the team now.

She said the success they had as players gives them more credibility. They went through everything the players go through now in terms of being a student-athlete and dealing with school, summer practices and everything else.

“I think it is really beneficial especially because we did it here at the same school they are at,” Greeny said.

When the two took over coaching, the program had a record of 0-18 with a team GPA of just 1.96. Greeny said players had been kicked off and arrested.

She said it was probably as bad as it could get and it was something none of the alumni, especially Greeny and Hunt, wanted to see.

“To work so hard to get it back to where we are now, making it to the tournament, has made all of the heavy lifting worth it,” Greeny said.

Making the tournament in back-to-back years and getting the buy-in of the players means a lot to the two coaches.

From a recruitment visit, to playing together, being in each other’s weddings and now coaching together, Greeny and Hunt have been through a lot together, and their friendship continues to strengthen the program.