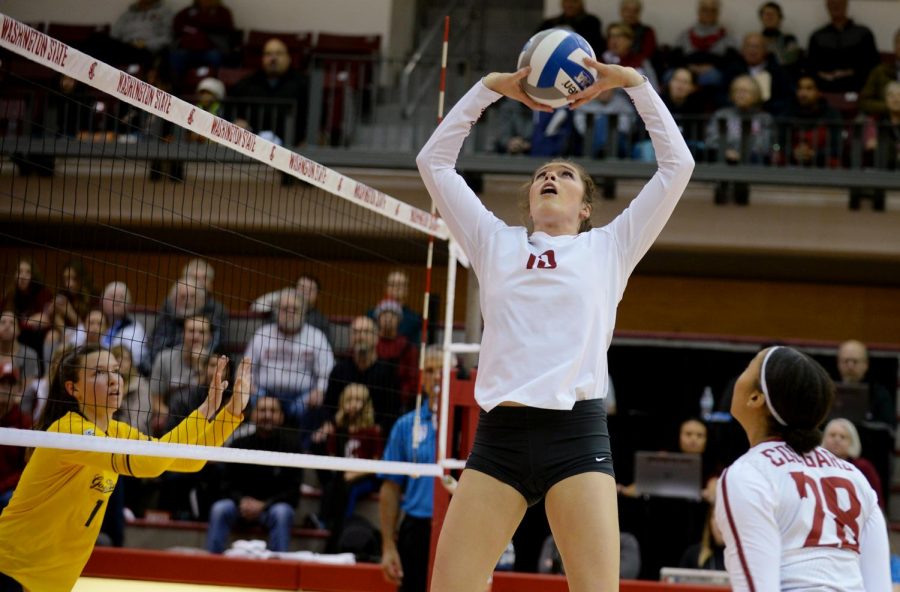 No. 23 WSU volleyball opened the Cougar Challenge with a clean sweep of McNeese State University on Friday in Bohler Gym.

The Cougars came out slow in the first couple of sets due to an early start time and a lack of communication by senior outside-hitter Taylor Mims and senior middle blocker Ella Lajos.

Mims said that it was different having preparation early in the morning and breakfast before the match. This was one of the factors that led to the slow start, but she said communication in the match was a bigger problem.

“Communication on the court was lacking for sure, we stepped up in the last match, but it should have been better,” Mims said.

Lajos said their coaches were also preaching communication in their timeouts and to pick it up. She said that although they won, it was way to quiet and they need to step that up in upcoming matches.

The first two sets, although not played as well as they would’ve liked, were won by the Cougars both by the score of 25-17.

After taking care of business in the first two sets, WSU was looking for its second sweep of the season. The Cougs came out much stronger in the third set and had their foot on the gas the entire set.

Senior outside-hitter McKenna Woodford had one of her nine kills in the third set to give the Cougars a 21-10 lead that they never looked back from. They won the third set by a score of 25-15.

Head Coach Jen Greeny said she was surprised that her team came out flat and didn’t set the tone the way she thought they would. She said that the level of communication and energy needs to be better the rest of the weekend.

“We definitely need to clean up our setting and blocking and shift it into another gear,” Greeny said.

In the second match of the day, WSU grabbed its sixth straight win to start the year as they beat Illinois State University 3-1.

A back and forth first set was taken by the Cougars by a final score of 25-19. WSU faced some adversity early when a challenge by Greeny didn’t go the team’s way.

Some timely blocks and big kills helped the Cougars end the Redbirds rally and start one of their own. Five kills apiece in the set from Wofford and Lajos allowed the Cougs to close the set on a high note.

Lajos wasn’t done there as she got back-to-back kills to force an early timeout from Illinois State who was trailing the Cougars 12-6. After the timeout, WSU took over the set with junior libero Alexis Dirige serving.

“If I serve tough it allows our blocks to get really set up and gets the other team out of rhythm,” Dirige said.

Looking for their second sweep in as many matches on Friday, the Cougars came out of the locker room a little bit lost in the third set. Illinois State got out to a 5-0 start forcing Greeny to call a timeout.

Three more unanswered points were scored by the Redbirds before a service error ended their run. WSU was looking at a big deficit early down 8-1 but chipped away and only trailed 16-12.

Another unsuccessful challenge by the Cougars ended the run they were on, but they started another and got within one point on another Lajos kill.

However, the eight-point deficit proved to be too much for WSU as the comeback fell just short. ISU closed the third set out and won 25-21. Redshirt junior middle blocker Jocelyn Urias said they expected the third set to be tough because of how close the first two were.

“We knew they were going to come back strong after we won the first two, but we just had to focus on the little details heading into the fourth set,” Urias said.

In the fourth set, WSU did just that and got an early 6-2 lead forcing ISU to call a timeout. Continuing the strong play, the Cougs forced another timeout, this time leading 14-7.

Urias ended the night with her career-high 18th kill, finishing off the Redbirds by a final of 25-21. She said that the Cougars brought much better energy to tonight’s match and she fed off of that.

“The connection with the setter was really good tonight and that is important to have,” Urias said.

The Cougars will look to bring their record to 7-0 in their next match Saturday, but the Cougar Challenge brings a new encounter for them.

Playing three matches in 24 hours is not something volleyball teams typically do. Dirige said they will try to get to sleep as soon as possible and start to prepare for their next opponent early.

“Get any treatment you need and get your mind right in the morning,” Dirige said.

WSU’s third and final match of the Cougar Challenge is set for noon Saturday against Stony Brook University in Bohler Gym.