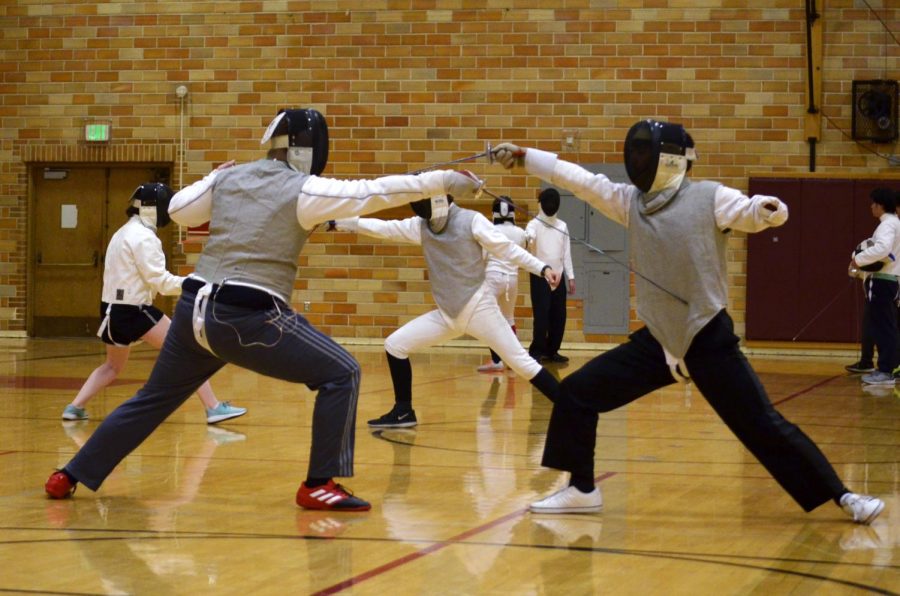 Athletes from the WSU fencing club were clashing swords as they practiced in Smith Gym on Thursday night.

Fencing is an old practice with cultural references in “The Three Musketeers” and “The Parent Trap.” While it might be easy to describe fencing as sword fighting, fencing is more than just the combat people see on TV.

“It’s like chess on your feet with a sword,” said junior player coach Nick Thomas.

One of Thomas’ newest members is freshman Grace LaPierre. Fencing is new for her and she wants to be able to hold her own in a bout against someone else who is at her level. She said the people are fun and supportive and will assist when there is an issue.

“It might seem a little daunting,” LaPierre said. “I know I get kinda anxious with new things. [They] just want to help you learn and enjoy the sport.”

Returning from a year-long hiatus, sophomore Zach Mellin is a foil fencer and is getting back into the sport after taking a year to establish residency in Washington.

“After my first few practices I noticed, wow, I’m terrible at fencing,” Mellin said. “But it was so fun. So I decided, hey, I’m going to stick with it and see how I do by the end of the year.”

The team goes to tournaments that vary in skill level and oftentimes Mellin said he finds himself going up against more experienced fencers. But he enjoys competing against people he has never fenced before, he said, even though the odds are usually stacked against him. He said he uses these opportunities to pick apart his opponent’s knowledge after their bout.

Like LaPierre, Mellin also enjoys the people in the club and how helpful they are. Fencing involves technique but Mellin said it is easy to have fun with fencing.

“Fencing is a sport people will pick up in college and do the rest of their lives,” said volunteer coach Sarah Clemens, who has fenced for seven years.

Fencing is a technical sport, and fencers need to be both athletic and strategic in thinking. A fencer needs to have a plan and know how to quickly adjust to an opponent’s attack.

In lower levels of fencing, men and women will compete against each other.

Fencing has three different styles: foil, epee and sabre. Each style has its own weapon, different target areas and different ways to score. The fencing club currently practices the foil and epee styles.

In foil fencing, fencers wear a gray vest or “lame.” To score, fencers must make contact with the point of their foil with the lame. Thomas is a foil fencer.

Epee is the slowest of the three styles because it does not have the “right of way” rule. If both fencers make contact, both fencers will get a point regardless of who hit first.

“You need to make sure you can get the point without them being able to get a point as well,” senior Joshua Green said.

Green started out with foil and switched to epee because it was a better style for how he liked to fence.

Sabre fencing is the fastest of the three, and like foil it has the right of way rule. The club does not currently practice this style. The members are getting another player coach who is a sabre fencer, Thomas said.

The fencing club has about 15 members and is about 60 percent foil and 40 percent epee, Thomas said.