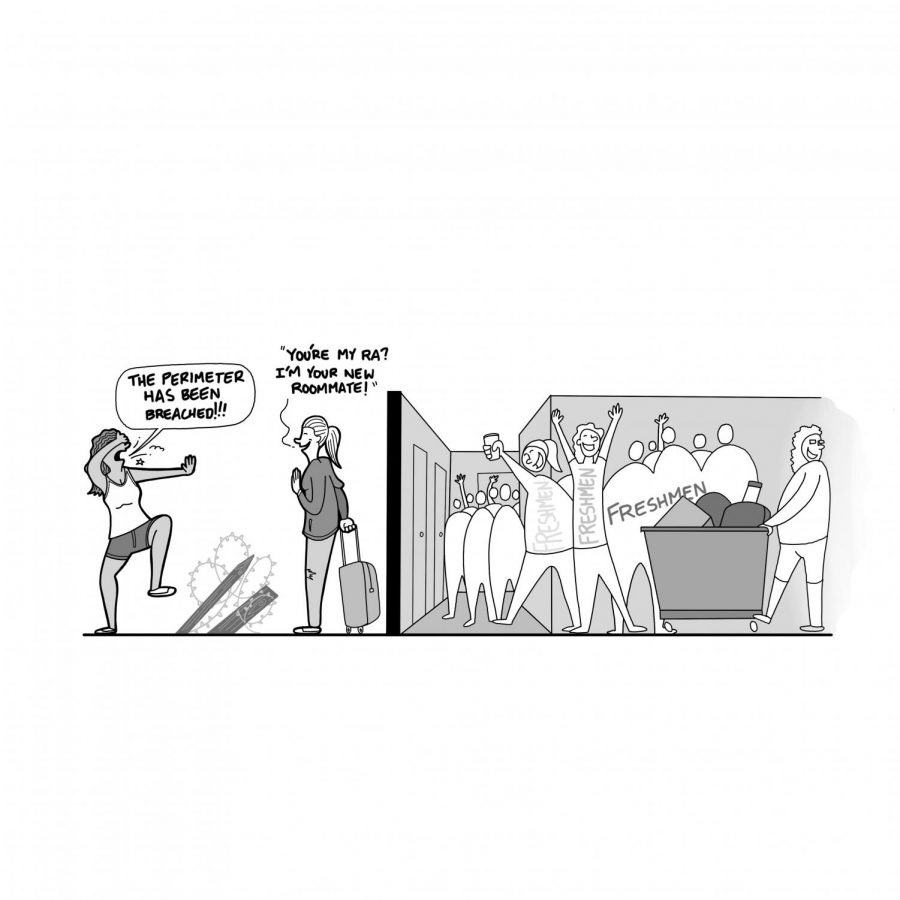 Terror strikes in the dorms as one RA recounts her experience with “The Horde” and a horrifying new roommate.

Piercing screams. That was the first thing Adrianna Grande, a Resident Adviser (RA) in Stephenson, recalled about the Horde.

“The noises were the worst part,” Grande said, her voice shaking. “The sound of crying, sighs and grunts filled the air as the Horde began to infect the building.”

The Horde that Grande was refer­ring to was the overwhelming mass of WSU freshmen, who were quickly streaming into every orifice of the Stephenson Complex.

According to Grande, they flooded her friend’s floor first. Then she heard the restless stomping on the level above Grande. She knew it was only a matter of time until the Horde would reach her, and she was right. Within minutes, the Horde entered her hall, hauling their luggage and parents behind them.

Grande sat safely within the confines of her personal space with her door locked as the rooms around her were filled. Despite the overwhelming num­ber of freshmen that had arrived on campus this year, she thought she was safe. Grande was an RA, after all, and that meant she had her own room.

Or so she thought.

Grande said she watched in horror as a key began to turn in her door’s lock, the sounds of fumbling and hushed voices coming through the door. It slowly creaked open, and as it did Grande recalled seeing a terrible scene unfold in front of her eyes: a freshman entered the room.

For the rest of the year, Grande has to share her room. This was a night­mare she had deemed as implausible.

“I thought I’d already served my time my freshman year,” Grande said. “Now I have to deal with the uncomfortable roommate agreement all over again.”

Grande said she watched the fresh­man move in, eyes wide with fear and too nervous to even speak. For a moment, she thought the freshman girl couldn’t even see her. Was it true first-year students could smell fear?

The intruder looked at Grande with a big smile on her face.

“When I heard her cheerfully say, ‘Hi, I’m Katrina and I’ll be your room­mate for the year,’ I wanted to scream,” Grande said.

Grande claimed that when she realized her fear was coming true, she immediately blacked out.

Later she admitted sharing a room isn’t that bad. However, when asked whether she would be an RA again, Grande shook her head so rapidly our reporters were literally blown back by the excessive wind.

“No … I signed up for the perks, which included my own room,” she said. “After the Horde, no amount of free food will make up for the RAs’ lost privacy. May the others rest in peace.”