‘I’m so much stronger than I thought I was’

A race that includes swimming for a long distance, immediately jumping onto a bike while still dripping wet and trying to get your legs to work again during a run can put huge amounts of stress on the body.

The Palouse Sprint Triathlon welcomed many first-time triathletes and seasoned racers alike to train for and participate in a sprint-length race throughout Moscow on Saturday. It came near the end of the triathlon season and allowed WSU and University of Idaho students and faculty to use the summer and Palouse resources to prepare.

UI senior nutrition major Jackie Davis prepared on and off during summer but has been excited to try out a triathlon since her high school years.

“I’ve done a few half marathons before, but it always sounded really cool to me to work my way through triathlon levels and eventually do an Ironman,” Davis said. “I was most nervous about my swimming. I only learned how to swim as a freshman in college and now it’s really cool that I can swim long distances and compete.”

The Palouse Sprint last Saturday was Davis’s first triathlon and she was immediately hooked. 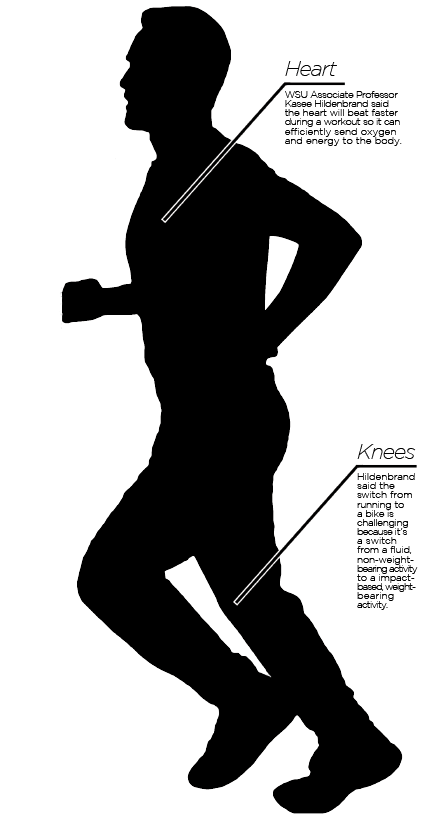 “I realized through training that I’m so much stronger than I thought I was,” she said. “It really brought my self-confidence up and I’d do it again 110 percent.”

Kasee Hildenbrand, a WSU associate professor of athletic training, lost a friend and colleague this summer, Kelly Ward, chair of the sport studies department. She decided she needed to “seize the day” and take advantage of her own life by getting in shape. For the first time in five years she participated in last weekend’s triathlon after taking part several times before.

Hildenbrand trained for six weeks before the triathlon, essentially overtraining her body to be prepared for the race. This over-preparation allowed her to complete the race with as little stress on the body as possible. She said she didn’t feel sore after the triathlon — just tired and accomplished.

Participating in a triathlon can be one of the most strenuous things to do to the body because it uses so many different parts in varying ways.

Hildenbrand’s expertise focused on how to prevent injury when exercising. The six-week training program she used centered on progression. She described her training as starting with one event at a time at lower stress levels. She said she then slowly builds to practicing multiple events in one day and increasing the distance of each event.

This progression training is the best way to avoid injury when preparing for any athletic event, she said.

“If you’re a really good runner, you might think you could do a triathlon without much training,” she said. “But the swim and the bike use different sets of muscles than running and switching from the use of one muscle group to another is really difficult.”

While swimming, running and biking all stress the cardiovascular system and muscles, they do so in different ways. Swimming is the first event of a triathlon and requires the triathlete to train their lungs to deal with the resistance that comes with being in a fluid state, Hildenbrand said.

Immediately switching from swimming — a full body workout — to biking, a core and lower-body workout, can be challenging. This is especially true as the athletes go from the water to the bike while still drenched.

The switch from the bike to the run, however, is known in the triathlon world as the most difficult, Hildenbrand said. The body must switch from a non-weight-bearing activity with fluid motions to a weight-bearing activity and the impact that comes with running. Some racers, Hildenbrand said, feel as though their knees are bending the wrong way when they switch to the run from the bike.

Any athletic training requires the body to become more efficient in oxygen production and transportation. The cardiorespiratory system needs to be trained to work more efficiently. Enough oxygen has to be taken in by the lungs while exercising because the demand for oxygen in the muscles increases.

The heart then has to pump enough blood to the body, which is why the heart beats faster at the beginning of a workout. As the body becomes more efficient, the heart is able to beat less but move more blood to the muscles where the oxygen is turned to energy in the mitochondria.

If it has withstood too much stress, the body applies limitations to signal the athlete to stop. Pain is one of these limitations and it shows the body has been overextended in some way and needs to relax, Hildenbrand said. She hurt her tibialis anterior — shin muscle — while training for the triathlon and knew to rest that muscle for a few days before picking back up.

“Progression training is really important because it can help prevent these limitations from happening,” Hildenbrand said. “They usually happen when you’re doing too much too soon or when you’re doing some activity that is aggravating the body in a bad way.”