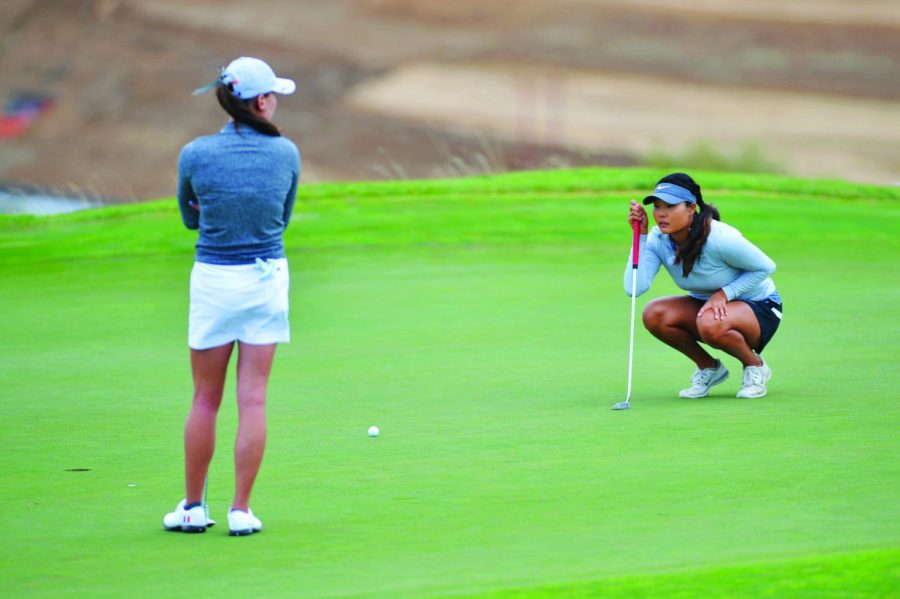 Then-senior Cherokee Kim scopes down her putt at the WSU women’s golf Cougar Cup on Sept. 20.

The team traveled to Albuquerque, New Mexico, for the two-day Branch Law Firm/Dick McGuire Invitational. Of the seven women rostered, only five competed. They played in a total of three rounds to end with a combined score of 886 (+22).

Junior Marie Lund-Hansen scored the best on the team finishing the two rounds Monday with a score of 70 (-2) and another score of 72 (even). By the end of the day, Lund-Hansen was tied with five others for 10th place and a combined score of 142 (-2).

WSU ended the two-round day No. 9 amongst the 16 teams competing. After a long day, the team would tee off at 6:30 a.m. Tuesday to finish the tournament.

The final round brought a challenge to the team’s scores. Lund-Hansen shot a 76 (+4) ending with a final score of 218 (+2) for the three rounds, dropping her nine spots from where she entered the day and tying her at 19th to finish.

Head Coach Kelli Kamimura was proud of her team’s performance and is looking forward to the upcoming season.

“I am excited about the growth I’ve seen in the team this week, especially with two new freshmen in the lineup,” Kamimura said. “We had a couple of bumps in the road today, but we learned from it and now know what to work on to take into Coeur d’Alene.”

WSU will compete next at the Coeur d’Alene Resort Collegiate Invitational tournament Sept. 24 and 25 in Coeur D’Alene, Idaho.