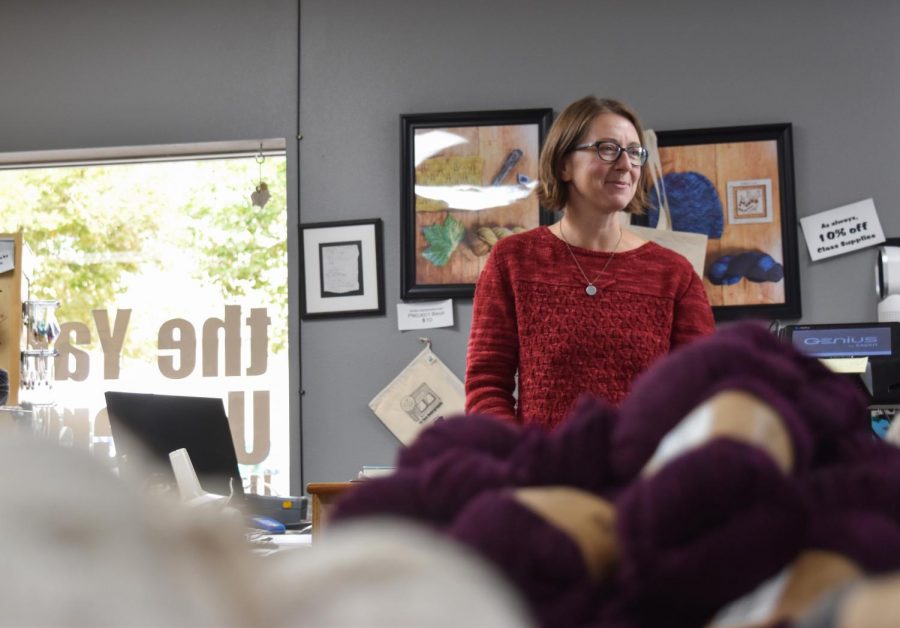 Shelley Stone, owner of The Yarn Underground, LLC in Moscow, Idaho, reminisces about how she started the local store Tuesday.

Moscow is home to many local businesses but few can claim to have the same eight-year tenure The Yarn Underground, LLC has.

Shelley Stone has owned and managed her yarn store since it first opened in a basement. She said in that time she had to learn a lot.

“You know, I majored in recreation and forestry,” Stone said. “I didn’t have any business, accounting, finance, economics or any background that would help me. If I sold five skeins of brown yarn on the first day we were open, does that mean everyone loves brown and I should buy 20 more skeins? By the way, it doesn’t. I tried that.”

Stone said the store changed a lot over the years. She eventually began planning her events six months in advance in order to keep the business running smoothly.

Though the store moved locations, Stone wanted to keep the name The Yarn Underground because of the things a person can find in her store but not anywhere else.

“Some people are into slinky and silky and some people want some crunchy texture to their knitting,” Stone said. “I try to have the full array. It’s fun to help people on their journey.”

The walls of The Yarn Underground are decorated with a variety of colors and textures. Stone said it’s important to keep different feels and characteristics. She keeps alpaca, yak and cashmere in her store to appeal to a number of styles.

“A lot of times if you go to a big box store, it’s mostly acrylic,” Stone said. “Wool doesn’t even come up in that conversation.”

Stone said anyone is welcome to drop by and enjoy the atmosphere, as well as her materials, for Knit-Night Thursdays.

“I don’t know the last time you tried to take a group of 10 people out and ask, ‘can we hang out here for free?’ ” Stone said. “Because no one says yes. If you go to a coffee shop, that’s [$5] a head and then they scowl at you after an hour or two.”

Stone said sometimes there are so many people in the store she runs out of chairs. She believes knitting has had a strong resurgence over the last 20 years or so.

To some, the task of learning how to knit may seem daunting, but Stone said the many classes she holds every Saturday mint new knitters each year.

“I realize when you walk in here and you look at things on the wall, you realize that you didn’t even know yarn came in that shape to begin with,” Stone said. “That seems daunting, but I’d like to think knitting can be a journey into your own creativity. And what else are you doing with your time?”

Ladawn Baker enjoyed making quilts for 26 years before coming to The Yarn Underground, but after a beginner class she said she was hooked.

“It was a great class,” Baker said. “None of us knew a darn thing. We all walked away being able to do some basic knitting. Our teacher Robin was very patient with us.”

Baker said her skills as a quilter didn’t transfer well to knitting, but loves the peaceful feeling knitting gives her after a crazy day.

“I love coming in here,” Baker said. “You get lots of help and personal attention you might not get at chain stores and definitely just the hometown feel.”

Alayna Seely is another newcomer to knitting but said she was impressed by the store the first time she came in.

“I just said, ‘ooh, pretty,’ ” Seely said. “I loved the examples that [Stone] had of her work. It was something I appreciated seeing. I saw what could be made from the stuff that she had.”

After taking a spinning class at The Yarn Underground, Seely said she encouraged anyone who hadn’t knitted before to give it a try.

“I’d say there is a reward in and of itself for doing something like this,” Seely said. “I’d also say it’s really peaceful and there is a sense of satisfaction when you have something that you made and you can say, ‘I did this.’ ”

The community has supported The Yarn Underground for years, and with new people coming in Stone said she was glad she chose to start her passion project in Moscow.

“I’ve just gotten to know people over time more than I had any idea,” Stone said. “I am so grateful because I feel wanted, loved and appreciated and that probably means more than anything. It’s hard to go to a job every day when you don’t feel those.”