Head Coach Jen Greeny has her crew off to a 7-0 start in non-conference play this season, they aren’t done yet 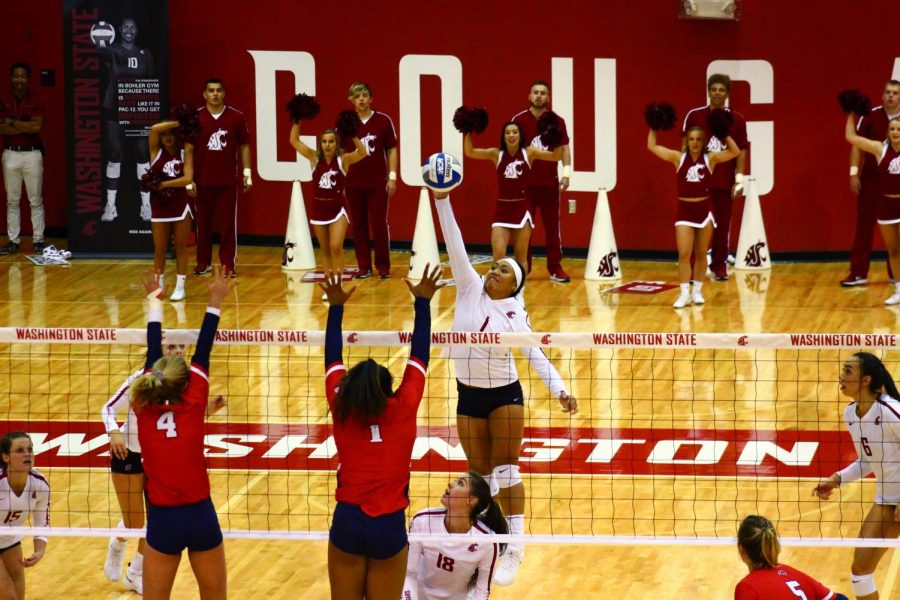 Sophomore outside hitter and setter Penny Tusa spikes over a pair of Stony Brook blockers Friday in Bohler Gym.

No. 22 WSU volleyball travels to Bowling Green, Kentucky, playing in its second-straight weekend tournament. The team is 7-0 and will look to end the perfect non-conference start at the Western Kentucky University tournament before starting Pac-12 play Thursday in Seattle.

Head Coach Jen Greeny said she is happy with the way the team has played up to this point in the year.

“It has been a good preseason,” Greeny said. “I think we are getting better every single weekend.”

She said that, heading into this tournament on the road, the Cougars will look back at the first two weekends where they traveled and came out with the win at someone else’s gym.
Greeny said although she has been happy with the overall results, there is still a lot she looks for out of the team before its Pac-12 season begins.

“We will work on some of those things this weekend,” Greeny said. “This is a really tough tournament we’re heading into with some great teams.”

The team doesn’t look too much into the new coaches’ poll rankings that moved the Cougars up from No. 23 in the nation to No. 22, Greeny said. They just want to try and get better every single day and see what happens from there.

Last weekend WSU kept the ball rolling as it went 3-0 in the Cougar Challenge Tournament, and it will look to build off some of the performances they got heading into the WKU tournament.

Like the Cougar Challenge, the team will have to play two matches in the same day, which can be difficult for a team.

“More than one match in a day is a little bit tiring,” Greeny said. “It’s a quick turn-around.”

The players get less recovery time as well as less time to prepare for the opponent. Greeny said that in-game changes must be made a lot more and much quicker than when there is a day in between matches.

WSU also got great production out of players including senior outside hitter Taylor Mims, which was something the team really wanted.

“We need all of our players to step up and have great matches,” Greeny said. “We can’t always rely on Taylor.”

The Cougars will face Northern Illinois University at 8 a.m. Friday and Western Kentucky University at 5 p.m. To end the WKU tournament, WSU will take on East Tennessee State University on Saturday at 9 a.m. All matches will be held in the E.A. Diddle Arena.