‘Believe in something, because it may save your career’ 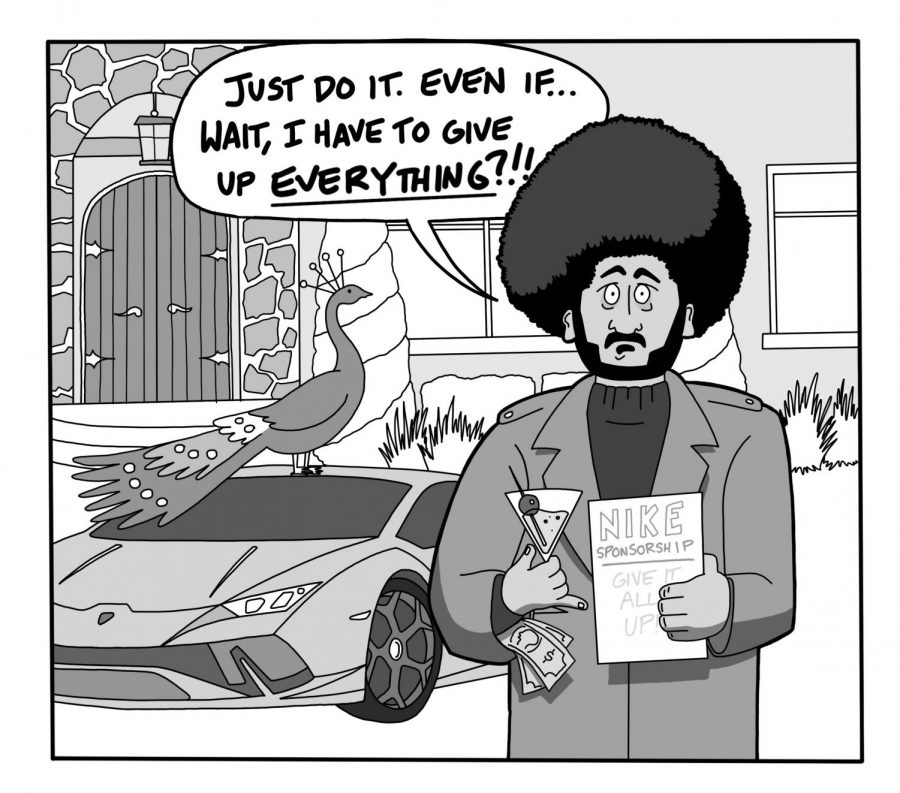 An ad campaign from a footwear company features a man who’s famous for not standing on his feet.

That wasn’t a joke — it actually happened. Once we thought anthem kneeling was dying out, Colin Kaepernick comes back into the spotlight, but this time it’s for Nike’s “Just Do It” campaign.

When I first saw the ad, I just assumed it was a promotion for Nike knee pads. However, the caption did not say “for those with the weakest of knees.” Instead, it was more political:

“Believe in something, even if it means sacrificing everything.”

If you are unfamiliar with the former 49ers quarterback, he made headlines two years ago when he was “brave” enough to start kneeling during the national anthem.

“I am not going to stand up to show pride in a flag for a country that oppresses black people and people of color,” Kaepernick said in an interview with NFL Media.

His social justice-driven actions soon became the center of controversy as it spread to other teams and leagues across the country. The form of protest, while peaceful, was often said to be disrespectful of past and current patriots who put their life on the line for the flag.

The benched quarterback finally got the attention he was hoping for, but eventually opted out of his contract with the 49ers. Kaepernick hasn’t played professional football since then. However, it seems that his current objective is to grow his status as a social justice warrior.

After winning GQ’s “Citizen of the Year” and Amnesty International’s “Ambassador of Conscience,” we shouldn’t be surprised to see his face on a Nike advertisement. Even so, I’m not sure I understand the connection between him and Nike’s quote regarding sacrifice.

Because really, what did Kaepernick actually sacrifice?

For starters, Kaepernick made the decision to opt out of his San Francisco contract when the risk of not being rehired was obvious. Second, when your work is nationally broadcasted, openly expressing your political views gives you the illusion of courage and compassion.

Take the Golden Globes for example. Remember when many called Meryl Streep brave for being anti-Trump in her acceptance speech? To be fair, she may actually be a bold person. But if you worked in a leftist industry and were surrounded by people who would praise you, it wouldn’t take much courage to express a liberal opinion.

To discuss these types of situations, I met with Assistant Professor Jay Hmielowski, a member of the Edward R. Murrow Political Communication research group.

“It’s our nature to get along with people and be social creatures,” said Hmielowski. “If we know we have supportive views, we’re going to share things that might be a little more controversial.”

The same goes for the inspirational martyr that is Kaepernick.

Can Nike really believe he put “everything” on the line?

If they did, the Dow-listed company wouldn’t be parading his face around. The reality is that being controversially progressive is quite the money maker. According to MarketWatch, Nike’s online sales jumped by more than 30 percent since the ad was unveiled. And as far as the former quarterback goes, he’s received another overcompensated contract.

It’s really quite amazing the “risks” of both Kaepernick and Nike resulted in waves of millions and millions of dollars.

We’ve let the age of redefining basic concepts go too far. It is unfortunate enough that we can’t agree on definitions of race, gender or legal immigration. But please, let’s redefine the word sacrifice because we put multi-million dollar celebrities on a pedestal.

Believe in something: it just might save your career.