Senior trained with NFL players growing up in New Orleans, has tattoo on arm to remember Hilinski 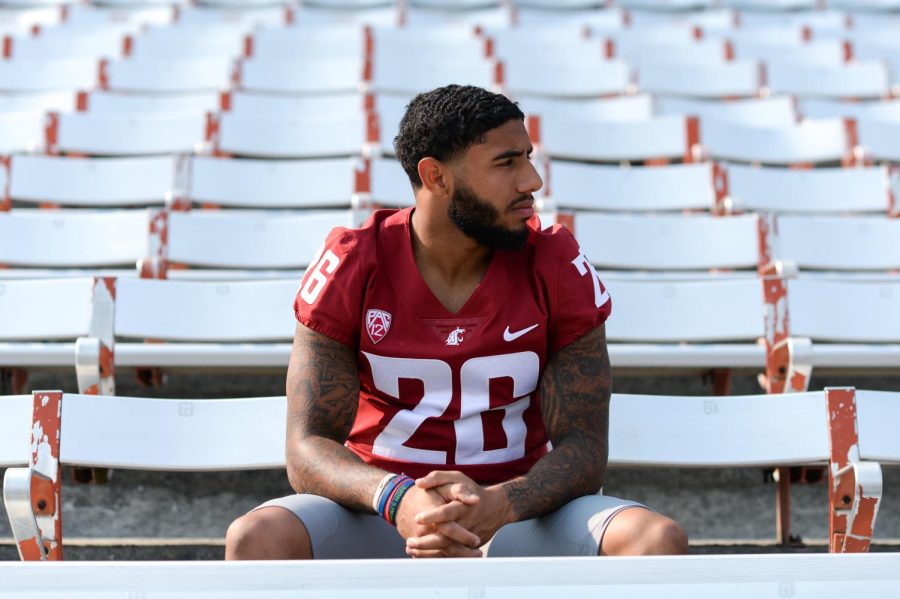 Senior nickel Hunter Dale received about 30 scholarship offers and planned on attending University of Florida before a series of unforeseen events led him to Pullman. “Once I figured out I was coming here, it was perfect,” he said.

When Hunter Dale realized playing football at a Division 1 school was a reality, WSU wasn’t first, second, third or even fourth on his list. In fact, Pullman wasn’t even on his radar.

Of the roughly 30 scholarship offers Dale received while still in high school, none of them came from the crimson and gray.

But the senior nickel wouldn’t take back any of the ups and downs that led him here.

“Once I figured out I was coming here, it was perfect,” he said.

Dale’s journey began in his home­town of New Orleans when he was about 6 years old after Dale’s dad, Wyatt Harris, started training him.

Harris, who played wide receiver at Southern University and A&M College, is the owner of Sonic Boom Speed Conditioning & Strength Training Academy. Through his busi­ness, Harris has trained a number of athletes who have played in the NFL including Odell Beckham Jr., Jarvis Landry, Landon Collins, Tracy Porter, Mark Ingram and Marques Colston.

Dale got to train alongside all of these athletes and when he was in junior high and high school, he didn’t work out with his teammates. Instead he lined up one-on-one with Colston, who was in the NFL at the time, and mastered his coverage skills against the best.

Harris said players such as Colston and Ingram admired Dale because of his work ethic and dedication to the game. Harris said Dale was also an elite baseball player in high school and recalled one time when he brought Colston and Ingram to one of Dale’s games because they wanted to see him pitch.

Dale said Harris wasn’t easy on him when he was younger which helped shaped the player he is today.

Harris said it was all about business when he trained his son and he made sure he had a complete game both physically and mentally.

“I treated him like a stranger when we was training,” he said.

Despite the notoriety of the players Dale was training with, he never was starstruck and instead soaked up as much knowledge as he could.

“Since I’ve been around so many famous people that my dad has trained, I don’t really get up to the hype,” he said.

These athletes gave Dale advice on how to handle pressure, prepared him for the college recruiting process and laid out the steps for him to play at the next level of football and beyond. This experience helped Dale as he began the recruiting process in high school.

Ever since he could remember, Dale’s dream was to attend Louisiana State University in Baton Rouge where his grandfather Peter Dale Sr. played football, so naturally the Tigers were at the top of his list.

Unfortunately, LSU didn’t feel the same way. Dale said the team told him he was too small. While still upset, he immediately began looking for a team that would face LSU at least once a year and that’s when he stumbled across University of Florida.

During his freshman year in high school, then-Florida Head Coach Will Muschamp started recruiting Dale and he received his first offer from a team in the Southeastern Conference.

Despite numerous offers from other schools, Dale committed to the Gators until he had a change of heart right before his senior season in high school. He decided he wanted to go to University of Nebraska.

But at the end of the Cornhuskers’ 2014 season, the team fired Bo Pelini, the head coach at the time, and Dale once again reconsidered his decision.

Dale decided to return to Florida and planned on announcing it on National Signing Day, but a week before he was scheduled to do it the Gators fired Muschamp.

Now the defensive back was scram­bling to find a team a week before sign­ing day. He reached out to University of Oregon, but the Ducks told him they were full and could only offer him the opportunity to grayshirt.

A grayshirt is when an athlete attends a college for the first semester as a part-time student and doesn’t receive a scholarship until the start of their second semester. This means the player doesn’t see the field the first season, but still has five years to com­plete four seasons with the chance to redshirt at some point.

Dale didn’t want to sit out a year, so he looked at the University of Missouri. At that time, the secondary coach for Missouri was Alex Grinch, who served as the WSU defensive coordinator from 2015-17.

The Tigers were interested in Dale but chose a junior college transfer over him. Still searching for a college, Dale’s dad got in contact with Jarrail Jackson, who was the director of play­er relations and worked in recruiting for WSU at the time.

Jackson told Harris that Grinch was just hired as the new defensive coordi­nator and eventually Dale received a phone call from Grinch. The conversa­tion lasted over an hour and a half and ended with Dale receiving a scholar­ship from WSU.

Dale committed to WSU about a month after signing day and was intro­duced to a whole new environment that took some time getting used to.

“I had to open up and adapt to a new culture, new people and a new way of living,” he said. “It changed me because I had to get used to not seeing my family.”

It took a few years for Dale to break out and find his spot with the Cougars, but last season Grinch moved Dale to nickel where he started all 13 games and thrived.

Now in his final season at WSU, Dale and the rest of the defense are adjusting to having Tracy Claeys as the defensive coordinator.

Dale admitted losing Grinch was tough, but the group hasn’t lost the Speed D mentality he brought to the program despite it coming from a dif­ferent voice.

“We still have that ingrained in us,” he said.

The team is also missing Tyler Hilinski this year, who Dale said was someone he could always talk to.

“Ty never not had a smile on his face, never was the down person,” he said. “I loved Tyler. He was an awe­some guy.”

To remember Hilinski, Dale got a tattoo on his arm that features the No. 3 and the nickname, Klink, which was used commonly by his teammates. Dale said he had an open spot on his arm that was perfect for the tattoo and thought it would be a great way to carry on his legacy.

“I can never get Tyler out of my memory,” he said.

Dale recalled the last time he saw Hilinski. On the morning of Jan. 16, Dale was Hilinski’s running partner for a regular workout at the Indoor Athletic Training Facility.

Dale remembers racing Hilinski back to their cars after the workout and asking him when they were going to get together to do a seven-on-seven drill later in the day, and Hilinski tell­ing him he was going to send out a text with the details.

That was the last time Dale heard Hilinski’s voice. Later that day around 6 p.m. the whole team gathered for a meeting where they received the news of his passing.

“My heart dropped,” he said. “It didn’t seem real. Nothing seemed real until his funeral.”

“It could be people that are happy,” he said. “You can’t treat people dif­ferent. You can never expect them to always be OK, even if they look OK.”

No matter what, Dale said Hilinski will always be with the team.

“Ty has had an impact on so many people even after his death,” he said. “He’s never going to be forgotten here.”