No. 22 Cougars are now 8-0 after first match of weekend tournament 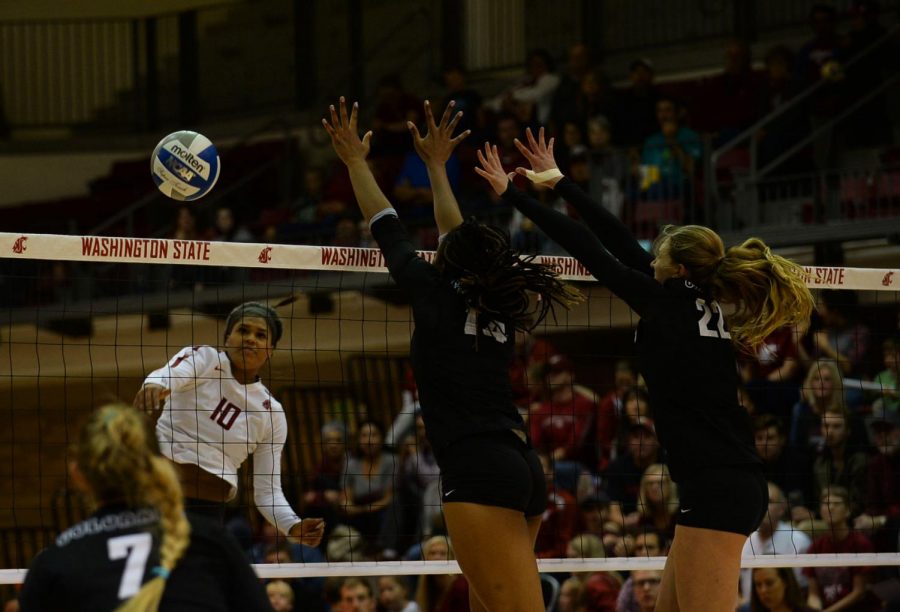 Then-junior outside hitter Taylor Mims attempts to spike the ball past a pair of Colorado defenders Oct. 6 at Bohler Gym.

WSU volleyball started off the WKU Tournament just the way they had hoped, with another win. The No. 22 Cougars (8-0) got a clean sweep of Northern Illinois University (2-11) and dominated in each of the three sets.

Senior outside hitter Taylor Mims got the Cougs off to a hot start as she had three kills within the first eight Cougar points. WSU had an early 8-2 lead that continued extending throughout the first set.

Up 18-10, WSU really put its foot on the gas and ended the first set with a final score of 25-14. Mims finished with eight kills and a .727 hitting percentage in the first set.

Set two was more of the same as the Cougs got out to an early 6-2 lead. Senior outside hitter McKenna Woodford ended Northern Illinois’ comeback attempt with three straight kills to bring the set lead to 20-13.

Some NIU errors helped the Cougars close out the second set over the Huskies by a final of 25-16. The third set would start out close at the very beginning before yet another run by the Cougs.

WSU took control of the third and final set by going on a 7-1 run, bringing its lead to 10-3. From that run, the set was pretty even but the lead was too big for the Huskies to overcome.

Mims ended any hope for NIU with a big kill and the Cougars took the set 25-18. She was also named the player of the match, ending with 15 kills, two aces and six digs with a .467 hitting percentage.

WSU totaled 10 blocks as a team to NIU’s one. The Cougars .459 attack percentage was also the highest of the 2018 season so far.

The Cougars will look to continue their hot start as they face the tournament host, Western Kentucky University at 5 p.m. Friday in the E.A. Diddle Arena.