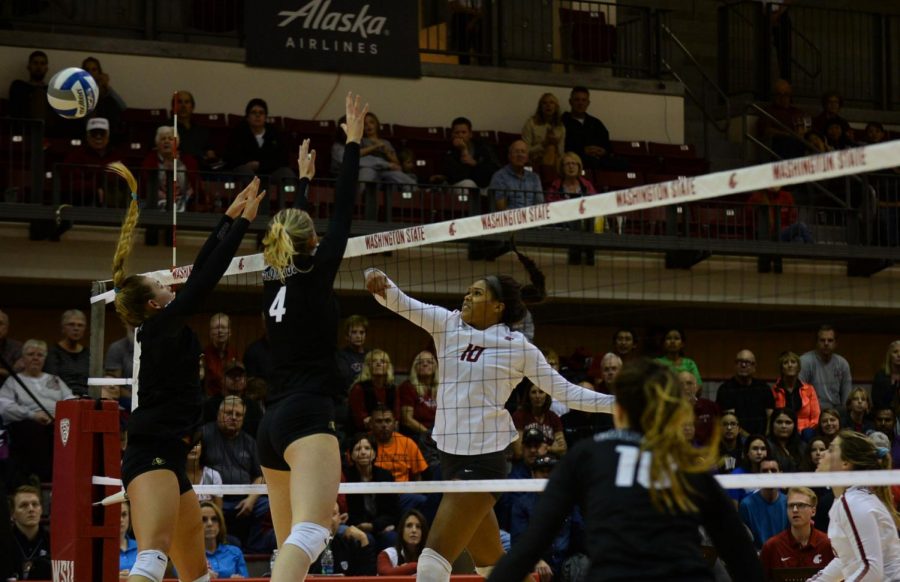 Then-junior outside hitter Taylor Mims spikes the ball past a pair of Colorado defenders Oct. 6 at Bohler Gym.

No. 22 WSU women’s volleyball went to five sets for the first time this year and was handed its first loss of the season against East Tennessee State University.

The final match of the WKU Tournament at E.A. Diddle Arena for the Cougars saw the first set go to the Bucs. A 10-2 run wasn’t enough for the late comeback attempt and East Tennessee State took the first set 25-23.

Senior middle blocker Ella Lajos played a big part in the second set as she had kills to start an early run, as well as to finish off the Bucs late.

The Cougars pushed the lead to 21-15 late and finished out the set behind kills from Lajos and senior outside hitter McKenna Woodford. The second set ended by a final score of 25-17.

Tied at one set a piece, the third set was an intense series of runs by both teams, the first by ETSU bringing the team to an early 7-3 lead. Senior outside hitter Taylor Mims helped lead the Cougs on a 5-point run of their own, taking a 20-19 lead.

After trading points, the Bucs got the last run of the match, ending the third set by a score of 25-22 and taking a 2-1 lead over WSU.

Trying to stay unbeaten, the Cougs came out strong in the fourth set. They took a lead at 13-11 and never gave it up, winning the fourth set 25-18.

Mims, Woodford and Lajos were all in double-digit kills after the fourth set. The momentum from that carried into the beginning of the fifth set as they got out to an early 4-1 lead.

ETSU crawled back and battled back and forth with the Cougs. Eventually, the Bucs took the set 15-13 despite a season-high 17 kills from Woodford.

This match marked the end of a 9-1 preseason for WSU. The Cougars head to Seattle to start conference play Thursday against University of Washington.