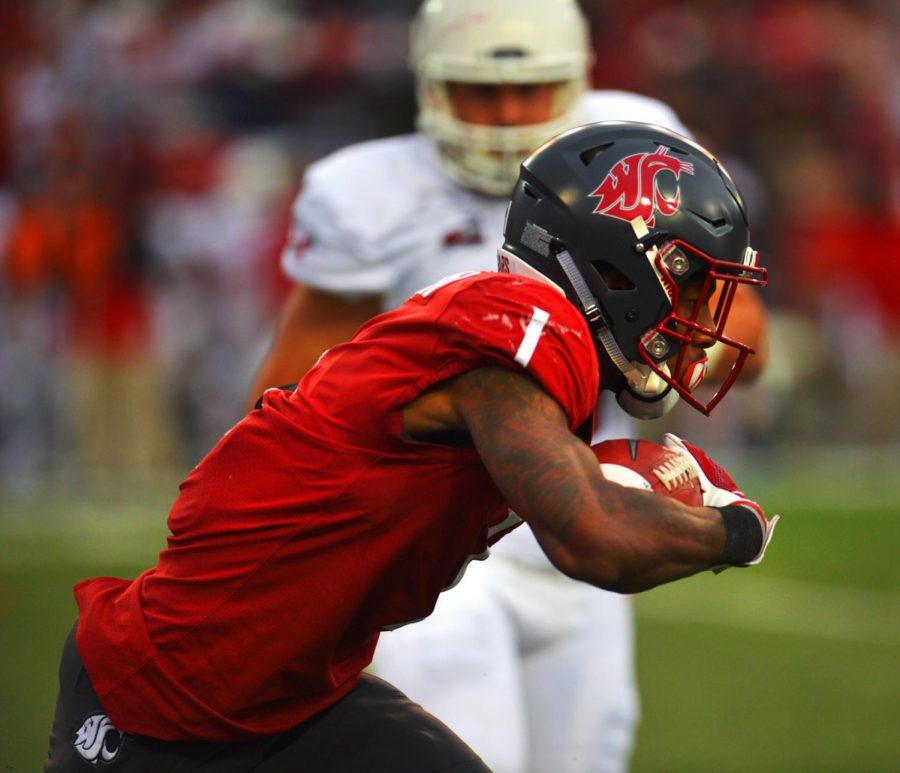 Sophomore wide receiver Tay Martin runs the ball down the sideline in the game against Eastern Washington Saturday evening at Martin Stadium.

Cougar football kept their perfect record for the season as they took down neighboring Eastern Washington University on Saturday night with by a final score of 59-24.

The last time WSU and EWU faced each other was two years ago for the opening home game of the 2016 Cougar football season. In the game, EWU upset WSU 45-42.

This time around things were different.

Redshirt junior running back James Williams led the effort for the Cougars by tallying three rushing touchdowns in the game.

Williams said he and the other running backs made sure to make the most of the touches they got Saturday when the team only racked up 41 rushing yards in the game and focused more on the passing attack.

“We just got to make plays whenever we get our opportunities,” he said.

The Cougs started the game Saturday night with a five-yard delay of game penalty, leading them to a quick three and out.

With the interception by Thompson, the momentum shifted to the Cougar offense. Starting on WSU’s 32-yard line, the Cougars marched down the field in only six plays and Williams rushed for 1 yard into the endzone completing the 68-yard drive and scoring the first touchdown of the game.

In the next three possessions neither team could convert on third down, leading to three consecutive punts. With five minutes left in the first quarter, graduate transfer quarterback Gardner Minshew II ended the scoreless streak by completing eight straight pass plays resulting in an 83-yard drive and another touchdown.

At the end of the first quarter, the Cougars led the Eagles 14-0 and only allowed EWU to rack up 35 total yards of offense. In the start of the second quarter, the Eagles hit a 37-yard field goal to give them their first points of the game.

On the ensuing kickoff, WSU responded with points of its own when redshirt freshman wide receiver Travell Harris returned the kickoff 100 yards to give WSU a 21-3 lead.

“I saw the ball high and it was kind of outside and I just caught it and I saw them kind of knife in,” Harris said, “and after that I just followed [redshirt senior running back] Keith [Harrington] and I was gone after that. I made a cut and after that I was just off to the races.”

With both teams scoring another touchdown in the remaining minutes of the quarter, WSU held a 28-10 lead at halftime.

At the start of the second half, the Eagles went 75 yards down the field in three minutes and 19 seconds to score another touchdown, putting them within 11 points of the Cougars.

After the opening EWU drive, things started to look bad for the Cougars as they went three and out. Once the Eagles had possession again they moved all the way down the field and setup for a field goal before a holding penalty cost them a chance at three points and they had to punt the ball.

In the next few possessions, the Cougars and Eagles traded touchdowns, resulting in a 35-24 score with just over a minute left in the third quarter. Prior to the end of third quarter, the Eagles scoring was put to an end for the night when redshirt sophomore linebacker Jahad Woods intercepted Gubrud’s pass on the Eagles 27-yard line.

WSU ended the game with a total of 524 passing yards, while EWU finished with 231 passing yards and 141 rushing yards. Minshew passed for 470 yards, feeding 149 yards to sophomore Tay Martin, who was the leading receiver Saturday night.

Head Coach Mike Leach said Martin did a great job against EWU and was proud of his performance and ability to fill in on special teams.

“I thought he played hard throughout the game and Tay also plays on a lot of special teams and so there’s a lot of miles on Tay,” Leach said. “He’s kind of a special athlete, you know he’s a starter on two or three of the special teams.”

WSU travels to Los Angeles, California, next to face University of Southern California at 7:30 p.m. Friday.