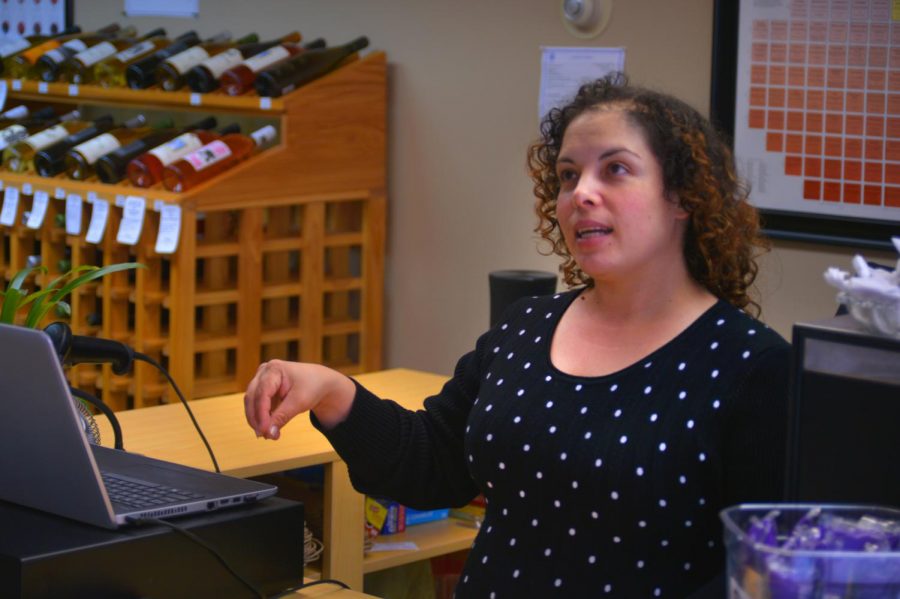 Owner Willow Falcon says her business is “a place to appreciate the social atmosphere while enjoying a glass of wine” Thursday at Noshies.

In its first few weeks, Noshies has established itself as the only bottle shop stationed in downtown Pullman.

Owner Willow Falcon came up with the name Noshies from the Yiddish word nosh, which means eating snacks. She wanted to capture the same emotions she felt when she was growing up and share them with the community.

“There was always a portion of the day where we’d get together, sit around and nosh,” Falcon said. “It was just sitting, eating, talking [and] getting to know each other better. That’s the best of a family gathering. That’s why I called the store Noshies.”

Falcon said it’s been a smooth transition between the opening days to now. She got her experience from running the tobacco store next door, Glassphemy.

“It was easy to put together the concept of Noshies,” Falcon said.

The store itself is lined with shelves of bottles and several coolers to keep beverages cold. There is also a glass case full of cheeses and other snacks ready to be paired with the drinks in the store.

Falcon said there are a lot of very important similarities between Glassphemy and Noshies that make her confident for both of their futures.

“It’s a little bit different,” Falcon said. “But for me, my business philosophy and how I operate a store is going to be the same. A glass art piece can have the same coveted, sought-after audience as a really well-crafted bottle of beer or wine. So those things aren’t that different.”

For the first eight weeks of business, Noshies has been without a sign on its door. Falcon said she would eventually get one in the upcoming weeks but noted there was so much community interest in her bottle shop that people discovered it anyway.

Falcon mentioned tastings in particular received a lot of commotion in the Pullman area. The tastings became so successful, she decided to expand from just having them on Thursdays to Saturdays as well.

“I know the first few [tastings] that we had felt really social,” Falcon said. “People came [and] stopped by expecting to stay for five or 10 minutes but ended up staying for an hour and a half.”

Noshies serves more than cheese and wine, but Falcon said she encourages people to try to have consistent wine experiences they enjoy.

“Wine is about knowledge to a degree,” Falcon said. “But it’s also about the people you’re with and the happenstance. Sometimes the best pairings I’ve ever had were on accident, not because I thought really hard about it. It was just available, fresh and the magic happened in that moment.”

In its short life, Falcon’s bottle shop has garnered five-star reviews from users on social media.

Falcon said she is planning on expanding her business to eventually have a table where customers can sit outside and a kitchen to make prepared food. She said Noshies was just beginning and that the bottle shop will be around for a long time.

“I see Noshies being here for decades,” Falcon said. “I hope one day I’ll be super old and people will say, ‘you got to go down to Noshies, they’ve been here forever.’ ”