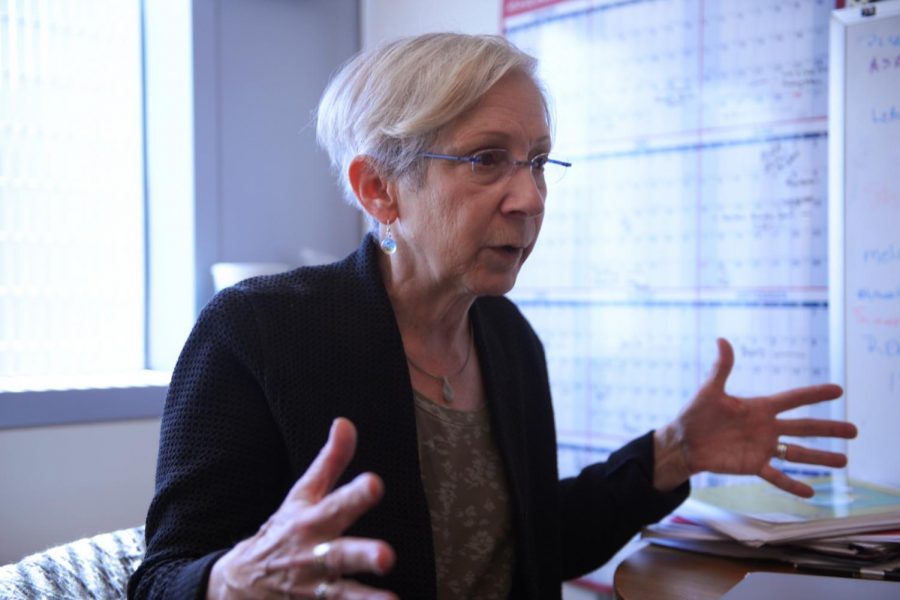 WSU Professor Patricia Hunt discusses the harmful effects of BPA on long-term health, and says she hopes to study its effects in combination with other chemicals Friday in Biotechnology/Life Sciences Building.

WSU researchers have found that alternatives to the chemical bisphenol A, commonly known as BPA, are causing genetic abnormalities in mice.

This discovery is not the first time Patricia Hunt, a professor in the WSU School of Molecular Biosciences and the lead author of a study in the latest issue of “Current Biology,” has dealt with BPA.

“I was pulled into the BPA world over 20 years ago and I have watched this whole BPA tsunami,” Hunt said.

Back then, while conducting mouse studies unrelated to BPA, Hunt and her colleagues saw sudden and dramatic change in the number of unhealthy eggs produced by female mice.

She realized a worker in the animal facility had used the wrong detergent to wash the cages, which caused them to leach BPA. The result was an increase in chromosomal abnormalities in the lab animals and their offspring.

Hunt and her team just recently discovered reproductive problems in mice kept in plastic cages made with Bisphenol S (BPS), a common replacement for BPA.

The mice exposed to BPS experienced changes in how the germ cells in their testes and ovaries copied and spliced DNA while producing sperm and eggs, Hunt said. The researchers found similar results with alterative chemicals BPF, BPAF and diphenyl sulfone. This led to a reduction in viable sperm and an increase in abnormal eggs.

It is becoming increasingly difficult to conduct experiments without contamination from plastics, she said.

“These replacements were behaving almost exactly the same way that BPA did,” Hunt said.

BPA has been used in plastic products such as take-out boxes, water bottles, cash register receipts and food-can coatings.

“We think of plastics as permanent things and they’re just not,” Hunt said.

Hunt’s and others original research led the U.S. Food and Drug Administration (FDA) to ban the use of BPA in baby bottles and children’s drinking cups in 2012.

Last month, however, the FDA said BPA does not pose a health hazard when used in food containers. Additionally, the American Chemistry Council said earlier this year that a large FDA study found the chemical safe as it’s currently used.

However, Hunt said the FDA studies use an old school of thought.

“It is an outdated approach that is designed to think of chemicals only in terms of their toxic effects – how much will kill us?” Hunt said.

But consumers shouldn’t just be worried about what could kill them, Hunt said. She is concerned with the lowest dosage that would cause health problems instead of what would be considered toxic.

More research into how BPA alternatives interact is the next step, Hunt said. She encourages people to take measures to prevent contamination.

“Be aware of what you are using, think of plastics as things you need to keep an eye on over time,” she said. “If you see any signs of damage you should just get rid of it.”