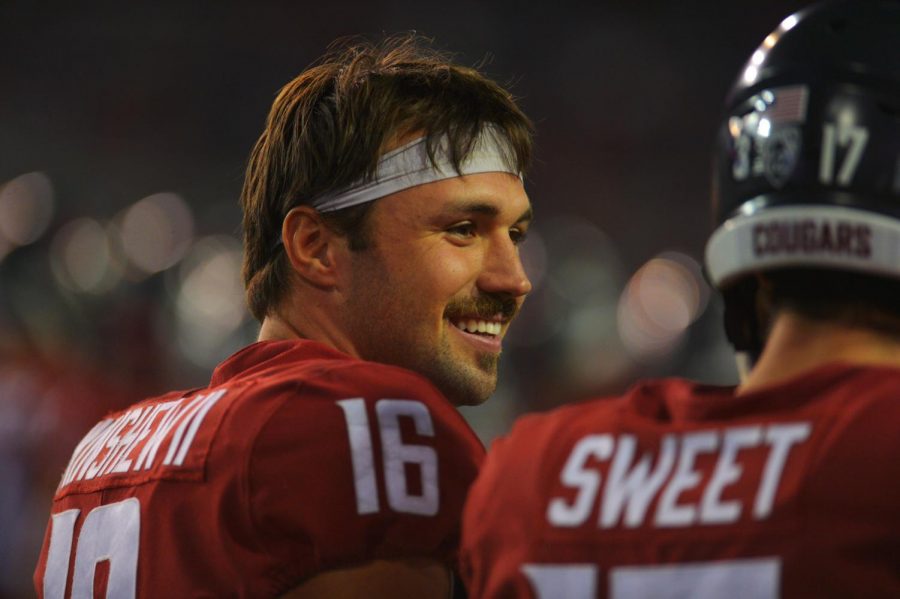 Graduate transfer quarterback Gardner Minshew II talks with senior wide receiver Kyle Sweet as they leave the field in the game against Eastern Washington University on Saturday at Martin Stadium.

After a disappointing loss to Eastern Washington University in 2016, the WSU football team picked up an electrifying win against the Eagles last Saturday. The final score was a staggering 59-24, and there to lead the Cougars to the lopsided victory was graduate transfer quarterback Gardner Minshew II, which is why he is the Evergreen’s Athlete of the Week.

Minshew finished his night with a career-high 470 yards through the air, completing 45 of his 57 attempted passes. He threw two touchdown passes and of the seven times the Cougars got in the red zone, Minshew led his offense to points on each trip.

Overall, the game was fairly one-sided. The whole way through, WSU’s explosive offense and sturdy defense proved to be too much for EWU.

As the season has kicked off, Minshew has shown his strengths as WSU’s newest quarterback. His completion rate through the first two weeks was 66.7 percent. This last week against EWU he completed passes to the tune of a 78.9 percentage.

Once Minshew’s night was finished, he raised his season completion percentage to 70.9 percent and has accumulated 1,203 passing yards over three weeks.
Minshew showed great capability in his position, maintaining grace under pressure and ultimately getting his throws off at just the right moments whether his receivers were near or afar.

During the post-game press conference, Minshew got the chance to share his thoughts on being able to throw the ball 50-plus times a game.

“Yeah man, it it’s awesome,” Minshew said. “It’s always awesome. You know winning and putting up points all of that is all fun. Having receivers make plays, running backs and O-line that gives you time. Yeah, I’m having a blast right now.”

A lot of fans expected a high-scoring game from both sides. It was seen as a game of sword against shield —the Eagles’ high scoring stats against the Cougars’ strong defense. It resulted in EWU feeling the full wrath of the Cougs’ Speed D.

WSU brought the swords, shields, trebuchets, arrows and heavy artillery and it quickly became a catch-up game for the Eagles’ offense. Minshew being at the helm for the Cougars’ 3-0 start shows great promise for what’s to come for WSU football.