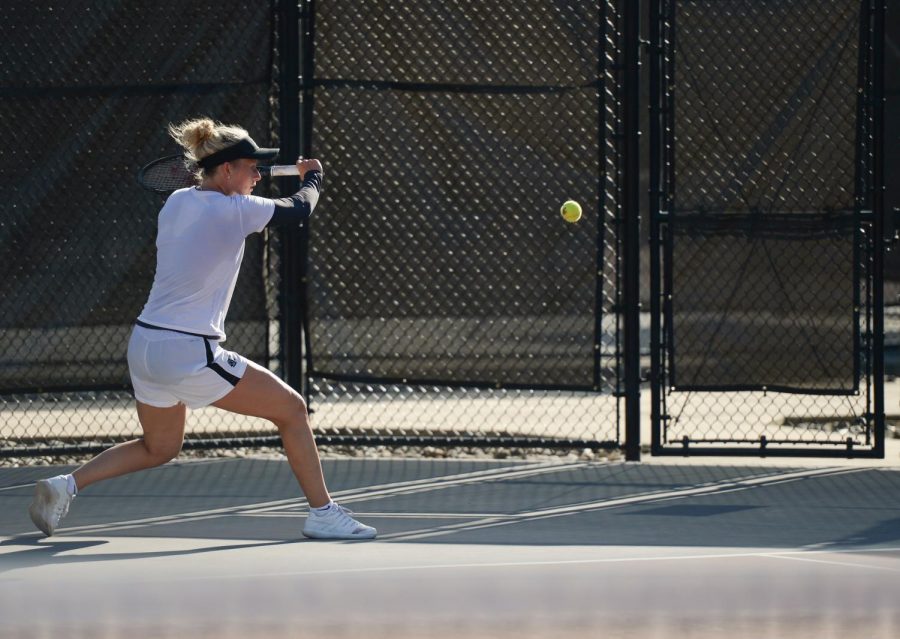 Senior Aneta Miksovska practices on the WSU Outdoor Tennis Courts on Wednesday afternoon. She was won 50 matches during her career.

The WSU tennis season will start with its opening Cougar Classic event Friday. With three new student-athletes and a new assistant coach, tennis fans have a lot of new faces to look forward to this year.

For the season-opener, the Cougar forces are divided between the Oracle ITA Masters in Malibu, California, and the Cougar Classic in Pullman. Ranked No. 17 in the Intercollegiate Tennis Association preseason poll, sophomore Michaela Bayerlova along with longtime Head Coach Lisa Hart will be in Malibu competing against the top collegiate talent in the nation.

Meanwhile, the rest of the Cougar tennis team will host its first non-conference event of the season and former student-athlete and new assistant coach Trang Huynh will be at the helm. Huynh was a WSU tennis student-athlete in the 2015-16 season, and after seeing a prospective coach in Huynh, Hart offered her an assistant coaching position.

“I’m really glad and fortunate to be working for Lisa [Hart],” Huynh said. “I’m really, really excited to be back here and help … I’ve just really been doing my best to transfer what I have from when I was a student-athlete, all of my experience, to our players now.”

During Wednesday’s practice Huynh said her student-athletes were staying light and having fun all while maintaining the competitive atmosphere.

Among the leaders of the Cougar tennis team is senior Aneta Miksovska. Entering her final season as a Coug, she said she is ecstatic to start another season with her teammates.

“This is my last year — I want to make it the best, you know?” Miksovska said. “We have a new team, new teammates, so I’m just really excited to win together because last year we had a very good season … I’m excited to make it even better this year.”

Miksovska said she believes in Huynh’s mantra that they should be having fun when they are competing.

“I think it’s so much fun to see us cheering and being excited, pumped up and winning because you know we win a lot,” Miksovska said.

The Cougar Classic will be played on the WSU Outdoor Tennis Courts and competition starts at 10 a.m. each of the three days.