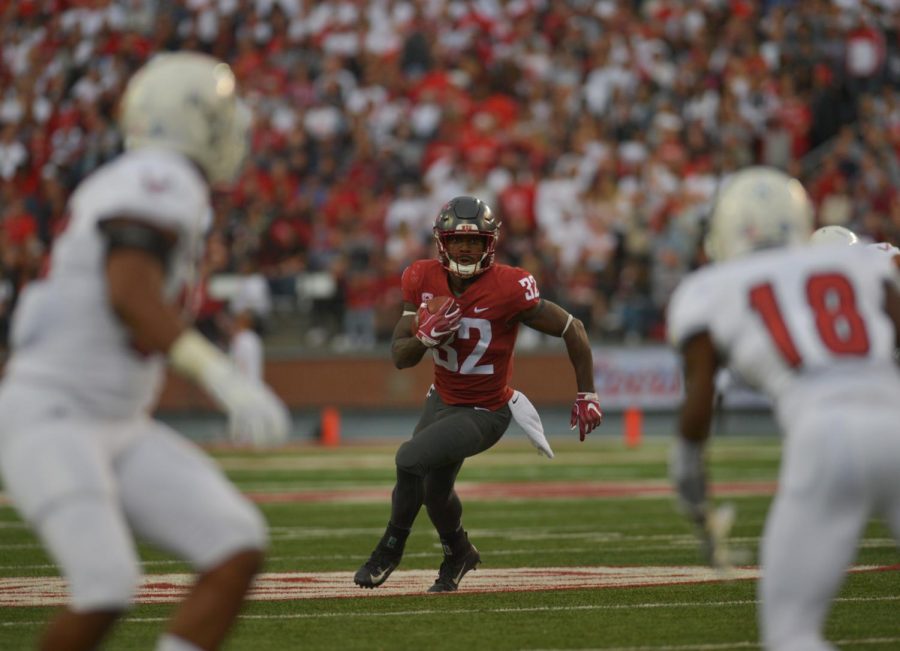 Redshirt junior running back James Williams looks for an open route as he makes his way down the field in the game against Eastern Washington University last Saturday at Martin Stadium.

Just a few miles away from the bright lights of Hollywood, WSU football looks to light up the California sky come game time against University of Southern California on the big stage of the Los Angeles Memorial Coliseum.

“All our guys are looking forward to the challenge on Friday,” Head Coach Mike Leach said.

The Cougars, currently 3-0, look to keep up their undefeated start after an impressive performance against Eastern Washington University last Saturday night which resulted in a 59-24 win over the Eagles.

The Trojans have been headed in the opposite direction of late. After winning its first game of the season against University of Nevada, Las Vegas, USC has struggled since with back-to-back losses on the road against Stanford University and the University of Texas at Austin.

However, it will not be an easy task for WSU to start Pac-12 conference play against USC. The Trojans are looking to exact some revenge on their home turf against the Cougs after then-No. 16 WSU pulled off a major upset of then-No. 5 USC at Martin Stadium last year.

One key member of the WSU team this season who was not part of last season’s shocking win is the new leader of the Air Raid offense, quarterback Gardner Minshew II.

As a graduate transfer, Minshew has looked very calm in the Air Raid offense. He was named the Pac-12 Offensive Player of the Week after completing 45 of 57 pass attempts for a career-high 470 yards and two touchdowns against Eastern Washington.

His counterpart on the Trojan offense is 18-year-old true freshman quarterback JT Daniels. Daniels was a hot topic of conversation this past year after he reclassified himself as a senior during his junior year of high school to enroll early at USC.

Last year Leach had the challenge of trying to stop future NFL first-round draft pick Sam Darnold as quarterback for USC. He knows he will face another test Friday night in Daniels.

“I think he is a real talented guy and he does a lot of good things, so we need to find a way to affect him,” Leach said.

Redshirt sophomore safety Skyler Thomas, who currently leads the team in tackles, knows going up against the Trojans young quarterback will not be an easy task on defense.

“Everyone is capable of having a good day if we allow them to,” Thomas said. “We need to make sure our coverages are locked in and we just do our job because he’s actually looked pretty good on film for a true-freshman.”

However, USC is loaded with a lot more talent than just the quarterback position. The WSU secondary will have its hands full with explosive freshman receiver Amon-Ra St. Brown, who has averaged over 100 receiving yards per game so far this season.

On the defensive side of the ball, the Trojans will be without their star senior linebacker Porter Gustin for the first two quarters after he was ejected in the second half of last week’s game for a targeting penalty, which carries over into the first half of Friday’s game. However, they still have a formidable defense even though they have yet to come away with an interception this season.

Leach did not shy away from the fact that USC is good on both sides of the ball.

“Defensively, they’ve got people returning in all three phases at the defensive line, linebacker and in the secondary, so it’s not like everyone left at once,” Leach said. “On offense, they are always explosive, they have explosive players that if you don’t keep an eye on they can get a lot of yards real fast.”

In the history of this matchup, USC has dominated the series with a 58-10 record against the Cougs. However, WSU has won two of the last three contests against the Trojans under Leach, including the last time these two teams met in the Los Angeles Memorial Coliseum in 2013.

“USC is a good team and all we can do is play the best game we can and try to isolate it to one play at a time,” Leach said. “Having the discipline to do that is easier said than done, but that’s all we can really control and that’s what we have to do when we play them.”

The team looks to leave Los Angeles with a Hollywood ending of its own: a huge victory to start conference play against USC and remain undefeated.

The Cougs have a tall task ahead of them, but they are ready prove that last year’s upset win against the Trojans was no fluke and that they are ready to compete for a Pac-12 Championship.

Kickoff is set for 7:30 p.m. Friday in Los Angeles. The game can also be seen live on ESPN.