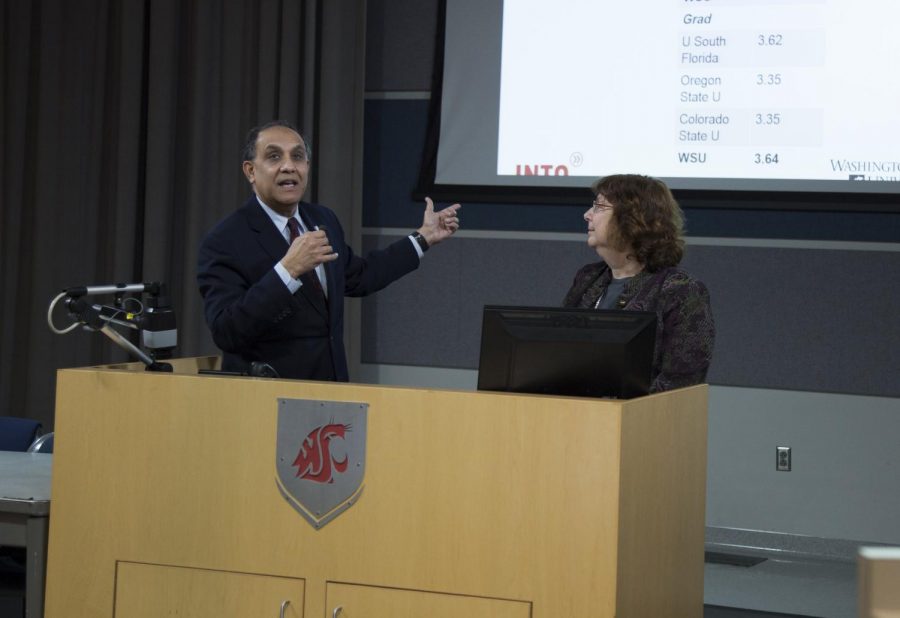 Asif Chaudhry discusses the success of the INTO student program at a Faculty Senate meeting Jan. 11, 2018.

WSU is seeking to increase the number of international students in its second year partnering with INTO, a private global education company.

Asif Chaudhry, the vice president for international programs, said WSU is currently at 7 percent international students compared to the top 25 research universities with an average of 18.6 percent.

“That enrichment plays into how well the student body interacts and performs,” Chaudhry said.

The number of students who came through INTO last fall was about 152 new students and just over 100 in spring, Chaudhry said.

During an interview with The Daily Evergreen staff, WSU President Kirk Schulz said WSU opted to contract with INTO instead of spending resources on building up staff.

“We could not put the resources in to get the growth that we would like to over the next 10 years without this partnership,” Schulz said.

According to INTO’s website, the company has 130 staff in 30 regional offices that manage over 600 recruitment partners in 75 countries.

Chaudhry said the partnership is intended to grow the university, not displace any students who grew up in-state. He also said it helps WSU create an interconnected world on campus.

“We want students to be global citizens,” Chaudhry said. “The only way to do that is either we expose them to the world, take them all over for study abroad programs or somehow we bring the world to them.”

At WSU, the INTO program primarily serves graduate students but also a small number of undergraduates. Among the application requirements, students must take an English proficiency exam.

Some students recruited by INTO meet WSU’s admission requirements, meaning they can start their program as soon as they arrive in Pullman or at one of the other campuses.

However, other students that might need academic help or have trouble with English have an opportunity to prove themselves before enrolling. This is done through a “pathway” program that is administered by both WSU and INTO.

The pathway program can last one or two semesters depending on a student’s performance. Chaudhry said it is like a probationary period for international students who might otherwise miss any chance of attending WSU.

“WSU still has absolute and total control over the process of admission,” Chaudhry said. “If a student meets the requirements, then they are moved on to degree-seeking status.”

Schulz said he could not give the exact breakdown of how much money the university makes after INTO, but the revenue does make a difference.

“I don’t want people thinking ‘well, you’re just doing it for the money’ but the financial implications for a program like that are important,” he said.