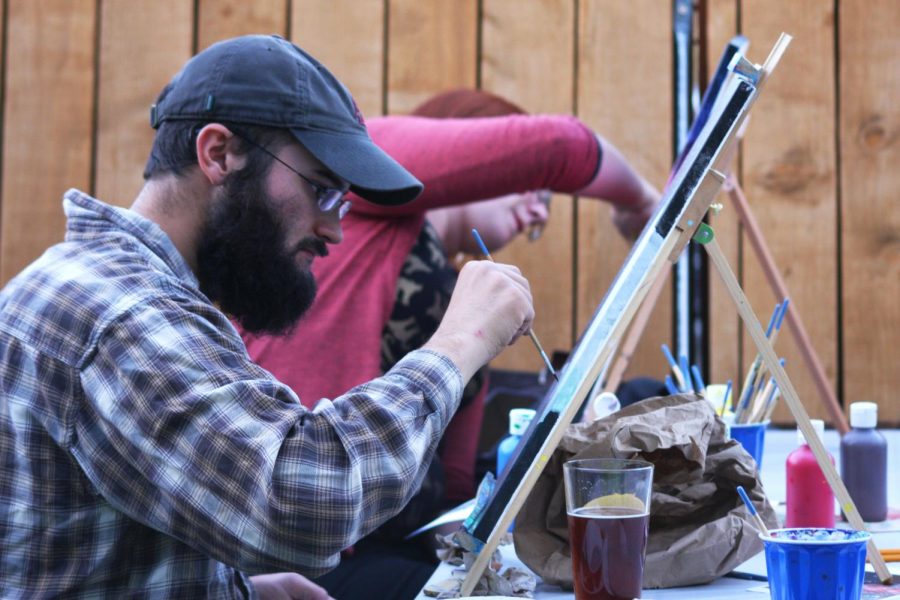 The patio of Paradise Creek Brewery’s Trailside Taproom was set up with rows of blank canvases in preparation for its first-ever Brushes and Brews event Tuesday.

Emily Dennis was hired in May to coordinate events for the brewery and said she came up with the idea of customers drinking a pint of beer while expressing themselves in art.

“I knew people who did a paint-and-sip sort of thing with wine,” Dennis said. “That was something I thought would be cool but with beer. You’re not as uptight about painting like a perfectionist.”

Dennis enjoys art herself, but she said she reached out to an art studio in Moscow named Wild at Art for help. Wild at Art could provide the painting supplies and instruction that would let people make something they are proud of.

“From what I’ve seen from these art classes, people do walk away with something,” Dennis said. “It may not be, ‘I’ll-hang-this-up-in-my-living-room’ good but it’s still something.”

Wild at Art owners Joan Hofmann and Donald Stanziano stayed for the entirety of the event to offer guidance on people’s artwork. Hofmann said she is glad she can go to events like these again.

Hofmann started her business in 2005 and sold it after seven years. She and Stanziano bought it back again last year.

“I really missed it,” Hofmann said. “We’re both community-minded people.”

Hofmann said she was especially glad to team up with Paradise Creek Brewery after she met its owner when she sang at a wine bar.

“I love it,” Hofmann said. “I love how it’s a little separated from the university, and I love to come out here in the heat of the summer, sit out and have a beer.”

As he explained to the small crowd of painters how to mix colors, Stanziano said his artistic philosophy helps people enjoy themselves.

WSU senior microbiology major Melissa Gallardo said the event was the first time she painted. She appreciated the freedom Stanziano and Hofmann provided.

“You can be free,” Gallardo said. “You can do whatever you want but [Stanziano and Hofmann] are still there. If they were actually doing it step-by-step, it probably wouldn’t be as fun.”

Gallardo found out about the event after attending a Wild at Art pottery class and wanted to take her boyfriend out for their three-year anniversary. Both of them sat side by side as they used their own techniques to emulate the example — a skyline portrait provided by Hofmann.

Timothy Cottrell said after he attended a painting event at a winery in Coeur d’Alene he couldn’t wait to paint again.

“I had a good time,” Cottrell said after the event. “So coming to this? No contest, easy decision.”

Instead of a moon, Cottrell’s skyline had a large eyeball that loomed over his city landscape. He said painting was a way for people to indulge in their own self-expression and was particularly important for college students.

As the night progressed, the canvases became more and more complete until everyone produced a unique, finished product. Dennis said what made these events so worthwhile was bringing so many different people together.

“It isn’t about the profit,” Dennis said. “It’s just giving people a good time, making a good place for people to come and enjoy themselves.”