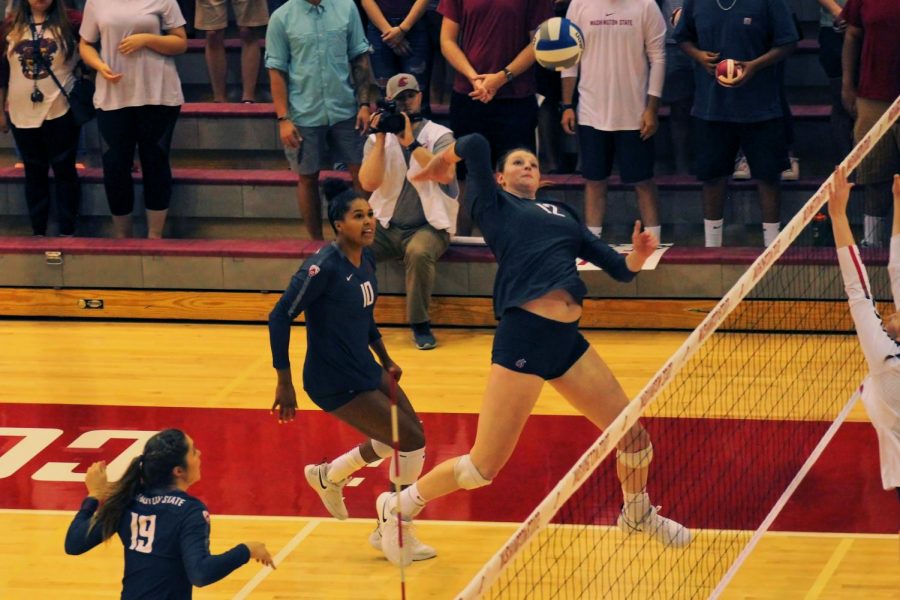 No. 22 WSU women’s volleyball took on No. 13 University of Washington on Thursday in Seattle. The team was ultimately defeated in the fifth set.

The first conference match of the year for the Cougars (9-2) didn’t end how they hoped it would, but they showed a lot of heart as the Huskies (9-2) won in five sets.

Set one was intense and saw sloppy play at the start from UW. Some early service errors helped the Cougars take an 5-4 lead before a challenge by the Huskies changed momentum.

WSU battled back after a timeout with some big kills by senior middle blockers Ella Lajos and Claire Martin. The surge was not enough however as the Huskies won the first set 25-18.

Lajos ended the set with three total kills and three other Cougs totaled two each. The second set was more of the same as it was back-and-forth early.

Down 11-15, the Cougars once again came out of a timeout strong and got to work. Just as WSU got back to playing its brand of volleyball, the Huskies had a run of their own.

After a late timeout down 15-22, the Cougars tried to create some offense and get back in the match. UW’s blocking was too much for the Cougs to overcome and the Huskies won 25-17.

Trailing two sets to none, WSU took its first two-point lead of the night at 9-7. Senior outside hitter Taylor Mims had a big kill and showed good serving to help get the Cougs to that lead.

Head Coach Jen Greeny had a failed challenge, but that didn’t stop WSU as it extended the lead to 14-10. The team never looked back from that lead and used some big blocks to take the third set 25-19.

Starting the fourth set, the Cougs’ early attack had the Husky defense spread all over the court for a 7-3 lead. WSU extended this lead to 14-8 forcing a UW timeout.

Nothing changed coming out of the timeout as everything continued to go WSU’s way. The Huskies forced four set points, but the Cougars’ lead was too much to overcome as they won the fourth set 25-16.

Tied at two sets apiece, the fifth set started out with the two teams trading points until the Huskies pulled ahead 7-4. Greeny called a timeout and won a huge challenge changing the score from 9-4 to 8-5.

A long rally won by WSU changed the course of the set, closing the lead to just 8-6. However, UW took back over and won rally after rally.

UW eventually took the set 15-9 and the match 3-2. Although the Cougs lost the match, coming back from a 2-0 deficit on the road against a highly-ranked opponent to force a fifth set is good news for the team.

The Cougs will look to change their two-match losing streak as they head to Matthew Knight Arena to face No. 12 University of Oregon at 12 p.m. Sunday.