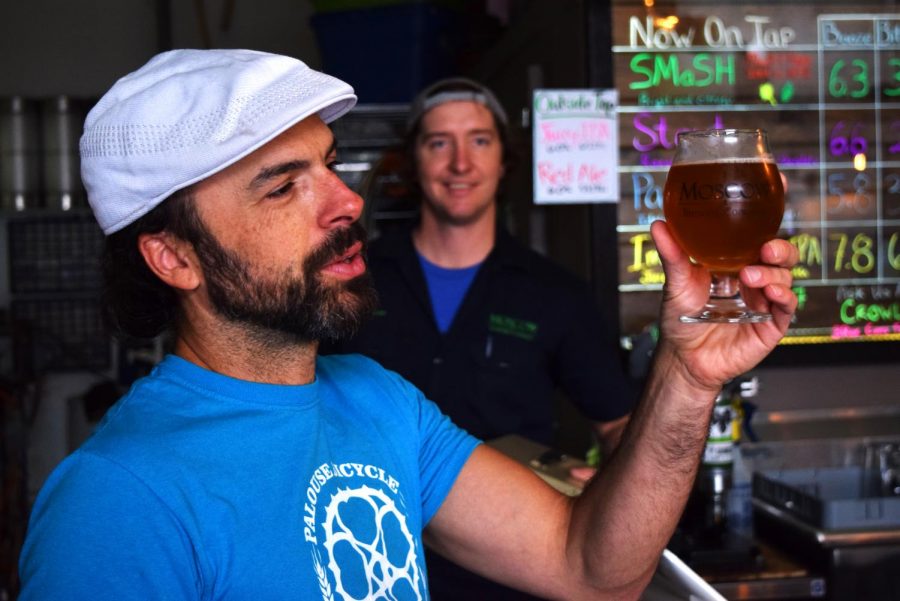 The brewing company has undergone a lot of changes over the last few years, with the business shutting down completely only to be reopened months later by a trio of homebrewers. Ever since, they have made it an annual tradition to celebrate their September and October birthdays.

Co-owner Andy Severson said he appreciated having the event because of the rich history it has for him and the other two owners, his sister and her ex-husband.

“It reminds us of back in the day,” Andy said as he served beer from the bar. “When this event was happening in our garage and we’d be brewing beer for weeks leading up to the event and have a really fun day together.”

Andru Gomez and djmoonraye arrived to provide the entertainment while Duke’s Place food truck began setting up for the crowd of people slowly trickling onto the open patio.

Many appreciated the entertainment provided, but Andy said he believes the most important aspect of the Moscow Brewing Company experience is in what it lacks: TV’s.

“It keeps the quality of the conversations higher,” Andy said. “People are just sitting and chatting, talking about current events, things are interesting to them. Without TVs dumbing things down, it makes for really interesting conversation in the bar room.”

Andy said the small space of the brewery allows people to enjoy a more intimate experience. Patrons often sit with people they don’t know and make friends that way.

“It uses lion-malt,” Hart said. “It’s a hyper-local malt variety that makes it the base of the beer.”

To Hart, a brewery isn’t just about making beer. He said a brewery is about more than providing the Palouse with a great place to get a drink. It’s also about working with the farmers, professors and grocery store workers in the area.

“We’re just your community stomping grounds for drinking beer,” Hart said as he poured a sample of the Juicy IPA.

Co-owner Leah Severson wanted to maintain the same good relationship the old ownership had with Moscow as a community.

“We want to keep it really personal,” Leah said. “It’s a lot of work, more work than people realize, but we try to keep lots of things going on and it’s new and exciting. We stay busy and we just try to make it work the best we can.”

Marie Reed was a first-time attendee to Moscow Brewing Company on the day of the event and said she really enjoyed the beer being produced.

“All of it has a lot of flavor to it,” Reed said. “None of it tastes watered down. It’s a very full-bodied taste.”

Reed said she especially enjoyed the smoky flavor of the stout. With her birthday falling on Oct. 6, she was glad she could celebrate with the owners.

The appreciation of the stout was shared by Vanessa Ward of the Duke’s Place food truck who baked a cake made from the beer that the trio had been serving for years.

Ward said she’s had an appreciation for the brewery ever since her husband visited it after parking the food truck to clean out the fryers.

“He said, ‘honey, Moscow Brewing Company is open and man, do they have good beer,’ ” Ward said.

Not being a beer drinker, Ward said she was skeptical to give the beer a shot, but after she tried a scotch, she couldn’t stop coming to the brewery.

“Now we fight over who cleans the fryers,” Ward said. “It’s a one-man job but we both end up doing it, just to have Moscow Brewing.”

As the evening continued and the patio of the brewery became more crowded, djmoonraye lifted his glass to toast the birthdays of each of the owners.

“I’ve got to see this from the ground up,” he said. “I just wanted to represent all these guys and say Moscow Brewing Company is alive and well. Happy birthday guys.”