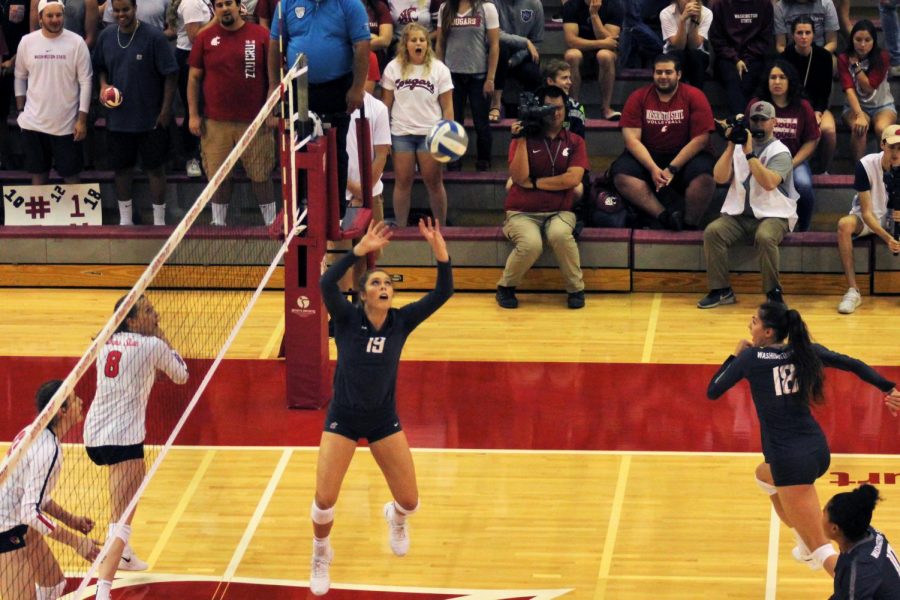 WSU junior setter Ashley Brown sets up the volleyball for a spike against Illinois State University at the Cougar Challenge on Sept. 7 in Bohler Gym.

No. 22 WSU volleyball fell only three points short of the victory in the fifth set of the match against No. 12 University of Oregon on Sunday. The team traveled west for the weekend to face the University of Washington and Oregon but ended with two more losses added to the record.

The Cougars started the first set of the match with a 25-22 victory over the Ducks. In this set, both WSU and Oregon tied with 15 kills and five errors; however, after trailing for the first eight points, the Cougars managed to grab a lead and keep it for the remainder of the set.

In the next set, the two teams battled back and forth alternating who held the lead until Oregon took control in the end and finished with a 25-22 win over the Cougars. Although WSU had two fewer errors, Oregon ended the match with 14 kills over the Cougars’ 11.

WSU grabbed its second win of the match in the next set as it topped the Ducks 25-22. The Cougars came out with a 5-0 run, giving them enough momentum to keep the lead throughout the rest of the game.

The fourth match ended with a final score of 25-23, with Oregon having 18 kills, the high for the entire match. With the intensity generated throughout the match up until then, the back-and-forth battle resulted in five busy sets between the two teams.

This high-intensity competition carried into the final match as the two teams battled to see who would come out on top. The Ducks started the match with a 5-1 run until the Cougars came back with a 9-7 lead. However, Oregon had a 4-0 rally that gave it the lead for the remainder of the game.

The five-set match was a constant battle as both teams aggressively attacked on offense and put up numerous blocks. The final stats resulted in WSU having 65 kills and 14 blocks while Oregon had 71 kills and 10 blocks.

Although the Cougars faced a challenging weekend, the team’s performance was pleasing to Head Coach Jen Greeny.

“Oregon is a great, great team, but [we’re] just proud of our fight, just unfortunate we couldn’t come out on the top side of it today,” Greeny said. “We did exactly what we wanted to do in limiting their hitting percentage but it comes down to those couple point here or there.”

The Cougars will come back at home for their next match against Utah 7 p.m Friday in Bohler Gym.