Backup goalkeeper dazzles against No. 8 UCLA to earn honors 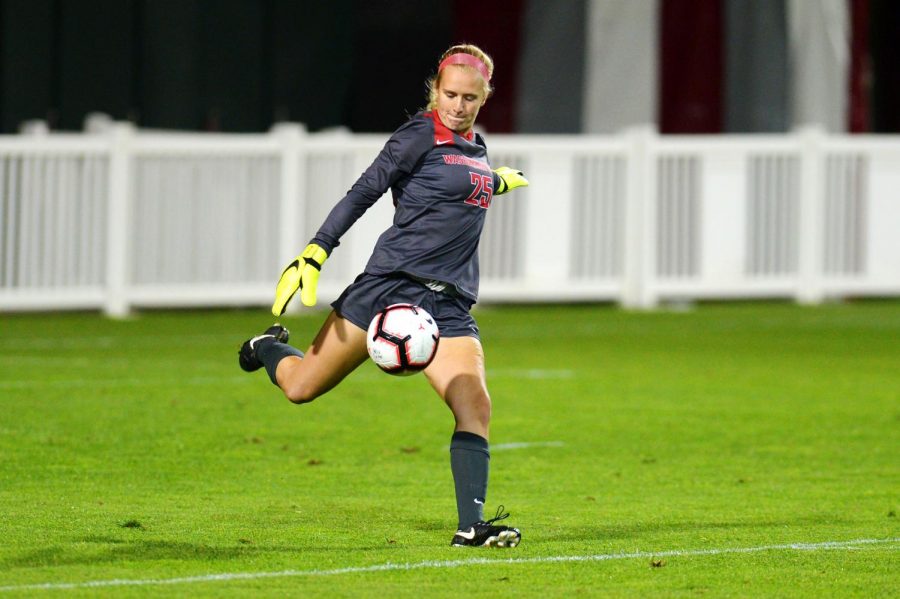 Redshirt junior goalkeeper Rachel Thompson drop kicks a ball back to midfield during her first game of the season against University of Idaho on Sept. 6 at the Lower Soccer Field.

The Evergreen Athlete of the Week for Sept. 16-23 is WSU redshirt junior goalkeeper Rachel Thompson.

After redshirt senior goalkeeper Ella Dederick was shelved due to an injury suffered while playing against University of Idaho on Sept. 6, Thompson stepped into fill Dederick’s position. Since then, Thompson has put in the work to be a key player on the Cougar team.

“It’s a big role to fill but I mean I have had college experience before,” Thompson said. “It has just been really intense because I never know what is going to happen, but it has been really fun through the whole process. It’s really a big shame that [Dederick] got hurt but I was ready to step into the role whenever my time came.”

WSU soccer started Pac-12 conference play Friday when it hit the road to face No. 8 University of California, Los Angeles. The Cougars ended the night scoring the lone goal which was enough to take home the win as Thompson earned a shutout.

The high-intensity attack the Bruins’ offense employs meant WSU had to have a stellar defensive game. With UCLA putting up 19 shots against the Cougar defense, Thompson’s performance had a major impact on the team’s victory.

“The defense was across the board from front to back and you know she had some key saves and some key moments,” Shulenberger said. “For her to do that in the first Pac-12 game was definitely something she needed and the team needed to rally around. She showed us why she’s here and why she’s doing a good job.”

In only her third career start as a Cougar, Thompson achieved her first solo shutout against UCLA along with the nine saves resulting in a career-best for the redshirt junior. Thompson’s career-best is the most saves a WSU goalkeeper has had since Dederick tallied 11 saves back in 2015.

Thompson and the Cougars will be back in Pullman 7 p.m. Thursday at the Lower Soccer Field to take on University of Oregon looking to keep their undefeated record intact.