How to handle college relationships, from university couples 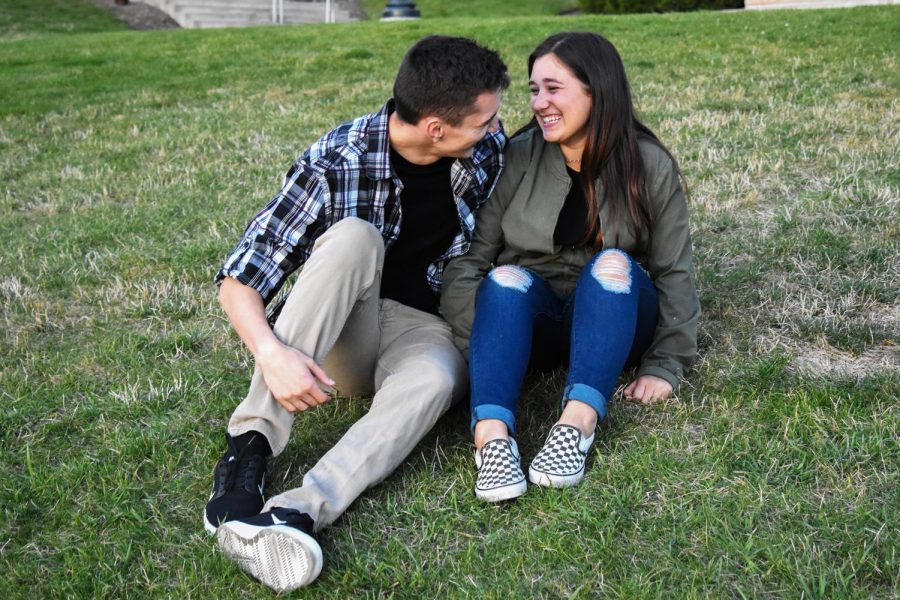 WSU freshmen Austin Pomeroy, left, and Angela Guadamuz enjoy an evening out on the grass. Relationships in college offer many positives but can also pose barriers.

To some, a committed relationship can draw up powerful imagery of what they have seen on television or heard on the radio, but what makes a relationship reach those truly special heights?

WSU student “D.C.,” who chose to remain anonymous while talking about her three-month long-distance relationship, pointed out that relationships in general are not easy to maintain. College only adds to the pressure.

“Long distance relationships are f-cking hard,” D.C. said. “There is so much more trust there than in a relationship where you see the person every day. You trust that person to not do something stupid, but you also know you’re not going to do something stupid as well. And knowing if you cross that line, you’ll probably never see that person again.”

D.C. said she was thankful for the strength of her relationship and likes to talk about her day with her guy in California while being there to support him as well. She attributes part of the reason she has a healthy relationship with how flexible she and her partner are.

“I don’t know how to describe my relationship without sounding weird because we don’t call each other boyfriend and girlfriend,” D.C. said. “I just say, ‘That’s my guy’ and he refers to me as his woman. It’s not a rigid or defined sort of thing. We’re just together and we’re happy to be together.”

Roberto Flores, a WSU sophomore studying cultural and ethnic studies, has been on campus with his girlfriend for almost two years. He said it was difficult to give relationship advice since even something as simple as giving flowers could be a mistake if the other person is allergic.

“I’d say there are guidelines that can help,” Flores said. “But there aren’t many one-fit-all rules.”

Flores said the most important thing in his relationship is taking time out of the day to communicate.

“My girlfriend likes to talk daily so that’s what I do,” Flores said. “Normal conversation. Nothing extravagant. It’s not necessary to try to overdo everything all the time.”

When things are not going well in a relationship, Flores said communication becomes even more important. Not everything personal has to be shared, but if it affects the other person they have a right to know.

The emphasis on communication was also shared by WSU seniors Melissa Gallardo and Connor Wright, who celebrated their three-year anniversary Thursday.

“As corny as it is, communication is number one,” Gallardo said to Wright, who sat next to her. “It’s silly but if you’re doing something I don’t like necessarily, it’s hard for me to say that. I can see that a lot.”

Wright said he and Gallardo spend at least an hour each day together to unwind.

“We definitely had times during finals week where we didn’t see each other very much,” Wright said. “That was stressful for both of us, not just the finals but not seeing each other.”

A positive relationship requires attention, but Wright said one of the problems people run into is committing to a relationship too quickly. They invest themselves in a relationship before setting standards or before knowing who their partner really is.

A lot of what people hear from relationships are positive, but D.C. said students shouldn’t be in a rush to enter a relationship. For her, one day the dynamic she had with her best friend was “different,” and the relationship organically grew from there.

“I think people all eventually end up where they’re going to end up,” D.C said. “There are so many factors you can’t even consider, but then when you’re with the right person? It’s just not even something you worry about.”