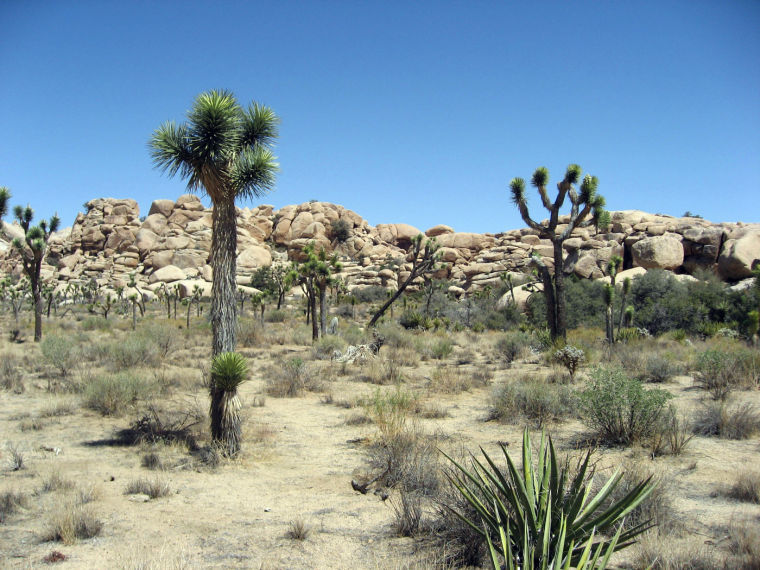 Thousands of Joshua trees rise from the otherwise spare landscape of the Mojave Desert at Joshua Tree National Park in southeastern California.

Arid ecosystems absorb an unexpectedly large amount of carbon dioxide as levels of the gas rise in the earth’s atmosphere, according to research led by a WSU biology professor.

The study took place over a 10-year period in the Mojave Desert, where scientists fumigated plots of land and observed the collective response of plants, soil and other organic material. Biology professor Dave Evans, who specializes in ecology and global change, led the study.

Evans said the study, which has been published in the journal Nature Climate Change, was longer than almost all studies of its kind.

“The biggest challenge in the carbon budget is understanding what’s happening to terrestrial systems,” he said. “This study will help us make better predictions of what is going to occur in the future.”

Researchers fumigated three of the plots with 550 parts per million of carbon dioxide, which is close to the concentration predicted in the year 2050. Evans said that figure today is 399.5 parts per million.

In order to measure how much carbon was absorbed, the researchers dug one meter into each plot and analyzed the excavated material.

“There was definitely some dirty work at times,” said Benjamin Harlow, a biology research assistant. “It was totally worth it to get to be a part of that.”

The researchers found that when levels of carbon dioxide rise, arid ecosystems might account for between 15 and 28 percent of the amount currently absorbed by land surfaces.

Post-doctoral associate Virginia Jin said the rate at which arid ecosystems could store carbon might come as a surprise, as deserts contain little plant growth.

“People don’t think about it being stored in a really, really dry place like the desert,” Jin said.

While the amount absorbed in the desert is far less than that of a dense rainforest, Jin said the impact of arid ecosystems is substantial.

“It’s like we’re trying to put together a puzzle with a lot of pieces missing,” she said. “We’re trying to add some of the pieces to make better predictions for the future.”

The experiment was unique in that it forced the ecosystem to handle quickly increasing levels of carbon dioxide, Jin said.

Jin said the study was an enlightening experience.

“It was my first time being in a desert,” she said. “I’ve never been in a place where I was deafened by silence.”